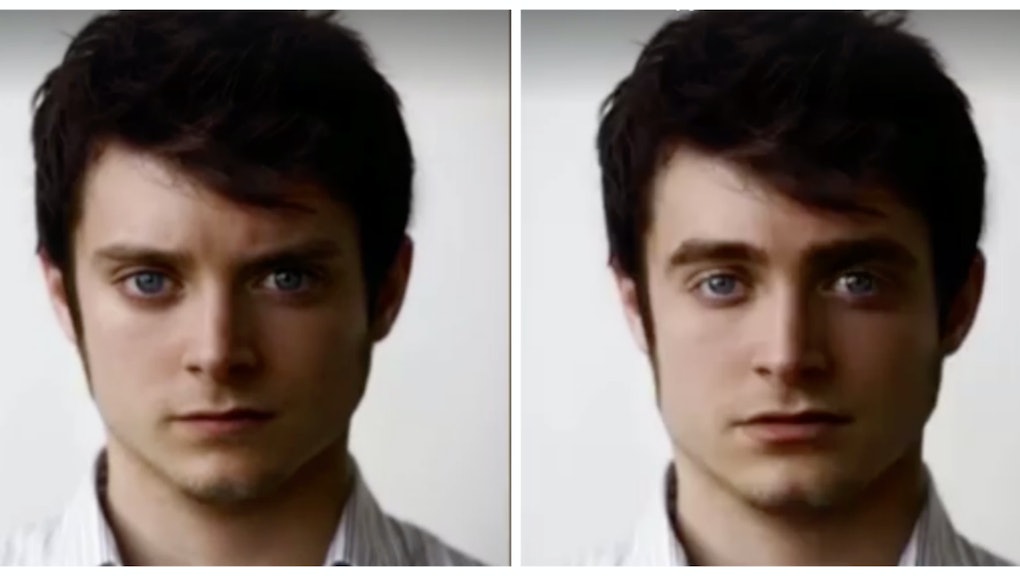 Turns out Frodo and Harry Potter have a lot more in common than just gathering dust on your old DVD tower.

A GIF depicting the faces of actors Elijah Wood and Daniel Radcliffe morphing back and forth circulated the internet after first surfacing on Reddit on Thursday.

There's no doubt that the two actors could star in a much-more-convincing remake of Face/Off — the only major differences between the two faces are the jawline, size of the lips and the arch of the brow.

But, in the age of #OscarsSoWhite, backlash over a black Hermione and Scarlett Johansson headlining a film playing an Asian character, the GIF exposes a larger truth: Hollywood loves its similarly-faced white actors.

The internet has explored — and parodied — the similarities of Hollywood's leading white men before. In 2015, Twitter tore into Ryan Murphy's American Horror Story for selecting a cast that skewed closer to a Midwest lacrosse team than a TV show produced in the 21st century.

Just like Radcliffe and Wood, each of these men is dark-haired, strong-jawed and very, very white.

That so many famous actors fit this (admittedly broad) description stings more when you realize how much people of color ache for representation on screen. Fans just want Idris Elba to get a chance to play James Bond, for Constance Wu to play a leading lady and for John Cho to get the girl. Of course, stereotypes about Asian masculinity and Asian women stand between Cho, Wu and their chance at mainstream stardom.

Even worse: Johansson's Ghost in the Shell role — along with Tilda Swinton's role in Marvel's upcoming Doctor Strange — proves that, even when roles are meant for actors of color, they may still lose out on them.

As evidenced by the Wood/Radcliffe GIF and the American Horror Story meme, having a strong jaw and pale skin means never having to worry about losing out at all.