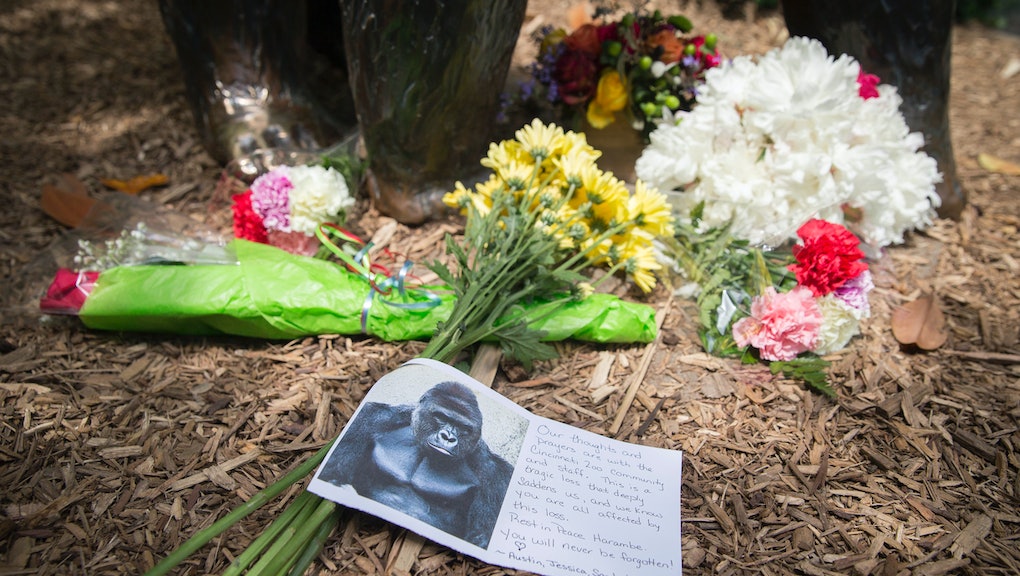 A 400-pound Western lowland silverback gorilla named Harambe was shot and killed by staff members at the Cincinnati Zoo after a 4-year-old boy fell into the gorilla exhibit Saturday.

Read more: A Male Gorilla Was Killed in Order to Protect a Child That Fell Into His Enclosure

Now, the mother of the boy, who was seen being dragged by Harambe in the exhibit before the gorilla was shot, has allegedly spoken out online.

Michelle Gregg, a woman claiming she is the mother of the 4-year-old, wrote a Facebook post screengrabbed by Mic staff writer Philip Lewis and cited by the New York Post before her account was deactivated. She thanked everyone for their prayers for her son.

"What started off as a wonderful day turned into a scary one," she wrote. "For those of you that have seen the news or been on social media that was my son that fell in the gorilla exhibit at the zoo. God protected my child until the authorities were able to get to him."

"My son is safe and was able to walk away with a concussion and a few scrapes... no broken bones or internal injuries."

The gorilla, meanwhile, wasn't so lucky.

Already, there is a petition calling for #JusticeForHarambe over on Change.org that has more than 144,000 signatures at the time of publishing this article. The petition specifically calls for the parents of the 4-year-old boy who fell over the barrier into the exhibit to be held accountable for Harambe's death.

In Gregg's post, she addresses this exact idea, saying that society is often quick to judge parents when incidents (like, presumably, what happened on Saturday) happen.

"Accidents happen but I am thankful that the right people were in the right place today," Gregg wrote. "Thank you to everyone that helped me and my son today and most importantly God for being the awesome God that He is."

With the petition itself only gaining traction, it appears as though not everyone (especially on the internet) feels that great about what transpired on Saturday. The petition has been up for less than 48 hours, and a Facebook group, also called Justice for Harambe, currently has more than 56,000 members. On Twitter, thousands are using the hashtag #JusticeForHarambe to voice their own opinions on the matter.

Already, the internet's outrage over Harambe's killing is drawing parallels to the killing of Cecil the Lion, for which there was a petition similarly demanding justice for the lion in Zimbabwe that was shot and killed by a hunter, and that petition eventually earned more than 1.1 million signatures.

So don't expect this story to resolve itself anytime soon.