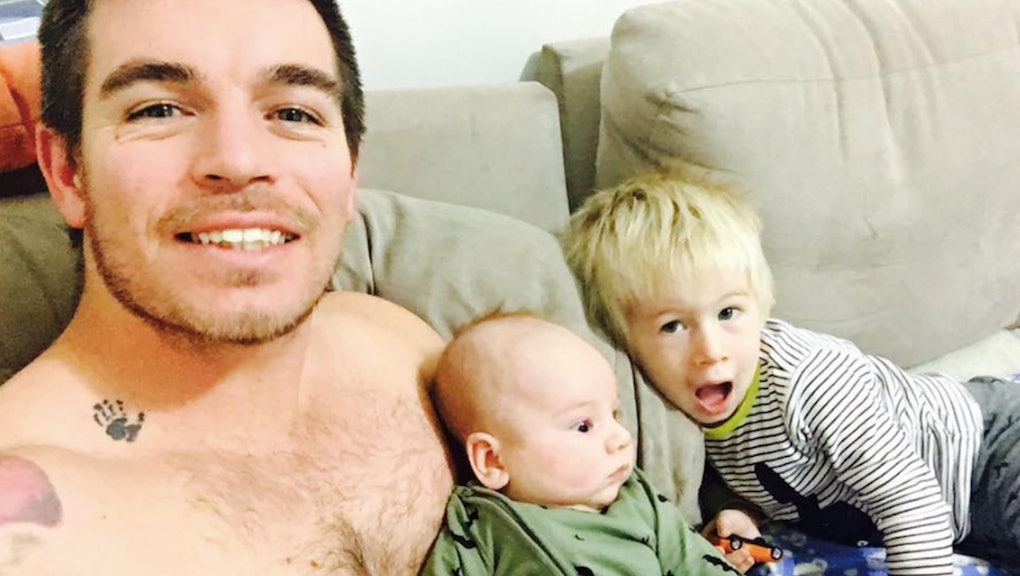 Dad Quickly Learns the Struggles of Being a Stay-at-Home Parent, and It's Going Viral

When Brad Kearns' wife Sarah fell sick, he took on the responsibilities of both parents — for 24 hours — and quickly learned of the trials and tribulations single parents and stay-at-home mothers often face (not least among them, sleep deprivation).

In a Facebook post chronicling his short-lived journey as a single parent, Kearns said he realized the imminent doom he faced as the sole caretaker of his two boys from the very moment he stepped foot in the house. In the story, which has since gone viral — and launched Kearns' new "DadMum" page — the father recounted his perilous night looking after Knox and Finn.

Read more: Can You Spot Why This Super Empowering Breastfeeding Photo Is Going Viral?

Kearns played a DVD for his 2-year-old Knox almost immediately after returning home from work — really the only time he would have any level of serenity throughout the night. As for his 6-week-old Finn, all he could do was pray he would stay asleep.

"As the night rolls on and my patience wears thin; I reduce myself to keeping Knox quiet by allowing him to place stickers on my (very hairy) legs," Kearns wrote Sunday. "'It's okay, I can shave them off in the morning' was the thought. 'Just don't wake Finn.'"

Of course, Finn awoke, and immediately "fucking screams from the high heavens...as if I've thrown him at a wall by his legs," the dad wrote.

His frustration and self-proclaimed failure quickly turned into embarrassment early the next morning, when his mother-in-law visited to check on the boys. "Have you ever been in a situation where someone walked in on you doing something you shouldn't be?" Kearns asked. "That's the feeling I got when I opened the door to my mother-in-law ... I have not even mastered the ability to keep my own personal hygiene as a mum, let alone the ability to keep a house, educate children, prepare meals and even venture outside for activities."

His post has since been shared over 16,000 times, and helped him surpass 51,000 followers on his new blog. Still, we're hoping for a quick recovery for Mrs. Kearns — and praying this "dadmum" will find time to read a parenting blog or two.