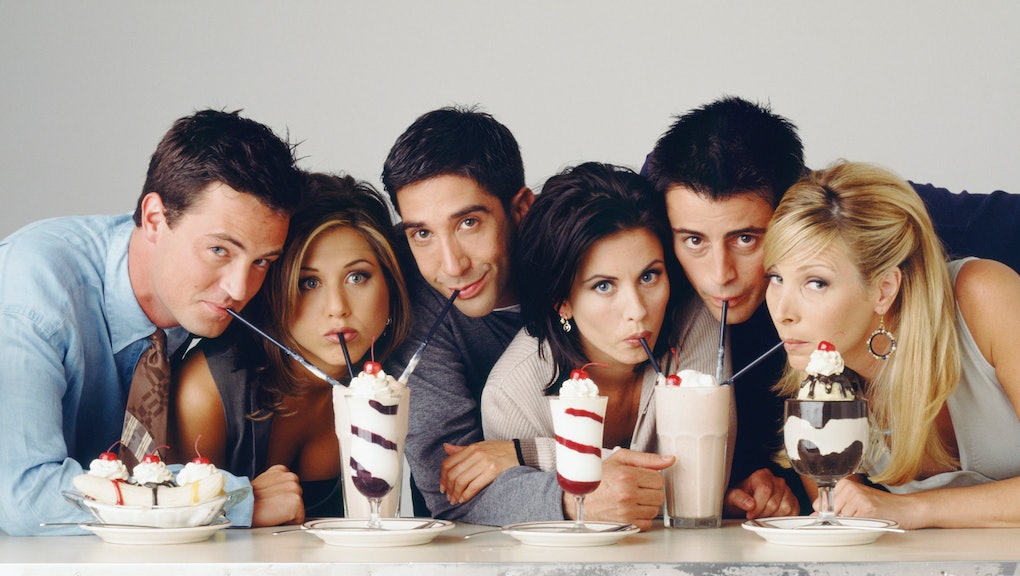 Did 'Friends' Even Actually Happen? 5 of the Wildest Theories About the Beloved NBC Sitcom

When talking about pop culture theories, movies and shows with deep mythology come to mind first. Think Game of Thrones, Harry Potter or Star Wars, for instance. But that's selling the internet short: It's got theories for everything.

Take Friends, for instance. The smash hit '90s sitcom has 10 seasons and 236 episodes to parse through. Out of this, fans have developed some truly wild theories about the show. These are the five most jaw-dropping.

One of Monica's defining characteristics was her obsessive-compulsive need to clean and organize. Yet in talk of the past, one Reddit user noted, she doesn't seem to be nearly as defined by her OCD.

The Reddit user came up with a theory: After Monica slimmed down (having previously been overweight), she gained obsessive-compulsive tendencies. This could be because she needed a new compulsion to distract from eating, for example. It's an interesting theory — maybe reads into inconsistent writing a bit too much, but hey, that's what theories are for.

Phoebe Buffay is a genius.

Is Phoebe as much of a ditz as she seems? Not according to the theorists who believe she was a genius. Whole arguments, as seen above, have been put together to support the belief she's actually quite smart — she just doesn't desire to challenge herself.

"I started watching episodes I'd seen a million times already with the assumption that Phoebe was a laid-back genius with almost zero ambition," one Reddit user wrote, picking out an instance where Phoebe argued with Ross over whether evolution was a flawed theory. "She amuses herself by playing one off the other, not unkindly, but for her own amusement."

Or, Phoebe Buffay was a meth addict.

Another Twitter user also imagined an alternate explanation for Phoebe's behavior. She was a meth addict without a home who desperately sought friends. The ending of the show, outlined in a viral tweet, would have taken viewers out of her imagination and broken the illusion.

"She returns to the park, where she sleeps in front of the fountain," the user wrote, referencing the infamous fountain from the opening theme. "From behind, we see her put up six dirty, but brightly colored, umbrellas. Fade to black."

This is one of the bigger bummers: a theory that tries to explain Ross' son Ben's absence from the last 50-or-so episodes of Friends. Inspired by True Detective season two of all things, the theory supposes that Ross lost custody of his child.

This explains some of his bizarre behaviors, including his homophobic jokes (since his ex-wife Carol was a lesbian) and his MRA-esque tendencies. It's a dark theory. Not quite meth dream-dark, but still pretty brutal.

This one's a bit like the second Phoebe theory, but with less meth. It's also pretty cute: Friends is actually a bunch of young people hoping for the future. It's all an imagined version of what their lives will be. This gives what was a relatively safe, sweet pal-comedy an aspirational veneer, especially for the young people watching it both then and now. You can imagine the greatest dreams for your life — as long as you're doing it with your friends.