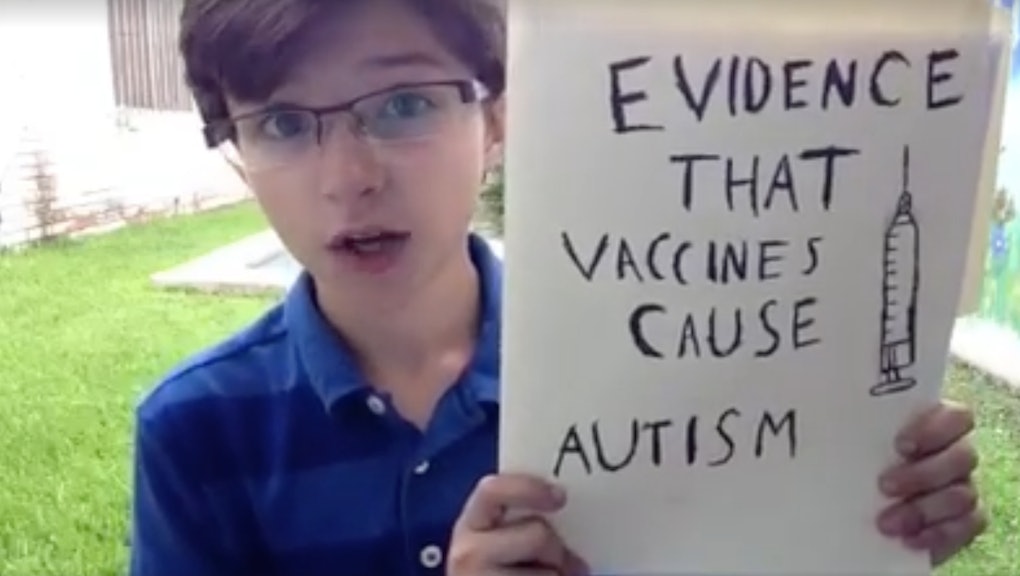 Many people share the unfounded belief that vaccines cause autism.

The idea has caught many in its clutches, from celebrities like Jenny McCarthy and Kristen Cavallari to presumptive Republican presidential nominee Donald Trump. But those anti-vaxxers just got schooled — by a 12-year-old kid.

In a video that's now been viewed more than 3 million times, pint-sized scientist Marco Arturo holds up a folder labelled "evidence that vaccines cause autism."

There's just one catch: There isn't any scientific proof that vaccines cause autism.

When Arturo opens the folder to reveal its contents, he pulls out blank page after blank page. Genius.

"There is absolutely no evidence to support the statement that vaccines are linked to autism in any way whatsoever," Arturo says.

He adds that vaccines have saved millions of children from diseases like polio, measles and meningitis.

And to those anti-vaxxers who say they should be free to make choices about their own children, Arturo points out: "It's also everyone else's child you're putting in danger, because you read some forwarded email."

It's true. In 2015, the country's largest measles outbreak in 20 years was attributed to the anti-vaccine movement, according to Forbes. Other recent outbreaks of mumps, whooping cough and chicken pox may also be linked to anti-vaxxers, according to Time.