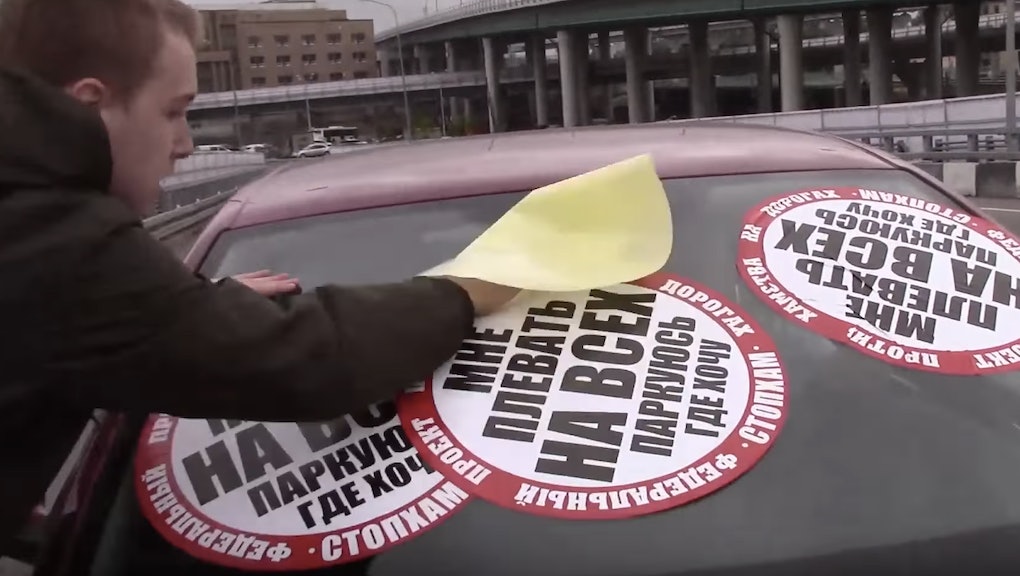 The whole world would seem to be drivable road, as far as Russian motorists are concerned — train tracks, sidewalks, it's all fair game when highways are choked with traffic.

But a group of rule-abiding youths want to change that, using their "Stop a Douchebag" campaign to publicly shame the vehicular menaces of Moscow who use walkways as exit ramps.

Mostly composed of volunteers chagrined at their comrades' driving habits, the group has been operational since 2010. Its mostly millennial members sticker the cars of drivers who, in their judgment, are behaving like douchebags, cutting traffic by off-roading onto sidewalks.

"70% say, 'Oh, sorry,' and drive away," Moscow's Driving on Sidewalks director Maruan Mukhamed told the Daily Beast. "And 30% are belligerent."

Which maybe makes the group's most recent video, posted Monday, abnormal — there were a whole lot of tantrums thrown by disgruntled drivers.

"Unfortunately, you're driving on a sidewalk where people walk, including young children," one of the young men informs an errant motorist. "Could you please back up to avoid any dangerous situations?"

"You want to play tough guy?" he fires back, getting out of his car. "I'm gonna fuck your mouth, scum." Eventually, he submits to a sticker and reverses his car onto the road, but not before letting loose with a stream of profanity. "Fascists! I fucked your mouth!" he shouts from the street. Such an event was not captured on camera.

A bank employee later attempts to run down the volunteers before backing up into a pedestrian.

For a group that purports to be all about safety, though, sticking vision-obstructing circles on drivers' windshields seems at least a little irresponsible.

But then, the people the "social movement" members stop do eventually retreat to the highway, so maybe these are trade-offs that must be made to keep sidewalks safe and douchebag-free.