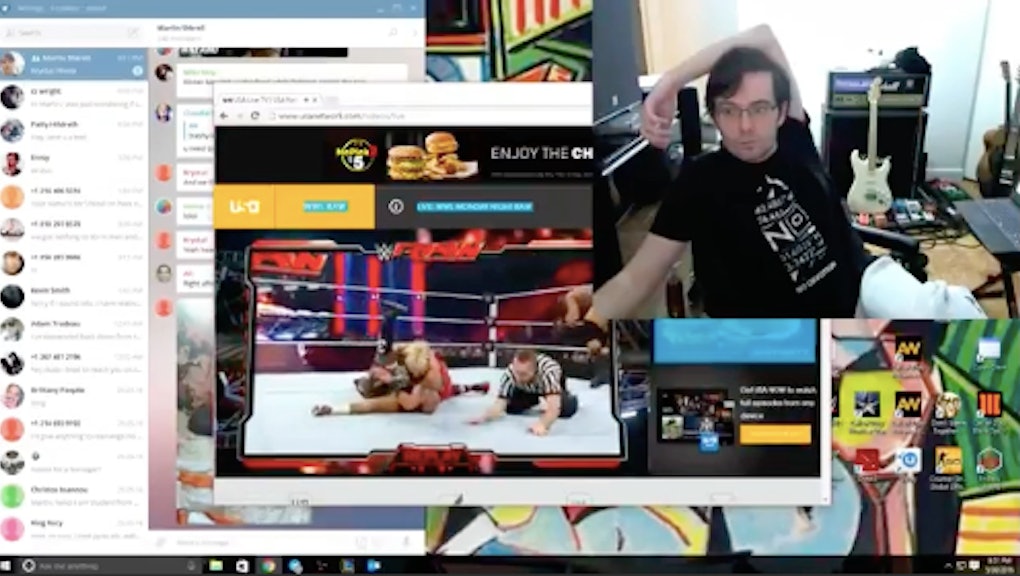 Watching Martin Shkreli salute John Cena is not how I dreamt I would spend my Monday evening.

Pharma bro Martin Shkreli — "the most hated man in America" — gained notoriety for jacking up the price of a lifesaving HIV drug by more than 5,000% and was also arrested for securities fraud. He now spends his time vilifying and name-calling on Twitter. He's called Hillary Clinton Antichrist-like, said feminists are cancer, the media is a "moron" and democracy is toxic. And over Memorial Day weekend he asked the internet to watch a livestream of him doing his thing.

The answer, my friends, is still very unclear.

I entered the livestream on Monday night. There were 69 others watching when I joined, which continually fluctuated by around 10 viewers for the duration of my experience.

I watched Shkreli sit at his desk and watch WWE's "WrestleMania." He also took a few breaks to bring in a loaf of bread and a link of meat (which remained uneaten). He walked around summoning his cat Trashy.

He toggled between WWE and "League of Legends." He trimmed his facial hair with scissors.

He dug for gold.

This isn't Shkreli's first solicitation for the internet to keep him company — he regularly livestreams his "League of Legends" gameplay and opens up Q&As on social video platform Spreecast, asking the "media with any guts" to come ask him questions.

But in this particular instance, the livestream appeared to serve no other purpose than to lure in some eyeballs. Was Milo busy, Shkreli?