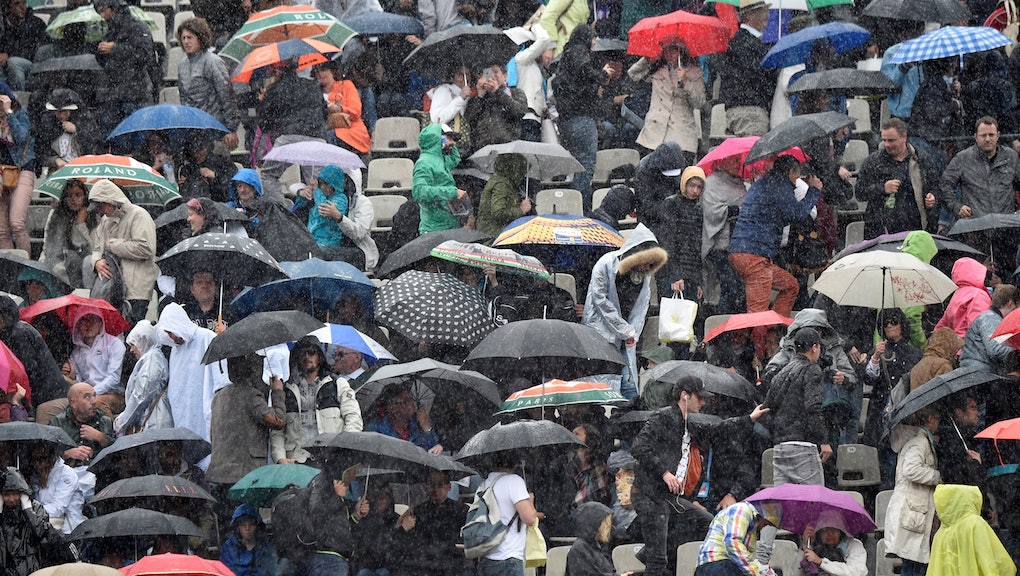 It's 2016. Why Are Umbrellas Still So Terrible?

We keep on getting older, and umbrellas keep looking the damn same.

The same metal pole, getting rustier and rustier. The same canopy of nylon, getting more and more torn. The same handle with the button that doesn't work. And all we wanna do is shield our bodies from the rain.

The umbrellas we grew up with look almost identical to the umbrellas we use to this day, and that's a shame. For an accessory that most humans are forced to use somewhat regularly, the umbrella has seen little innovation. Sure, they're smaller than they've really ever been, but no one has perfected the art of the umbrella.

And the question now is: Why? Why must we suffer like this?

Why must we stress whenever it's going to rain, knowing we'll have to lug around a drippy umbrella? Why must we have anxiety about whether our umbrellas will open and close this time? And, more importantly, how come no one has come along to right these wrongs?

Unlike other weather-related accessories like coats, hats, mittens, even boots, the style of the umbrella has stayed relatively consistent. No one, in the year 2016, yet has a device that can shield them from the rain like an umbrella, and look the least bit interesting. Instead, year after year we are left with the same prototype, which many people are already pretty peeved with, given that umbrellas are cumbersome and annoying to haul around all day.

The umbrella structure dates back to the BC era, with references to parasols (which are essentially umbrellas that aren't waterproof) in Ancient Egypt, India, Greece and Rome. The most ancient interpretation of our modern umbrella is from China, where, in 21 AD, Wang Mang, a Chinese official during the Han Dynasty, used a collapsible umbrella made from paper on the back of his carriage. By the second century, military officer Fu Qian innovated the umbrella so it could have bendable joints, allowing it to retract and extend. While those umbrellas were mostly used to shield against sun, umbrellas were regularly used to shield against rain by 1200.

Almost 1,000 years later, here we are, still using basically the same model, only now (thankfully) not made out of paper, and in a more personal, quaint size we can often pack into our purses.

Several designers have tried to put their own personal, kitchy touch on the umbrella, with Kate Spade making a clear bubble umbrella that reads "Rain check?" and Marc Jacobs making a $42 umbrella with a nautical theme. On a far more luxury level, Neiman Marcus has an Alexander McQueen umbrella for $660, but since umbrellas are still a rather unpleasant experience, very few people would be willing to dish out this amount of cash for a basic-looking black umbrella, that just so happens to have a gold skull at the end.

Even designers, who do indeed have the supplies and finances to reinvent at least part of the umbrella's design, are coming back with nearly identical silhouettes. It just seems like no one's interested in investing in umbrella innovation, and that well may be because everyone refuses to pay more than, say, $15 for an umbrella since all we do is either lose them or gradually loathe them.

On top of the design itself, there are the many pre-existing issues with how an umbrella is mechanically designed. And for that, several different crowd-funded campaigns have attempted to crowdfund in order to change things up. So it seems that rather than designers themselves, it's entrepreneurs or just people who are sick of regular ol' umbrellas, that are taking this design into their own hands.

There was the Cypress Umbrella, which earned more than $94,000, and was built to withstand strong winds, essentially just making the structure and canvas the best and most adaptable it could be.

There was the KAZbrella, which raised more than 265,000 British pounds ($382,421.00 US dollars) and tried to eliminate drippage by folding in on itself from the bottom up, rather than folding the wet part down, which often leaves you totally sucked. The company also tried to strengthen the overall structure, and added a device at the handle that allowed the umbrella to be rung out.

Even if this design does look appealing, all the KAZbrella website says it's "coming soon."

In terms of serious technological advancement and creativity, there was the Air Umbrella, a device (that looks not unalike a "personal massager") would send out enough air so that rain would be repelled, rather magically, away from you. They raised more than $102,000 on Kickstarter, despite only having a few prototypes to show as examples.

However, since the Air Umbrella team was unable to have the umbrellas ready for the donors in December, they've been refunding their donations. So, there's a good chance that this product will never make it to market.

And finally, among these notable mentions in attempts at umbrella innovation, there is oombrella, which is one of the few new umbrellas-in-the-making that is taking advantage of everyone's obsession with technology. The oombrella, which raised more than 60,000 Euros ($67,055 US dollars), is a see-through, holographic umbrella that can connect to your smartphone and alerts you when it's going to rain. The app would also be able to warn you when you've left your umbrella behind.

Since this is the most technologically advanced and practical option out there, of course we have to wait until October to try to get our hands on it.

In the meantime, the umbrella's rotten reputation ticks on. Since none of these umbrellas are currently available on the market, which means we still have months and months (and maybe even years) until innovations like these permeate the mainstream, and we can maybe (one beautiful, rainy day) pick up an oombrella, or a KAZbrella at a Target.

Until then, we are only left to suffer.