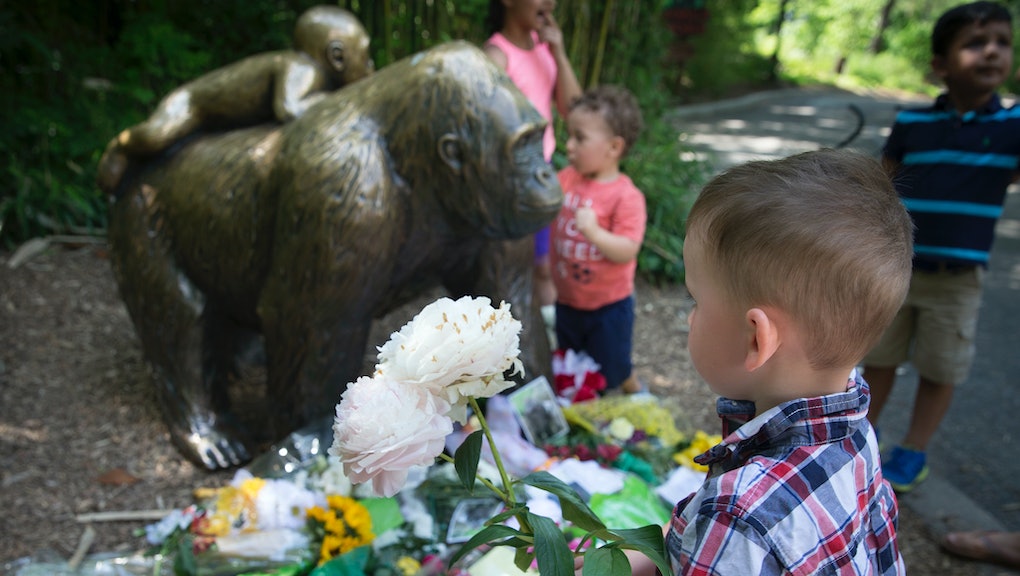 The death of Harambe, a silverback gorilla at the Cincinnati Zoo who was shot and killed after picking up a small boy who fell into his enclosure, has made national headlines since the deadly incident Saturday. Animal rights activists and others have begun offline and online protests against the zoo and the boy's parents, with many claiming that the gorilla was trying to shield the child at the time he was shot.

But while the protesters are right that Harambe's death was an avoidable mistake, their opinions about the gorilla's behavior before his death may be misinformed. Facebook user Amanda O'Donoughue wrote about her experience as a zookeeper and gorilla handler in her twenties and underscored what she said was the truth about male gorilla behavior: that their one job is to "protect the group."

"Now Gorillas are considered 'gentle giants' at least when compared with their more aggressive cousins, the chimpanzee. But a 400-plus-pound male in his prime is as strong as roughly 10 adult humans," O'Donoughue wrote. "What can you bench press? OK, now multiply that number by 10. An adult male silverback gorilla has one job, to protect his group ... Gorillas are considered a Class 1 mammal, the most dangerous class of mammals in the animal kingdom, again, merely due to their size and strength."

According to O'Donoughue, an aggressive gorilla is so dangerous, Association of Zoos and Aquariums-accredited institutions do not allow handlers into the enclosure with the animals.

Harambe was likely not protecting the child, who'd fallen into the enclosure, contrary to what has been claimed on Twitter and by some animal experts, O'Donoughue added.

Instead, O'Donoughue wrote, in the video the gorilla "reaches for the boy's hands and arms, but only to position the child better for his own displaying purposes. Males do very elaborate displays when highly agitated, slamming and dragging things about."

According to CNN, witnesses said while Harambe may initially have meant the boy no harm, as he became agitated, he became rougher and more determined to keep hold of the child.

Zookeepers attempted to call the animals out of the enclosure, but Harambe stayed in the pen alongside the child. Shooting tranquilizers at the gorilla would not have worked, as "[Harambe] would've taken too long to become immobilized, and could have really injured the child in the process as the drugs used may not work quickly enough depending on the stress of the situation and the dose," she added.

The real problem, O'Donoughue concluded, is the zoo's fencing, which is designed to give a better view of the animals' habitats, but is less secure than the caging that preceded it.

Cincinnati Zoo Director Thane Maynard advanced a similar justification for killing the endangered animal in a press conference on Monday.

"The idea of waiting and shooting it with a hypodermic was not a good idea," Maynard told reporters. "That would have definitely created alarm in the male gorilla. When you dart an animal, anesthetic doesn't work in one second, it works over a period of a few minutes to 10 minutes. The risk was due to the power of that animal."

"Western lowland gorillas are critically endangered in the wild, numbering fewer than 175,000, according to the zoo," reported CNN. "An additional 765 gorillas dwell in zoos worldwide. The zoo had hoped Harambe would father more gorillas."

Amanda O'Donoughue did not immediately return a request for comment from Mic.