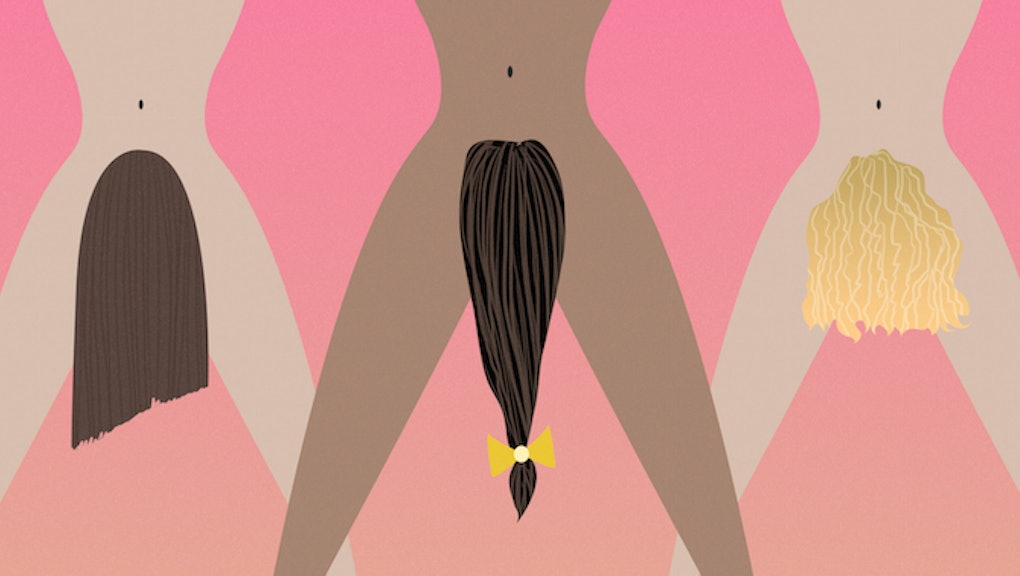 The Peculiar, Hairy History of Hollywood's Beloved Pubic Wig — aka the Merkin

Although Hollywood is known for sex scenes in which two hairless bodies roll around with one another on a set of silk sheets, the merkin — or pubic wig — lives on.

The merkin has been there for Hollywood when it needs it most. There it was, prominently full on Kate Winslet in The Reader. There it was, full and proud on basically every woman engaging in a full-frontal scene on the HBO series Boardwalk Empire. There it was, on Rooney Mara in Girl With the Dragon Tattoo, and peeking through the pubic areas of Anne Hathaway and Jake Gyllenhaal during the questionable film Love and Other Drugs. And there it was, on Olivia Wilde's character in the nearly-forgotten HBO series Vinyl.

In Wilde's case, she was more bashful of the pubic wig, telling Seth Meyers: "I was horrified background actors might think this was my real body hair. So I was walking around like 'WHOA. Check this FAKE merkin out, everyone. It's not real!'"

But really, Wilde needn't be so ashamed: As Mic has reported, the conversation around what to do with your own pubic hair is louder than ever before, with public discourse and evidence on Instagram that yes, believe it or not, not all women are hairless aliens.

And while we're currently having this conversation, the merkin has increasingly lent its power to wear a toupee over genitalia to actresses and actors in their times of need — be it lack of pubic hair or uneasiness in revealing their own — and has in turn become a signal of how what women choose to do with their pubic hair has changed over the past 20 years.

But don't think that this is a modern device. The merkin is far more than a Hollywood secret; it's a hairpiece with a 400-year history.

Read more: Women Are Talking About Their Pubic Hair -- And That's a Good Thing

A very hairy (and gross) history: It all goes back to the medieval era, when bathing and shaving and general hygiene was not much of a thing. Sexually transmitted diseases ran rampant because of it, leading to the creation of the merkin in 1450 as a way to cover a woman's "lower parts" that were shaved or covered in warts, according to the Guardian.

It was widely embraced by women dealing with pubic lice who decided to shave their hair and wear the wig instead, which they could buy from wigmakers. Pubic hair was linked to good health at the time, as STDs often made pubic hair fall out. In order to look healthy, they'd glue on a piece made from hair sewn into lace.

Given how necessary pubic hair was to a woman's public image, prostitutes also found a very unique (and gross) reason to wear the merkin. As the Guardian elegantly put it, "They knew it was no work, no pay, and didn't want to scare the customers off with their syphilitic pustules and gonorrheal warts. So the merkin was used as a prosthesis to cover up a litany of horrors."

So, have an unsightly growth on your vulva? Put a wig on it!

For the next few hundred years, prostitutes also enjoyed merkins because of their ability to shock their customers, with natural blondes donning, say, a black merkin for an element of surprise during their seduction.

How the merkin got its name is a little less detailed, with some sources citing that it derives from malkin, a Scottish word used from the 1600s to the 1800s for a poorly-dressed person.

Given that poor women would have been more apt to wear merkins in order to hide diseases, the term's etymology does make sense.

By contrast, pubic hair wigs were sometimes used by wealthy citizens in ancient Egypt. Cleopatra was known for her long, shiny and lush hair down there, and upper-class people wanted to emulate her. Poor people, on the other hand, often shaved or waxed to rid of pubic lice.

"In ancient Egypt, most citizens — noble or otherwise — were required to shave their pubic and body hair to rid themselves of lice," wig stylist Randy Sayer told Grantland. "Noble and wealthy people were known to wear wigs ... and it is thought that a type of merkin was fashionable; it could be worn to show that they were rich enough to maintain their pubic hair."

For the past 100 years, as hygiene practices improved and less pubic hair succumbed to STDs, merkins were mostly used as props in performances. But over the past two decades, they have seen a resurgence on film thanks to loosening censorship laws, with period movies and TV shows embracing the idea that a woman in the 1950s probably wouldn't have shaved down there.

The merkin's comeback has shown how women's treatment of their pubic hair has changed. Given the unlikelihood that every actresses is naturally wearing their full bush, a merkin can be used when they get hired for a nude scene.

One of the more notable times it wasn't was during Sharon Stone's leg-uncrossing scene in Basic Instinct, which caused a whole lot of controversy at the time.

"Though the completely bare Brazilian wax was brought stateside by the J. Sister Salon in 1987, it didn't enter the cultural consciousness until 1999, when stars like Gwyneth Paltrow began claiming that the look was life-changing," writes Bustle.

While grooming one's pubic hair is a personal decision, having no hair down there became a widely-discussed norm for young women. Think Carrie Bradshaw getting a bikini wax for her boyfriend in Sex and the City. Then, as young women were cast in period pieces like The Reader or Vinyl, they had to wear a merkin.

"When viewers would see her naked body, she needed to have an appropriate era bush, and they simply couldn't find an actress with a full bush," Amanda Miller, a wigmaker who designed a merkin for an actress on Boardwalk Empire, told Refinery29's Lauren Le Vin "It's just gone out of fashion." According to Emmy-winning makeup artist Nicki Ledermann: "For some actors, a merkin is a safety blanket."

But that doesn't mean merkins can't be trendy for people who aren't actors. American Apparel, a retailer wrought with their own scandals, caused a stir in 2014 when it rolled out a window display with mannequins sporting full bush merkins.

Merkins are still available for purchase, with World of Wigs selling a pubic hair piece for $44.95. Although the Guardian points out that they are now more associated with fetishists, that doesn't discredit their important existence as a product. On social media, more young women are voicing their support of doing whatever you want with your pubic hair. Be it a merkin or the real deal, it doesn't really matter either way.

Although it is just a flimsy few inches of hair, the merkin is intrinsically linked to not only our culture and evolving sexualities, but our fashion as well. As long as there are vaginas, there will be merkins.