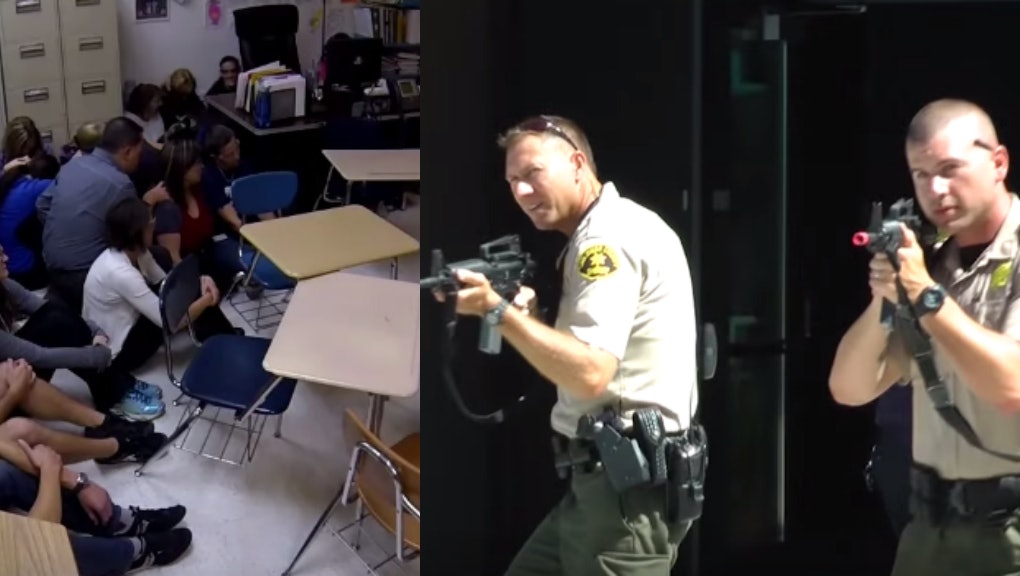 Students line the hallways soaked in fake blood as police scream, "I'm going to kill everybody! Nobody's getting out of here!" Teachers hide with their students behind displaced desks as they stare at the door in silence, waiting for a gunman to enter. It all happens fast, and at times the students aren't even told what's happening other than a routine lockdown.

The Associated Press recently reported two-thirds of schools in the United States now practice active-shooter drills, attempting to educate teachers and students on what to do if an armed assailant enters their schools. It's essentially the 2016 version of the 1950s "duck and cover" drills — though the threat of a shooting in the United States is far more realistic today than an atom bomb.

So, to make it realistic, some districts ask for students to volunteer as dead bodies. Various law enforcement groups participate, bringing real guns into the schools and firing fake rounds to simulate the noise of bullets ringing through the halls.

Government Accountability Office investigators "said one district noted 'the difficulty of striking a balance between providing knowledge and inciting fear, particularly at schools with younger children,'" the Associated Press reported.

In a country that saw 25 elementary and secondary school shootings between 2000 and 2013, according to the AP, there's no denying schools face a growing threat of violence on their campuses. However, as a preschool teacher noted in an essay for the Washington Post, "Instead of controlling guns and inconveniencing those who would use them, we are rounding up and silencing a generation of schoolchildren, and terrifying those who care for them."

"Our principal had announced we were going to have a lockdown," Lauren Marionneaux, a student at Jewett Middle Academy in Florida, told ABC News. "We actually thought someone was going to come in here and kill us."