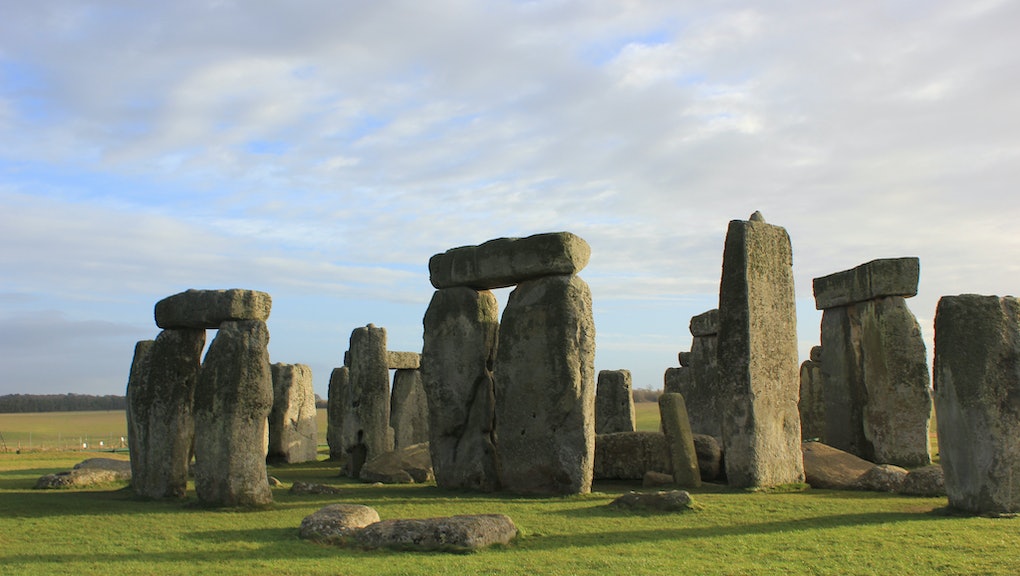 Scientists Believe This Is How Stonehenge Was Built, and It's Way Easier Than You'd Think

For quite some time now, the massive English Neolithic period monument Stonehenge has baffled scientists and visitors alike. After all, dragging those probably back-breaking stones that weighed two tons each for 140 miles from Preseli hills in Pembrokeshire, Wales, must've been a grueling task fit for a village, right? (While the stones from Preseli weighed two tons, the average Stonehenge stone weighed 25 tons.)

Maybe not, University College London archaeologists found in a recent experiment. In the experiment, participants replicated the building of Stonehenge, located near Salisbury, England, with the technique of pulling stones on a wooden sleigh down a track.

Turns out a one-ton stone only needed a team of 10 people to move at a speed of "more than one mile per hour," which leads scientists to believe that a team of 20 people could've helped assemble each Stonehenge stone.

Researcher Barney Harris had predicted that one of the one-ton stones would need 15 people to move it and up to 50 to actually lift it up.

However, the conditions of the experiment were a little different than what would've been going on during the actual Stonehenge-building. For instance, the experiment used flat terrain and stones half the size of some of the blocks in Stonehenge.

Built about 5,000 years ago, Stonehenge was likely a sacred place for burials, according to History. It's made up of two rings: an outer ring made of sarsen sandstone and an inner ring made of smaller bluestones.

But the sleighs used by Harris and his team have been around since ancient China, and were probably used to move around the 125 ton stones used in the Forbidden City. They're so effective that they're still used to build structures in India today.

Read more: Scientists Have Made a Mindblowing Discovery at Stonehenge