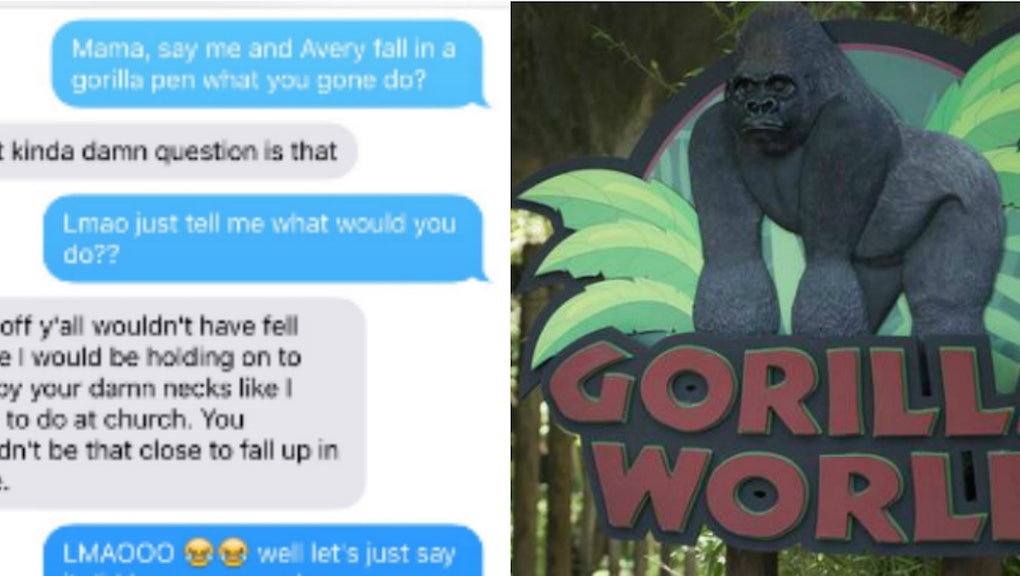 By now you have probably heard about the recent tragedy at the Cincinnati Zoo, in which a gorilla named Harambe was shot and killed to protect a child who somehow wandered into his enclosure.

Thankfully, the child emerged safely, but Harambe's death was "a huge loss for the Zoo family and the gorilla population worldwide," the zoo's director said in a solemn statement. It also prompted outrage among members of the animal rights community. While many have argued that Harambe was actually trying to protect the child at the time, others have defended the zoo's decision to shoot the gorilla.

Now that the incident has gone massively viral, it seems like everyone and their mother has an opinion about the Cincinnati Zoo controversy — including this actual mother. In what is perhaps the one good thing to come out of the whole controversy, Twitter user @SHARLO_XO texted her mom asking what she would have done had her children fallen into the enclosure, leading to this response:

Honestly, this mom is just keeping it real. All things considered, holding onto your child by the neck to make sure that he or she doesn't fall into an enclosure with a 400-pound silverback Western lowland gorilla is a sensible idea. And if that doesn't work and the child does somehow fall in, "Well then, shit, y'all [are] the gorilla's kids now."

Sassy and humorous Twitter moms are great! See the below tweets for even more of them: