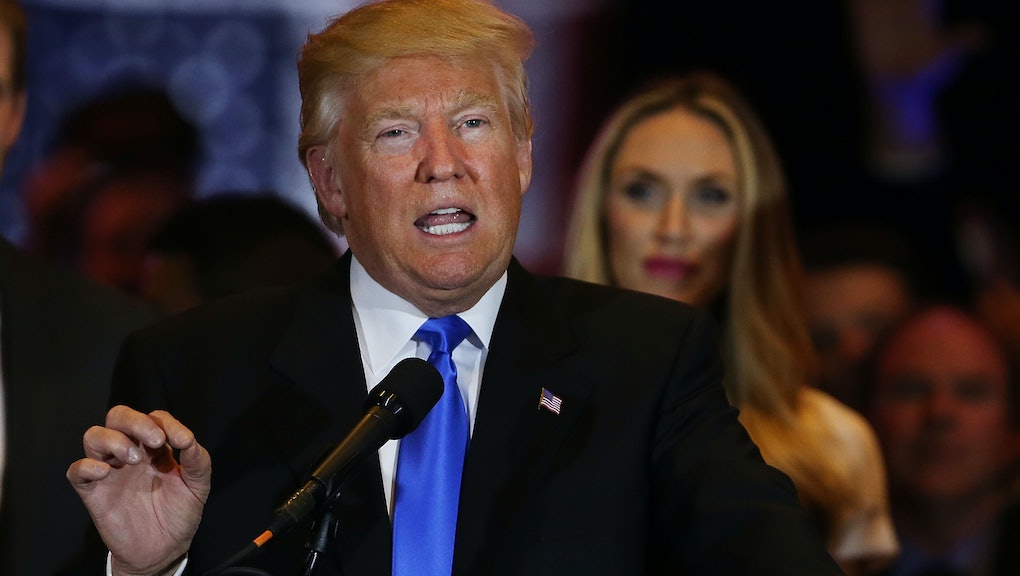 Meet the Gay Voters Backing Donald Trump, "The Most Pro-Gay Republican Nominee Ever"

As he vaulted past his rivals to clinch the Republican presidential nomination, Donald Trump was fueled by disproportionate support among voters who were angry, white, male and working class — hardly the demographic one is likely to find at the Folsom Street Fair or snatching up tickets to see Lady Gaga.

But among the Trump Train's passengers is a fiercely committed corps of gay supporters, enamored of the brash billionaire's anti-establishment message and unimpressed by likely Democratic nominee Hillary Clinton, who remains the heavy favorite among LGBTQ voters.

Read more: What Explains the LGBT Divide Between Hillary Clinton and Bernie Sanders

"Donald Trump is the most pro-gay Republican nominee ever," Chris Barron, the former national political director of the Log Cabin Republicans and a co-founder of the now-defunct group GOProud, said in an interview.

That may seem difficult to square with Trump's support from evangelical leaders like Jerry Falwell Jr., his avowed opposition to same-sex marriage and his promise to appoint Supreme Court justices in the mold of the late archconservative Antonin Scalia. But while early polling shows Clinton a lock to win gay voters, the billionaire's boosters in the community cheer his history of supporting gay rights, his business acumen and his brash, thoroughly unapologetic persona.

The background: Before he was palling around with Falwell and Pat Robertson, Trump was attending gay entertainer Elton John's wedding ("If two people dig each other, they dig each other," the plainspoken businessman said at the time), supporting AIDS charities and flying an openly gay Trump Organization executive and his partner on his jet for weekend trips.

Trump is also on the record in support of adding sexual orientation as a protected class under the Civil Rights Act of 1964 and in opposition to North Carolina's anti-LGBTQ law and the military's erstwhile "Don't Ask, Don't Tell" policy. In February, Trump predicted that the country would see further "forward motion" on LGBTQ rights under his presidency.

"Donald Trump was pro-gay long before it was politically trendy — unlike Hillary Clinton," Barron said. Though Clinton, unlike Trump, backs same-sex marriage rights, she did not do so until 2013, about two years after that position started garnering majority support in public opinion polls.

"We've won the day." But for Trump's gay supporters, his positions on traditional LGBTQ issues are of tertiary interest at best.

"Think of where most immigrants come from: war-torn, socially conservative countries in the Middle East, or violent South and Central American backwaters," Yiannopoulos said in an email. "Neither environment breeds a culture that's particularly interested in or friendly to gay rights. Much as the left likes to bash it, it's western culture that's done the most for queers."

Barron — who harshly criticized Trump early in the primary season but has since come around to supporting his bid — said that the presumptive nominee's "live-and-let-live" ethos and relative moderation on social issues would "free up" gay voters to look beyond topics like same-sex marriage and employment non-discrimination.

"This is an issue that we've won the day on," Barron said of same-sex marriage, adding that the GOP must "acknowledge LGBT people as an important part of our landscape" to make inroads with gay voters and social moderates. But gays, Barron said, should "look at the totality of issues that impact them," citing jobs, the economy, foreign policy and terrorism.

Would that broader focus redound to the GOP's benefit? Many LGBTQ Americans confront a host of economic challenges — including workplace discrimination and disproportionate rates of homelessness — but compared to heterosexuals, gays earn higher median incomes, enjoy higher personal savings and are less likely to be unemployed, according to a 2012 study by Prudential.

More affluent voters are more likely to vote Republican, and should Trump lead a deescalation of the right's culture war on LGBTQ issues, many well-to-do gays — to say nothing of non-gays turned off by the party's social conservatism — may give the GOP a second look.

Shot, meet chaser: Jimmy LaSalvia, who co-founded GOProud with Barron but bolted from the GOP in 2014, citing its persistent "tolerance of bigotry," isn't convinced.

Even if Trump dials back the party's hardline stance on LGBTQ issues, LaSalvia said in a recent interview, gays will recoil from the candidate's rhetoric targeting immigrants, women and Muslims.

"Gay people have been used as political pawns our entire lives. It's personal to us and everyone who's ever been marginalized for political gain," LaSalvia, who endorsed Clinton in December, said.

But Barron is unswayed by such appeals.

"It's what the left is now relying on to try to keep LGBT voters on the Democratic plantation," he said. "Where were all the Muslim groups when it came to the fight for marriage equality? Forgive me if I'm not totally and completely feeling the kinship there."

Donald Trump, gay icon? There is a natural kinship, Yiannopoulos contended, between gays and the onetime Manhattan playboy, to whom he regularly refers to as "Daddy" in tweets cheering Trump's campaign.

"The man built a gold-plated tower with his name on it!" Yiannopoulos said, referring to Trump's home base on Fifth Avenue. "Gay men have a deep, if sometimes brash, sense of the aesthetic, and Trump's is hard to ignore. It's flashy, it's in-your-face, it's fabulous."

"Then there's Trump himself," Yiannopoulos added. "Raw, masculine energy. He's just so much more exciting than normal presidential candidates with their drab expressions and teleprompter speeches."

It's difficult to evade a sense of campiness in the Trump shtick: The remarks about his opponents' (male and female) physical appearances, the flashiness of his campaign rallies (complete with a playlist featuring the Broadway classic "Music of the Night," from Phantom of the Opera) and the carefully-cultivated histrionics ("I do whine because I want to win and I'm not happy about not winning and I am a whiner and I keep whining and whining until I win.")

But Trump may nevertheless confront significant hurdles in winning over LGBTQ voters. A May poll conducted by the firm Whitman Insight Strategies found Trump winning only 16% of the LGBTQ vote to Clinton's 84%. That was worse than the 76% to 22% difference between President Barack Obama and Mitt Romney in 2012, although the survey featured a small sample of only 338 likely voters nationwide.

"He'll definitely do better," Yiannopoulos predicted. "While I doubt many progressive, Democrat-supporting gays will switch over, he'll bring in a huge number who have never voted before in their lives. He's just that compelling."