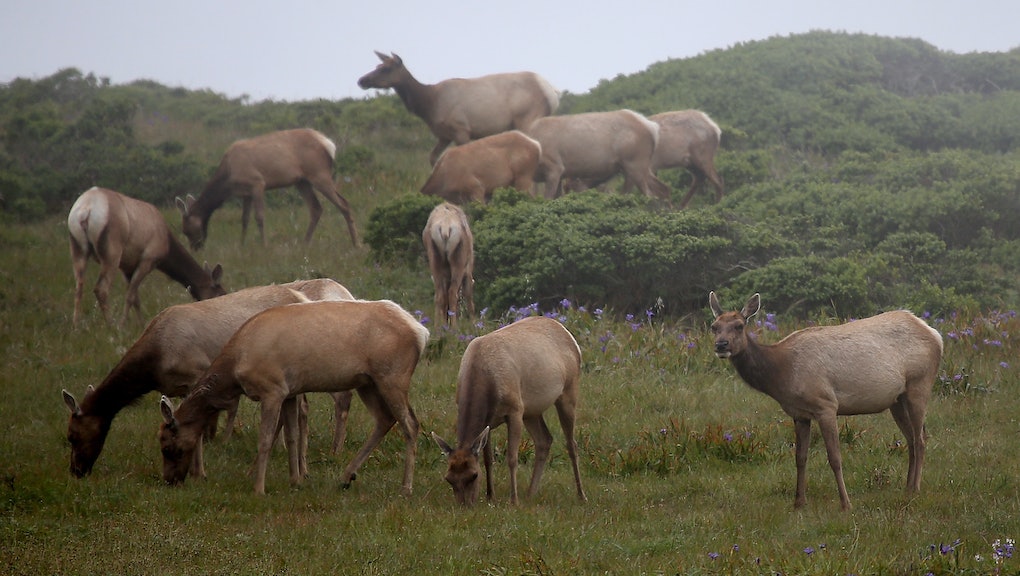 Tourists at Yellowstone National Park have been a real pain lately: trampling hot springs, stealing baby bison, generally disregarding the rules that exist for a reason. One of those reasons is to keep the animals from attacking humans, which is exactly what happened to one woman who, on Friday, ignored the park's stipulation that visiting humans maintain a 25-yard distance from wildlife and approached an elk with the apparent intention of taking a selfie with it, as ABC News reported.

Probably displeased at the prospect of being photographed at close range, the elk swiftly charged the woman, who appeared to fall either from surprise or because she was hit by the elk (it's unclear from the video which was the case).

According to CNN, "veteran nature guide" Jody Tibbitts saw the whole thing. It was in fact his videographer, Manny Perez, who caught the moment on video. For posterity.

As Tibbitts explained, this kind of careless tourist behavior seems to correlate with the rise of the smartphone. "Prior to having high definition cameras in our pockets, people seemed more courteous to animals," he told CNN. "It seems like people are being more brave and taking more chances and not thinking about the consequences."

That "bravery" has consequences for the animals. The aforementioned baby bison had to be put down after tourists attempted to rescue it from its natural habitat. As National Park Service spokesman Jeffrey Olson told ABC, it's this urge to get up close and personal with animals in pursuit of that like-getting selfie that's increasingly prompting people to inadvertently "endanger themselves and endanger wildlife."

"As entertaining as the video is, it is more of an educational video," Tibbitts told ABC News. "Even the most gentle- [and] meek-looking animals are going to be dangerous." The elk, Tibbitts explained, had recently given birth to a calf. Per a Facebook post from Yellowstone on Friday evening, calving season is underway. Tourists are urged to proceed with caution around the protective animals, which obviously includes observing the park's rules about keeping a safe distance.

And also using common sense when communing with nature.