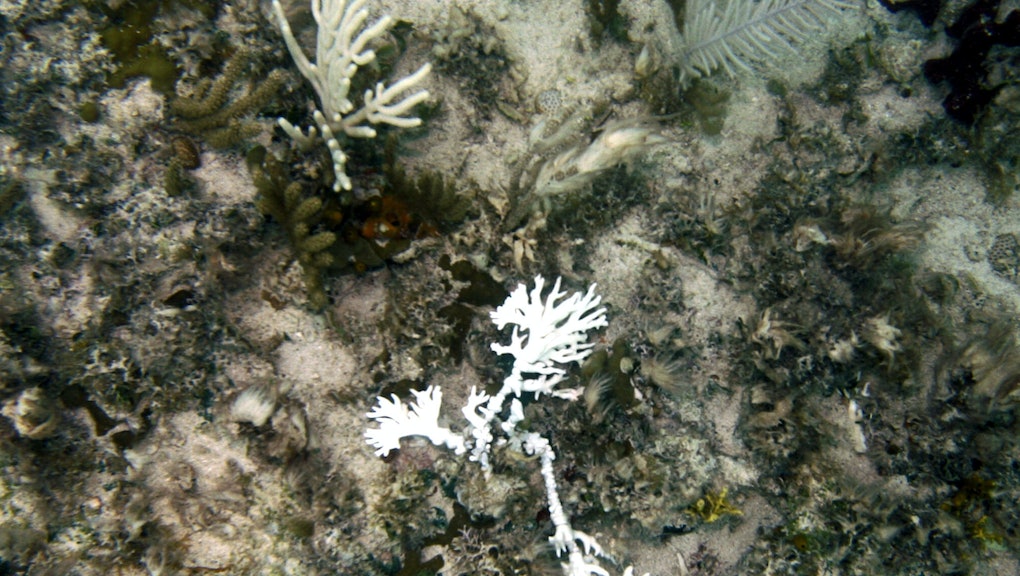 Rising Ocean Temperatures Are Creating a "Coral Graveyard" Around the World

Coral reefs are dying around the world due to rising ocean temperatures caused by global climate change and this year's intense El Niño.

During a recent expedition to Jarvis Island, located about 1,500 miles south of Hawaii, scientists found enormous amounts of coral had been destroyed as a result of bleaching, Mashable reported. The process, which is deadly to the reefs, occurs when ocean temperatures rise for prolonged periods of time, forcing the coral reefs to eject the nutrient-providing algae that gives them their vibrant color.

The reefs "looked more like a coral graveyard," Bernardo Vargas-Angel, a scientist affiliated with the expedition, told the website. He went on to note that "just a year before this was a vibrant and colorful coral reef."

With its rich coral reefs, Jarvis Island has historically been home to some of the richest and most diverse biomass in the world. Healthy coral life is a critical underpinning for many other forms of life that live around the reef.

Coral bleaching is not limited to the waters surrounding Jarvis Island. Off the coast of Australia, the Great Barrier Reef — arguably the world's most famous coral formation — has suffered extensive and possibly permanent damage from the same phenomenon. Experts now estimate that up to 35% of the reef's northern and central regions are dead or dying.

"This year is the third time in 18 years that the Great Barrier Reef has experienced mass bleaching due to global warming, and the current event is much more extreme than we've measured before," Terry Hughes, director of the Australian Research Council Centre of Excellence for Coral Reef Studies said earlier this year, Vox reported.

It remains unclear if the damage can ever be reversed.