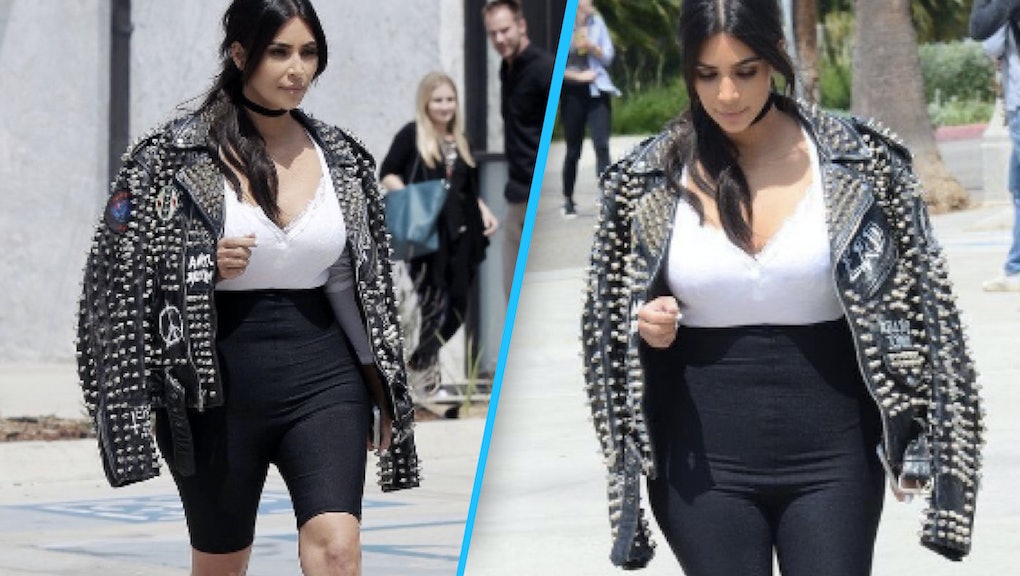 On Tuesday, outside the Snapchat headquarters in Venice, California, Kim Kardashian West made news not because she came up with some new genius filter that could give you a perennial duckface or because of another truly creepy faceswap, but because of what she was wearing on her lower half.

On her way to this mysterious meeting, she paired an $11,000 studded leather jacket, an $8,000 pair of red high heels and a black choker with a pair of black, elastic shorts, akin to the ones your mother probably wore while doing lunges to a Jane Fonda workout VHS in 1994.

Rather immediately, as the images of this mismatched outfit hit the web, Twitter erupted:

According to Elle, Glamour and People, the shorts looked more like biker shorts, which (especially with the addition of a choker) means that Kardashian West is effectively trying to bring every single '90s trend back to life. Are we mad? Not really.

That's because there is nothing technically wrong with these shorts. They do, after all, do the one critical thing that all shorts should do: Cover whatever needs to be covered so the wearer does not get arrested for indecent exposure.

What's the real difference between these and, say, leggings? Both are used during workouts, and both are technically pants, or half-pants, in Kardashian West's case. As a curvy woman, it's difficult to find bottoms of any kind with enough stretch anyway, so Kardashian West is just cutting out the middleman here, and wearing shorts that are entirely stretchy.

Because of their stretch, many people are actually claiming that her shorts could technically be Spanx.

And if that's the case, then let this go down as one of the most righteous feminist art performances of our time.

Under plenty of red carpet gowns, Kardashian West has sucked herself into a pair of Spanx, because she likes the way they hold her in. So with her just wearing them and nothing else at all, she's merely letting down this facade and (hypothetically) saying, "I'm wearing Spanx, here me roar." That is, if she's wearing Spanx at all.

Kim Kardashian West may really be our generation's Jenny Holzer. You heard it here first, folks.

Kim Kardashian West may really be our generation's Jenny Holzer.

But anyway, although they may not look appealing or attractive to you, the pants or Spanx or whatever they are are fine. They are shorts. They conform to Kardashian West's curves. They allow her the freedom to move. They allow her the opportunity to go from a workout to a business meeting with just the addition of a jacket and a pair of high heels.