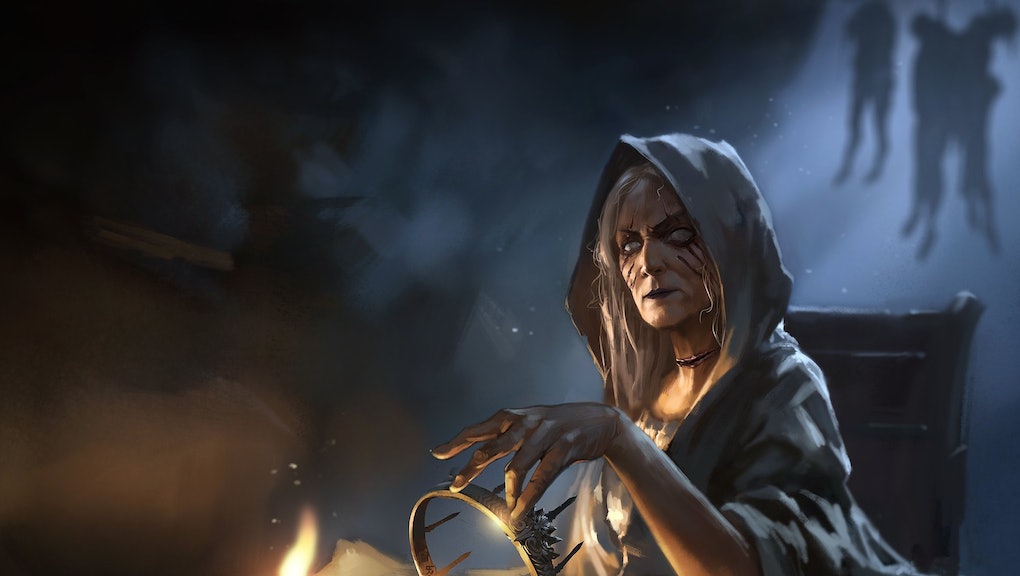 (Editor's note: Spoilers ahead for Game of Thrones and A Song of Ice and Fire novels).

The last episode of Game of Thrones was an unexpectedly welcome one for House Stark loyalists. Instead of losing a Stark member in tragic circumstances like we normally do, fans actually gained a member in the return of Benjen Stark — albeit in essentially hybrid human-wight form.

Read more: This 'Game of Thrones' Fan Theory About Bran Stark Could Be a Series Game Changer

Now, another theory suggests that Benjen won't be the only Stark returning this year. The show could be gearing up to reintroduce Lady Stoneheart, aka Catelyn Stark, as soon as the next episode. But how likely is it?

To quickly recap: The last time we see Catelyn is during the Red Wedding, as she has her throat slit after witnessing the death of her son, Robb, and his pregnant wife Talisa. It's a heartbreaking scene in both the show and George R.R. Martin's A Song of Ice and Fire novels, though she returns in the books as Lady Stoneheart, a zombified, vengeful version of the character.

Lady Stoneheart is brought back to life by Thoros of Myr of the Brotherhood Without Banners. We've already seen Thoros can revive people with the help of the Lord of Light — as evidenced by Beric Dondarrion's on-screen resurrection after being killed by the Hound. In the novels, Beric gives his life in order for Catelyn to assume her role. Essentially, that role is to make House Frey's life a living hell, capturing members of the house in the Riverlands and hanging them.

The show's narrative has shied away from the Riverlands ever since the events of the Red Wedding, but the area was reintroduced last episode with Walder Frey, whose children have lost Riverrun to Catelyn's uncle, Brynden Tully, "the Blackfish." The key here is that one of Walder's sons also makes reference to the Brotherhood Without Banners having rallied the common folk, and are raiding their supplies.

The brotherhood hasn't been seen since season three as well, but if they were to follow the book's trajectory, these attacks would be led by Lady Stoneheart. Moreover, her storyline would coincide with both Jaime Lannister and Brienne of Tarth being sent to Riverrun on behalf of King Tommen and Sansa Stark, respectively. When meeting Brienne in the books, she orders her to kill Jaime to prove her loyalty to the Starks.

It might not transpire in a similar light in the show, given how far back in the novel's timeline Lady Stoneheart was introduced, but it's clear from the episode preview that there will be some conflict in the Riverlands. Perhaps, based on the dour expression on this Frey members' face, the reveal of a slain member of the Red Wedding seeking their revenge. Resurrection and Stark vengeance are clearly themes in Game of Thrones — Jon Snow being the byproduct of earlier hints, like Beric — and Lady Stoneheart embodies both of these traits.

Conversely, the conflict in the Riverlands could just stick to Jaime, Brienne, the Freys and the Blackfish — that's already a lot of players. Plus, Martin and members of HBO's production have denied that Lady Stoneheart, and subsequently actress Michelle Fairley, would return. The fact that it hasn't happened yet, three seasons after the Red Wedding, is more indicative of the show dropping the storyline, as they don't strictly follow the wide-ranging books' narrative.

Meanwhile, Sansa Stark's storyline has assumed a more humane iteration of such Stark vengeance, given that she's the one who experiences Ramsay Bolton's torture and sexual violence (it is Jeyne Poole in the books, who doesn't feature on the show). Sansa is now the rallying cry for the North to remember, making Lady Stoneheart not absolutely necessary.

We'll have to wait and see whether the show decides to bring back Lady Stoneheart. However, we know how the fanbase feels: It's a resounding yes.