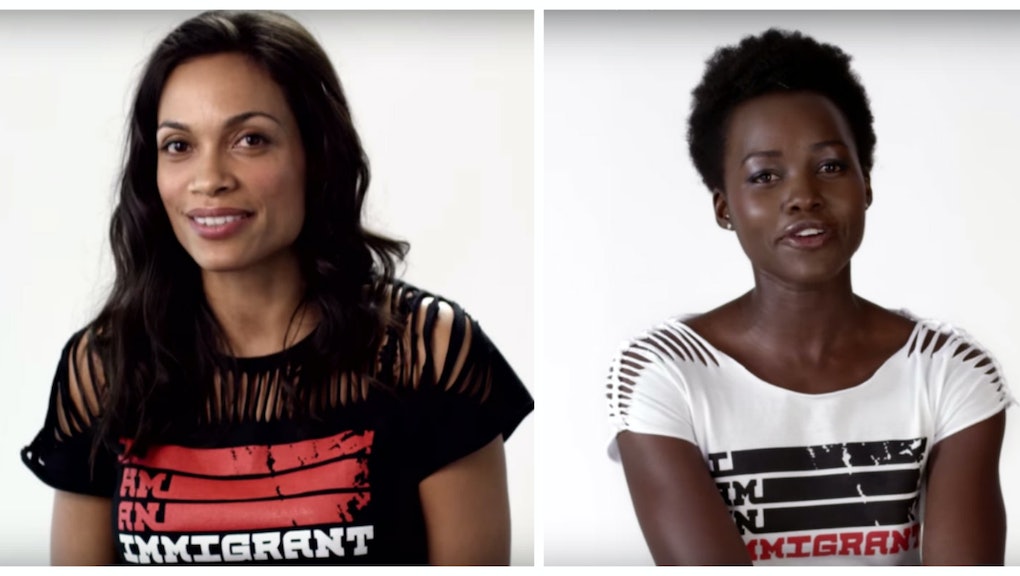 Lupita Nyong'o, Rosario Dawson and Others Want You to Remember Something About Immigrants

Unless you're Native American, any citizen of the United States falls into one of two categories: immigrant or descendant of an immigrant.

A new celebrity-studded campaign from Welcome.us, the nonprofit behind the annual Immigrant Heritage Month in June, shows celebrities like Oscar-winner Lupita Nyong'o and Rosario Dawson discussing their immigrant stories. Nyong'o immigrated to the U.S. from Kenya, while Rosario Dawson is of descendant of immigrants from Puerto Rico and Cuba.

"I think that what's so wonderful about America is that it's a society of immigrants," Nyong'o said in a video accompanying the June 1 launch of Welcome.us's #IAmAnImmigrant campaign.

"[People say,] 'Well my family came over here on the Mayflower,' and I'm like, 'Exactly! Hello, immigrant,'" Rosario Dawson said.

In a statement to Mic, Alida Garcia, a member of Immigrant Heritage Month partner FWD.us, said the campaign provides a space for people to speak about the strength and beauty of America's diversity.

"Whether you're a famous celebrity on television or an undocumented immigrant fighting to make your American dream a reality ... your beauty and strength shines through and contributes to our collective American story," Garcia told Mic.

Garcia said the campaign is also intended to raise awareness about the upcoming Supreme Court's decision in US v. Texas — a challenge to the constitutionality of President Obama's Deferred Actions for Parents of Americans program, which allows parents of U.S. citizens to obtain work permits in the United States.

Some people have already begun to participate in the hashtag campaign on Twitter, some using the campaign's "I Am an Immigrant" photo filter, which allows people to put the phrase "I Am an Immigrant" over an uploaded photo and tweet it out to their followers.