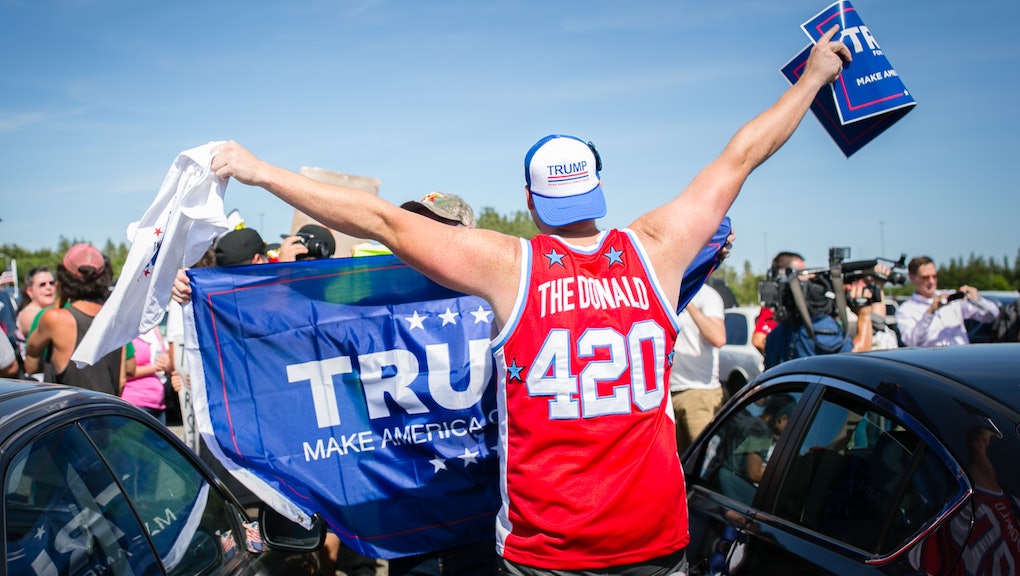 How Young Republicans Are Dealing With the Age of Donald Trump

At least before the Rolling Stones asked him to knock it off, Donald Trump's standard campaign rally playlist included the band's classic ballad, "You Can't Always Get What You Want."

For young Republicans who backed other candidates mowed down in the Republican presidential primaries by the Trump Train, the song turned out to be all too ironic.

The candidates they preferred are gone. The general election is looming.

Where do they go from here?

Ryan Malouff, 21, who expressed interest in Jeb Bush and Marco Rubio during the GOP primary while still a student at the Citadel in South Carolina, said he's still getting his head around Trump's impending nomination.

Read more: Meet the 20-Year-Old Mastermind Behind Students For Trump

"I knew that it was a possibility that [Trump] could gain the nomination, but needless to say, it is quite surreal. ... Unfortunately, he might be my only choice," Malouff, now a second lieutenant in the Army Medical Services Corps, said in an interview.

"Bernie Sanders is not looking to be fiscally conservative, so I don't think I could vote for him. Hillary Clinton [has] lost my trust and support after the events in Benghazi," he said.

Malouff said he's toyed with the idea of getting around the Trump problem by supporting someone outside the GOP entirely: "I would consider voting for [Libertarian] Gary Johnson, but he [won't] have the support to win it all."

As to how this all happened, he said, "The only way I can truly explain [it] is the fact that the people are angry at the system — and needless to say, Mr. Trump has changed or maybe broken that system."

Work to do: Trump managed to put away a herd of competitors with a formula that drew on his worldwide celebrity, bellicose talk about fighting terrorism and illegal immigration, unapologetic populism and a deep understanding of just how fed up Americans are with Washington.

But that was in a primary cycle that often limited participation to registered party members — a dynamic that's a considerable hurdle for many young voters.

Trump has undoubtedly captured the minds of young people with his rhetoric and reality show persona, but the battle isn't over. The main-event fight will now shift to courting independent and undecided voters, and research suggests Trump's got work to do with millennials — even within his own party.

The Pew Research Center noted in a Thursday report that youthful GOP voters aren't as cozy with him as are their older counterparts.

Trump can certainly be expected to capture base Republican voters in a fight against likely Democratic nominee Clinton.

That should become more true as more marquee Republicans like House Speaker Paul Ryan say they'll unite behind Trump — but young conservatives are pledging their allegiance to him through gritted teeth.

Turning point: Take as an example Gina Jochimsen, a 20-year-old University of Iowa student who threw herself into campaigning for Rubio, only to see her hopes dashed when the senator canned his bid after a stinging defeat to Trump in his home state of Florida.

"As hard as it has been to accept it, I've now boarded the Trump Train," said Jochimsen, a conservative activist with Turning Point USA, a student-focused nonprofit that promotes limited government.

The decision, Jochimsen said, didn't come without an internal struggle... and a psychological flirtation with the #NeverTrump movement.

"I did originally think that was right idea and agreed with the fact that Donald Trump was not fit or principled enough to be [president]," she said, but as it became clearer that the ultimate November choice is likely to be between Trump and Clinton, Jochimsen said she had to stick with the GOP's pick.

"I know that his conservative record isn't the purest," she said of Trump, "but if I can prevent Hillary Clinton, who allowed four Americans to die in Benghazi and then lied to the families of those Americans, [from becoming president], I will absolutely do so."

There is a degree of mental bargaining here: As Jochimsen justifies it, "At the end of the day, it won't be a vote for Trump — it will be a vote for whoever he decides to choose for his VP."

Specifically, Jochimsen would like to see Trump put a woman on the ticket. She personally favors South Carolina Gov. Nikki Haley, although given Haley's endorsement of Rubio in the primary and very publicly stated distaste for the Trump brand of politics, Jochimsen concedes that's a long shot.

No way: After investing time, energy and deep belief in other vanquished candidates, some young Republicans simply do not accept that the Donald deserves to be commander-in-chief and will not support him for any reason.

One of these is Melissa Jane Kronfeld, a New Yorker who served as part of Ted Cruz's Jewish leadership coalition.

"I believe strongly in the civic duty to vote. Billions of people around the world don't ever get the chance to do so, and I wouldn't sacrifice my vote for anything," the 33-year-old activist and consultant said.

While she wouldn't reveal whom she'll support in November, "there is absolutely nothing that Donald Trump could ever do to get my vote," Kronfeld insisted.

"Regardless of how the party or the GOP voters feel, Donald Trump doesn't represent me as a Republican, as an American or as a human being."