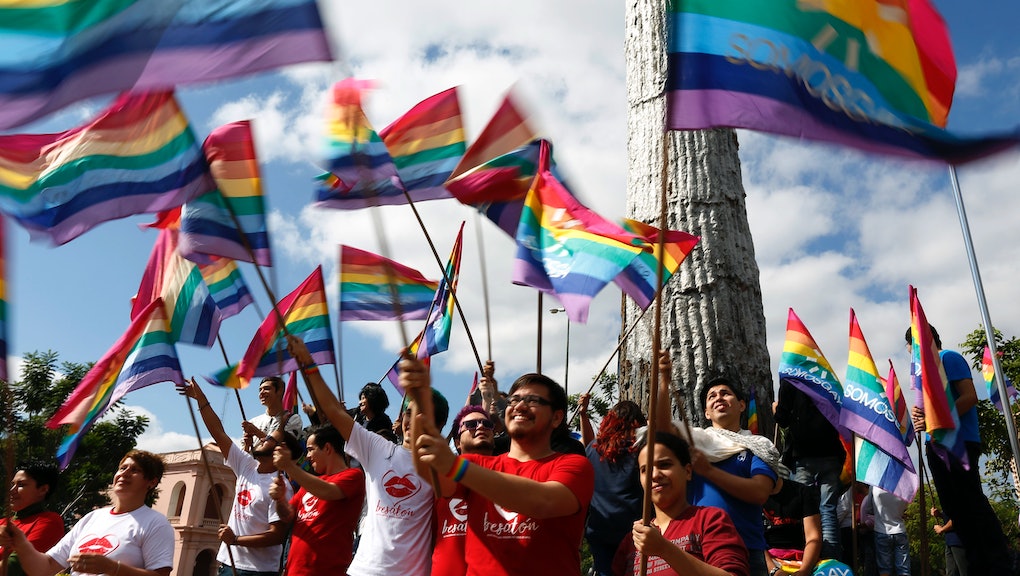 Countries Where Being Gay Is Illegal and Even Punishable by Death, in One Map

In a couple weeks, the United States will celebrate the one-year anniversary of the legalization of same-sex marriage, a verdict the Supreme Court passed down June 26, 2015, just in time for New York City's annual LGBT pride march.

While the historic moment was seen as a tipping point for equality in the country and even around the world, there are ever-present reminders gay and lesbian people are often treated like second-class citizens, even to the point of facing capital punishment.

Over 76 countries have some kind of law criminalizing homosexuality, and in a handful, having gay sex is still punishable by death.

Read more: If You Care About LGBT Rights, Don't Travel to These 7 Countries

In 2014, Abdullah Ghavami Chahzanjiru and Salman Ghanbari Chahzanjiri were reportedly hanged for "consensual sodomy." According to the Daily Beast, Iranian outlets didn't explicitly mention homosexuality as their offense, but called the two "immoral villains."

"The three convicts were sentenced to death based on the articles 108 and 110 of Iran's Islamic penal code, for acts against the sharia law and bad deeds," a judge reportedly said at the time.

The Washington Blade reported in March that Saudi officials were pressing for the death penalty for coming out as gay, amid the country's enduring death penalty associated with consensual gay sex.

Other expressions of gender identity and sexual orientation are similarly condemned, with the Blade reporting authorities prosecuting 50 men for allegedly wearing women's clothing and a man who was said to have flown an LGBT pride flag over his home. As it stands, a reported 35 men are currently in prison for sodomy charges.

The International Press Service reported in 2013 that some eight gay men had been killed in the streets for their sexual orientation at the hands of extremists. The Yemeni government, sources told IPS, have done nothing and continued to arrest hundreds of men on charges of homosexuality.

76 Crimes, a website that documents anti-gay laws worldwide, wrote on a few of the crimes against the country's gay population documented in Law Center North Ireland's 2016 "Report on the Treatment of Gay Persons in Somalia." According to the site, a citizen can face up to three years in prison for being gay, but if a judge holds a strict interpretation of Shariah law, he may choose to punish the crime with death.

Like other countries with anti-gay laws, there are often reports of stonings and murders at the hands of the public in Somalia, though the veracity of them is frequently called into question.

The Law Library of Congress' 2014 report "Laws on Homosexuality in African Nations" states Sudan's penal code punishes sodomy with "flogging by 100 lashes" and up to five years in prison. For a second offense, anyone found guilty "shall be punished with flogging by one hundred lashes and imprisonment." A third offense is grounds for life imprisonment or death.

The law codes gay sex as "gross indecency," and that charge, along with anything else deemed "homosexual behavior," can warrant the death penalty in states where courts uphold Shariah law more rigidly.

According to Cornell's death penalty database, consensual same-sex sex between Muslim men is punishable by death, though the site says it's unclear as to whether or not death is the mandatory sentencing in every case.

Sexual relations among gay people are often delineated in Mauritania's penal code with the word "zina," a term used in the penal code to describe moral offenses including adultery, fornication, rape and homosexual conduct, the penalty of which is death.

While there's certainly no federal law in the U.S. criminalizing homosexuality, as of 2014 there were 12 states maintaining anti-sodomy laws, a decade after they had been ruled unconstitutional by way of the 14th Amendment.

Former Republican presidential candidate John Kasich told CNN in April that he advises LGBTQ people just "get over" their oppression because it will "settle down." Meanwhile, LGBTQ people are still more likely to be poor, or to lose their jobs based on their sexual orientation of gender identity; people like Kim Davis and Judge Ruth Neely refuse to do their jobs based on their religious beliefs; and states like Mississippi and North Carolina are introducing anti-LGBTQ legislation all of the time.

And just because the government doesn't punish homosexuality with death, doesn't mean gay, trans and gender nonconforming people don't face the fear of death in the United States.

"We need to send a powerful message to the world in a unified voice: that we can fight for social justice for everyone, everywhere and change the world, not just get married," Chelsea E. Manning wrote for the Guardian in June 2015.