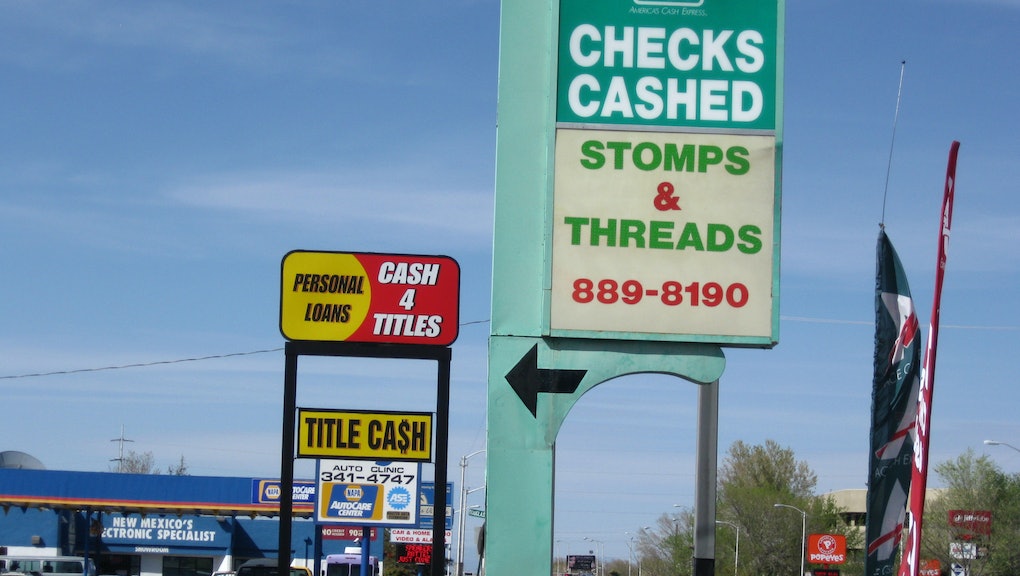 The Consumer Financial Protection Bureau proposed new rules Thursday that represent the federal government's first attempt to regulate payday lending, an industry that provides quick and small loans to financially strapped individuals with interest rates that can reach 400% or higher.

Some states have made attempts to crack down on the astronomical interest rates and fees that payday lenders impose on their typically low-income borrowers, but there have been no national measures taken to limit their activity to date.

The CFPB's new rules seek to address the quicksand-like "debt trap" that many people who borrow from payday lenders find themselves in — most people who use payday end up rolling them over when they're due, or re-borrowing shortly after their initial loan. All the while, interest and fees mount at rapid clip.

Read more: One Statistic Sums Up Why For-Profit Colleges Are a Complete Disaster

"Too many borrowers seeking a short-term cash fix are saddled with loans they cannot afford and sink into long-term debt," CFPB Director Richard Cordray, said in a statement. "It's much like getting into a taxi just to ride across town and finding yourself stuck in a ruinously expensive cross-country journey."

According to the Washington Post, one rule the CFPB is proposing would require payday lenders "a cooling-off period after three consecutive payday loans." As the Post notes, CFPB data shows that 45% of payday clients borrow four or more loans in succession, and 15% end up borrowing 10 or more.

The second rule requires payday lenders to take into account a borrower's actual ability to pay off any loans they end up receiving. That means looking into customers' income and credit, and limiting lending to those who have the means to pay the loan off. There are major exceptions to this, including if the loan is $500 or less. That's a relatively high cut-off rate, considering that low-income borrowers can often get quickly caught in four-figure debt traps after taking out a few loans worth a few hundred dollars.

The Post reports that the rules will be reviewed for months and face potential legal obstacles before going into effect.

The payday lending industry is up in arms about the new rules, arguing that limiting their ability to provide loans will cripple their business model. But if your business model hinges on milking the most desperate members of society for cash — payday lenders collect 75% of their loan fees from customers who have more than 10 loans a year, according to the Center for Responsible Lending. It's probably something that needs to be watched closely.