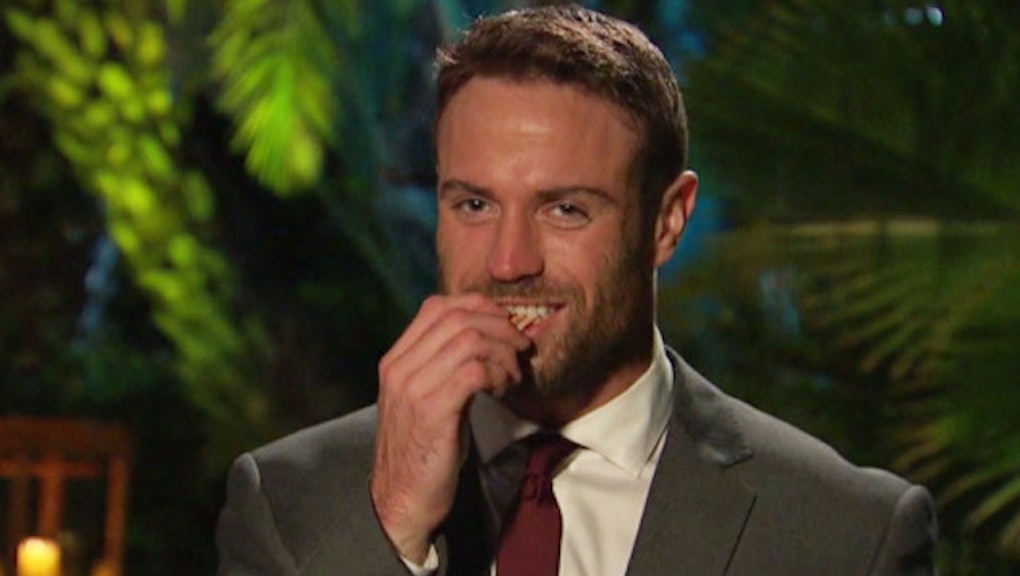 If you tuned in to this week's episode of the Bachelorette, you witnessed the massacre that was reality-TV villain Chad stuffing deli meat between his teeth and chewing it ever so slowly while speaking menacingly to the camera.

Whether you are aroused by another human shoving his face with cold cuts from across the table is of a personal matter. But 2015 research from Cornell University published in the journal Evolutionary Psychological Science may help reveal part of Chad's meatheaded behavior. The findings suggest a man will, indeed, overstuff his gullet in front of you if, A, you are a woman, and, B, he is trying to impress you. Aww, he likes you, Jojo!

According to the Evolutionary Psychological Science article entitled "Eating Heavily: Men Eat More in the Company of Women," researchers found that dudes consume more food in the presence of a lady than they do when snacking with another dude. Over the course of two weeks, researchers observed 105 adults at an all-you-can-eat Italian buffet (Chad's real paradise — soppressata), recording the number of pizza slices and salad bowls each participant consumed, as well as the participant's gender and the gender of their lunch buddy.

Guys with at least one female dining companion ate 93% more pizza and 86% more salad than men who ate only with other men.

"The findings suggest that men tend to overeat to show off" the study's lead author Kevin Kniffin, PhD of Cornell University, said in a news release. "Instead of a feat of strength, it's a feat of eating."

While Chad has managed to show off through multiple mediums (see: doing pull-ups from a rooftop with a suitcase packed with whey protein powder attached to his waist), the interesting thing here is that, from perspective of the couch, at least, Chad exhibited these peacocking behaviors mostly in front of the other men. The seduction tactic, however, didn't garner much respect from his male housemates, save for "male model" Daniel, with whom the libertine is brewing a bromance.

Now that there's more understanding about where the malevolent douche is coming from, perhaps there's more room to make in our hearts for him. What's the real difference between sympathy and pity, anyway?