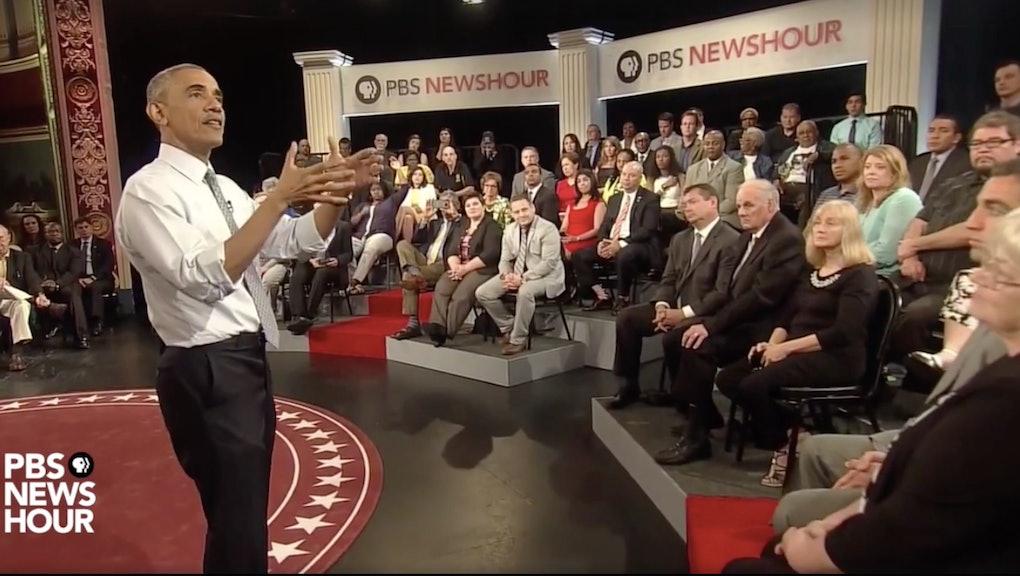 On the same day that that a shooter opened fire at the University of California, Los Angeles, leaving two dead, President Barack Obama appeared at a town hall Wednesday in Elkhart, Indiana, for PBS NewsHour. An audience member asked him about gun control, accusing Obama of being too radical on the issue.

Obama's reaction was anything but lukewarm: "Do you know that Congress will not allow the Centers for Disease Control to study gun violence?" Obama said in response to the Elkhart resident's question about why he and former Secretary of State Hillary Clinton wanted to restrict "good people" from getting firearms. "They're not allowed to study it. Because the notion is that by studying it, the same way we do with traffic accidents, somehow that's going to lead to everyone's guns being confiscated."

The president staunchly disagreed with the audience member's viewpoint that any kind of gun regulation was violating the rights of said "good people."

"So, sir, I just have to say respectfully, there is a way to have common-sense gun laws," Obama concluded in his response. "But the only way we're going to do that is if we don't have a situation in which anything that's proposed is viewed as some tyrannical destruction of the 2nd Amendment."

The interaction came as part of a few bonus questions the president fielded after the official broadcast had ended.

"I'd like to use Chicago, your hometown ... as my first example," the audience member said while challenging the president. "Why can't we round up these thugs, these drug dealers and gang members and hold them accountable for their actions, or allow the good people in Chicago access to firearms to protect themselves?"

Leaving the racial implications of the question aside, Obama said that he had not once suggested guns be taken away from Americans, but was instead a proponent of "common-sense gun laws" to keep firearms out of the hands of those who have a history or are suspected of violence. However, the president added, the mere mention of gun control precipitates political paralysis.

"We are not allowed to do any of that when it comes to guns, because if you propose anything, it is suggested that we're trying to wipe away gun rights and impose tyranny and martial law," Obama said.

He cited the government's response to automobile fatalities, which, thanks to regulation (like requiring seat belts and airbags), have declined by 25% over the past decade. Obama argued guns need to be approached in a comparable way, regulated for the sake of public safety.

However, the president added, the mere mention of gun control precipitates political paralysis.

In order to demonstrate the harmful ramifications of not regulating firearms access and manufacturing, the president also described an incident in the Situation Room from earlier that day in which he'd received intel on specific American citizens who were ISIS sympathizers.

"We're allowed to put them on the 'no fly list' ... but because of the National Rifle Association, I cannot prohibit those people from buying a gun," Obama said.

NRA lobbying on Capitol Hill is largely responsible for the aforementioned political paralysis. After the Sandy Hook Elementary School shooting in December 2012, champions of gun control were galvanized, campaigning for a change in existing laws. Yet they were financially no match for the NRA.

"The National Rifle Association outspent supporters of new gun controls [expanding background checks] by hundreds of thousands of dollars as the Senate considered and ultimately rejected legislation," the Hill wrote in April 2013.