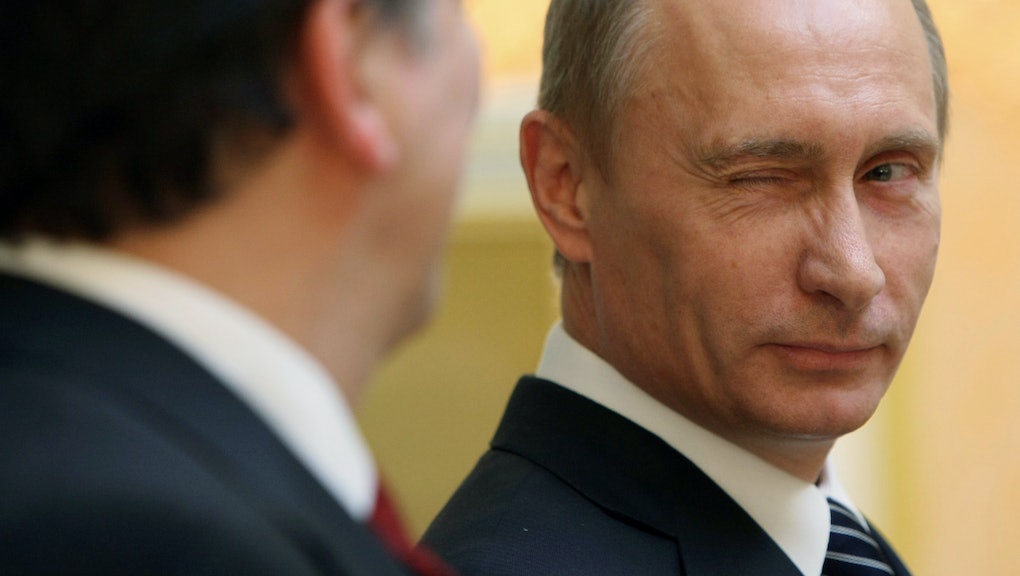 The Twitterati didn't take too kindly to Twitter's censoring, which subsequently stirred a digital ruckus. And in response Thursday, Twitter reinstated the account, entitled "Darth Putin," replete with a winky face profile picture.

People got riled up because Twitter banned an account in order to essentially protect a rich, powerful white man, while minorities and women are afforded no such dignities on the platform.  Just last week Twitter literally sent a woman's home address to her stalker after she reported him to the site.

And it wasn't just Putin who Twitter protected. Similar parodic accounts of the Russian ambassador to the United Kingdom and, Sergey Lavrov, the Russian foreign minister, were also suspended.

Darth Putin quickly got back to work upon the reinstating of his/her account.

As did faux-Lavrov, aka "Soviet Sergey":

Yet Twitter is not known for suspending accounts that disseminate misogyny, sexism or racism. Donald Trump is one such example. He has a prolific history of offensive tweets, yet his account has never been suspended. In 2012, he attacked Arianna Huffington by calling her ugly and saying he can "fully understand why her former husband left her for a man..." Charming.

In February, during a discussion at the American Magazine Media Conference, Girls creator, writer and star Lena Dunham said she would avoid using Twitter until it offered more protection for women against harassment.

"I found that the hostility towards women and the expressions of violence were too much," Dunham said. "And it's something that I've been very open about because I think Twitter is an important platform, but I think that they, as well as many media platforms — many internet media platforms, social media platforms — have to be putting more barriers in place for what is ultimately the violent harassment of women."