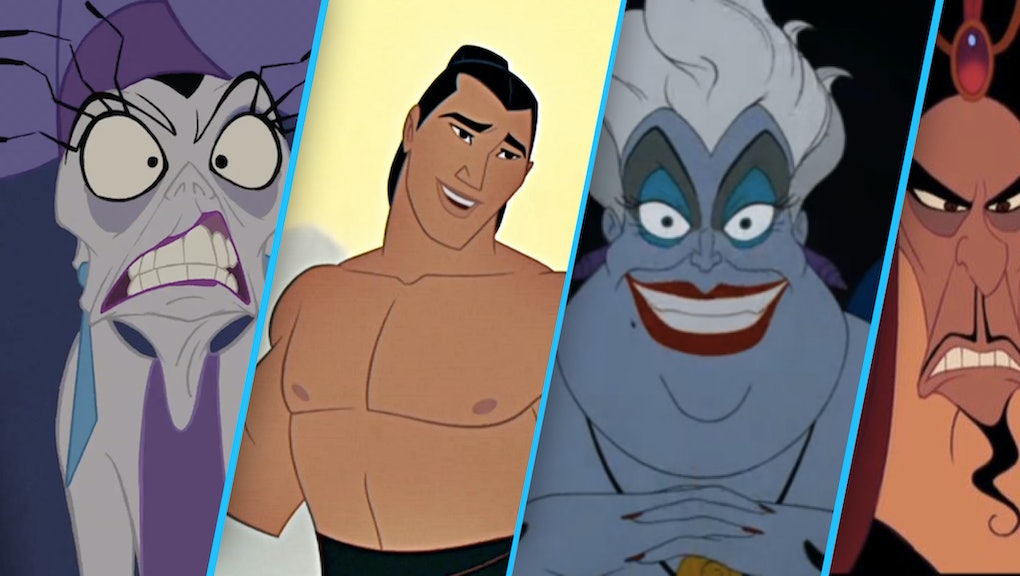 11 Disney Characters Who Are Queer AF

Fans want Frozen's Elsa to get a girlfriend. They loved seeing a lesbian couple — if only for a split second — in the latest Finding Dory trailer. The online chorus remains pretty clear: Fans want to see more out queer characters in animated films.

It only takes the fingers of one hand to count the number of out gay, lesbian or bisexual animated characters — many of whom are non-Disney creations like Mitch in Paranorman or Mr. Garrison on South Park. But if we're talking characters who have been read as queer, there are quite a few. Yes, some of their traits — butch haircuts, femme posturing and high glam — traffic in negative stereotypes, but many queer people have recognized a bit of themselves in these iconic characters.

Here are just a few.

Ursula is the baddest witch in the sea. She's also pretty queer: The AV Club reported that famous drag queen Divine, star of many John Waters films, served as a template for Ursula's body and attitude.

Jafar, one of the many foppish male villains — among them, Pocahontas's Governor Ratcliffe and his pigtails or "Gotta practice my curtsy" Scar from The Lion King — stands above the rest. While there are plenty of examples of queerness-as-evil in film, Jafar is a paradigmatic example not only because of his manicured beard and effeminate nature, but also his undying obsession with Aladdin, immortalized in this remixed, fan-made YouTube video.

Another charismatic, campy caricature of an aging diva is The Emperor's New Groove's main villain, Ysma — as much a queer icon as the Little Mermaid's sea witch. Like Ursula, its not hard to imagine a drag queen serving as the inspiration for the overly made-up, aging diva voiced by queer icon Eartha Kitt, who played Catwoman in the campy '60s TV show, Batman.

Behind every queen diva is a band of loyal followers — or at least one die-hard minion. The Emperor's New Groove gives us Kronk, the muscly gym bunny who subverts gender norms. Kronk worships Yzma. He enjoys cooking — he wants to start off his meals with soup and a light salad; he enjoys fashion and dancing. Had the film been made only a decade later, you'd expect half of Kronk's lines to be "Yaasss Yzma!"

Though Hercules' blue-fire-haired, hot-headed demigod may seem like another foppish villain that reads as queer, he's also so much more. Hades is not, like Jafar or Ursula, a villain working alone or with anthropomorphic minions. Throughout the film, he carries on a friendship with the doesn't-seem-100%-straight Megara, the film's lead damsel not-in-distress. With a sass that's always turned up to 10 and no shame in flaming blue hair, Hades is the villainous version of the gay best friend.

It's already clear that there's a boatload of queer subtext in Disney's underwater classic The Little Mermaid. The longing for acceptance, the need for Ariel to leave home and "find" herself — the whole narrative is pretty queer. But it's Ariel's no-nonsense best friend Sebastian who takes the cake for seemingly being the queerest character in the film. Sebastian's attitude throughout the entire film is "Gurl, no." While Flounder is the sensitive, supportive friend, Sebastian acts like the older, wiser gay whose trying to make sure Ariel doesn't go too crazy.

Speaking of best friends, Tarzan's Terkina is another best friend who registers on many viewers' gaydars: Terkina, aka "Terk" is an androgynous ape voiced by out lesbian Rosie O'Donnell. When terk, a tomboyish gorilla that rejects gender norms, has to put on a dress and makeup to carry out a ruse, she's angry at Tarzan for forcing her into the get-up — though, since she's a naked ape for most of the film, maybe she just hates clothes.

Though the two don't share affection onscreen, Timon and Pumbaa's enduring friendship and the love they show their pseudo-adopted son, Simba, read as if they're a couple of gay dads living life to the fullest within their nontraditional family. And, let's face it, "Hakuna Matata" may as well be an official anthem for gay pride.

Speaking of pride anthems, how can you not bring up "Let It Go"? And, by association, Frozen's Elsa, voiced by queer icon Idina "Adele Dazeem" Menzel. Her crowd-pleasing anthem is about learning to love the parts of yourself that others don't and finding the power to be true to yourself. There's a reason fans want Elsa to get a girlfriend — her story offers one of the clearest metaphors for the queer experience in the Disney universe.

Li Shang may be one of the most revolutionary of the seemingly queer characters in Disney's canon. While Mulan beats back against every gender norm in the book, Li Shang does so even more. Sure, he sings what may as well be the masc4masc anthem "Make a Man Out of You," but he sings it to Mulan's alter ego, Ping, with whom he shares a budding bromance. And when Mulan outs herself as Mulan and not Ping, Li Shang looks more than a little upset. Li Shang and Mulan never share a final kiss and the movie ends on an ambiguous note — is Li Shang in love with Mulan? Was Li Shang in love with Ping? Li Shang may truly be Disney's first and foremost bisexual character.