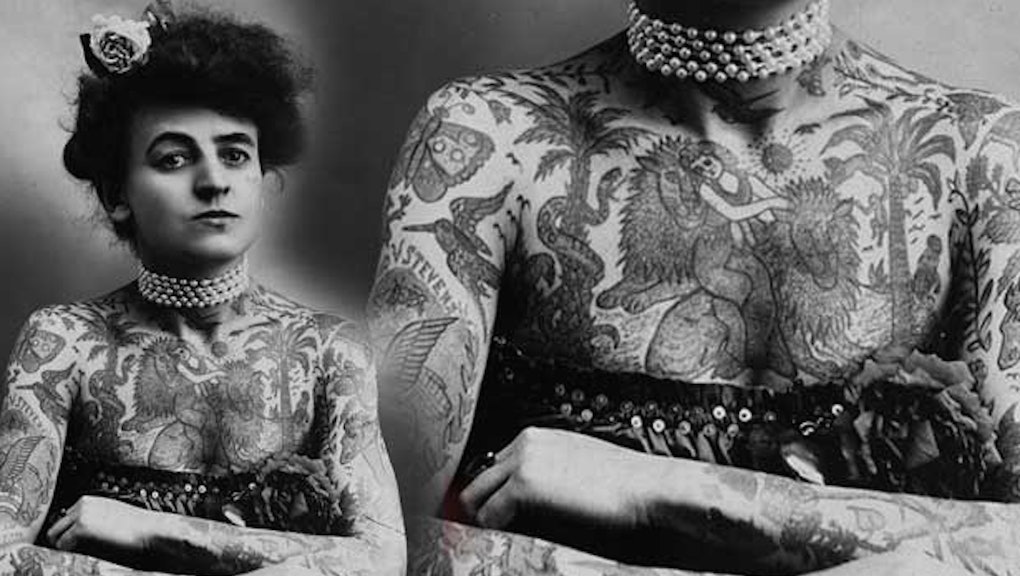 What comes to mind when you think about tattoo artists in the early 20th century? Probably a Sailor Jerry looking fellow, right? Has a mustache? Is covered in tattoos of mermaids and anchors? Drinks too much? Swears even more?

Well, chances are, that guy has nothing on the first known female tattoo artist, Maud Wagner.

As evidenced by a picture of her below from 1911, she looks not unalike comedian Jenny Slate with full sleeve and chest tattoos — which means she looks far, far cooler than your imaginary early 20th century artist.

In the early 1900s, she first made a living as an acrobat, aerialist and contortionist at the St. Louis World's Fair.

While working at the fair, she met Gus Wagner, who was known as the "Tattooed Globetrotter" and is a renowned tattoo artist who was the last to only work by hand, rather than use a machine. He was the one who's responsible for teaching her (then known as Maud Stevens) the now-trendy stick and poke method, which involves just a needle and a little ink. At the time, simple, streamlined designs were all the rage, so Wagner and Stevens' craft was ideal.

According to the book Inked: Tattoos and Body Art Around the World, Wagner initially tattooed Stevens in order to get a date and from then on, he insisted on teaching her how to tattoo herself and others. Eventually, almost her entire body was tattooed, which made her a carnival spectacle of her own.

Although many women before her had been tattooed, starting with ancient native populations as well as Olive Oatman in the 1850s, who was abducted by the Mohave people and tattooed by them and became a star, Wagner was the first woman on record to learn the art of tattooing herself, paving the way for many female tattoo artists today.

"She wore patriotic tattoos, tattoos of monkeys, butterflies, lions, horses, snakes, trees, women and had her own name tattooed on her left arm," Inked author Margo DeMello wrote. "Because she was extensively tattooed by her husband, she also worked as a tattooed attraction garnering considerable fame for herself."

The topic of women and tattooing is long and complicated with entire books written in honor of this subversive history. At first, tattooed women like Wagner were sideshow attractions, meant to only be the object of freakish desire. Especially with tattooed native women, who were put on display for hundreds of years by state fairs, they were seen as displays of primitivism. But as the years ticked on and more and more people passed down tattooing as a profitable craft, women and tattoos became more normalized, and eventually sexualized.

"Over the last 100 years," Amelia Klem Osterud wrote in Things & Ink magazine, "a stigma has developed against tattooed women — you know the misconceptions, women with tattoos are sluts, they're 'bad girls,' just as false as the myth that only sailors and criminals get tattoos."

Unlike Wagner, Britain's first female tattoo artist, Jessie Knight, fell into this sexualized trap while working as an artist during World War II. In several images of her tattooing, she's working on other women, who look more like pin-up girls than anything else. But in reality, Knight was an accomplished artist, who won the title of "Champion Tattoo Artist of All England" in 1955.

But before her, there was only Wagner, who died in 1961, and the legacy she was able to leave for women after her, which was a sort of unbridled independence. Throughout Wagner's career, the tattoo world was made up of entirely men, with mostly men getting those tattoos.

"She definitely established that women can do this art form just as much as men, so even though women were (and maybe still are) the minority in this field she gave inspiration to women down the line who wanted to get into the field and maybe weren't sure if they would be accepted and be able to make a living," Amy Black, a tattoo artist based in Richmond, Virginia, said in an interview.

Clearly, after her and since, the numbers of women in the tattoo industry have only grown to the thousands, with entire networks of female artists coming together in the name of some decent body art. And all of that is due to the fact that Wagner lived, dared, worked and prospered.

"She may have not been the most prolific early woman tattooer, but she is the first and I give her enormous credit and thanks for paving that way for all the women tattooing today," Black said.