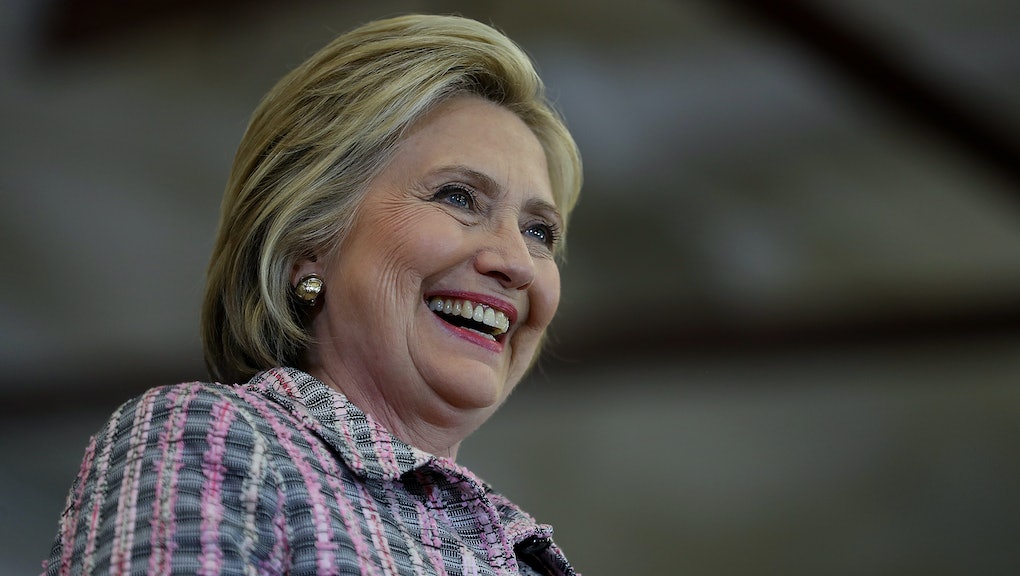 Hillary Clinton is now just 26 delegates shy of clinching the Democratic presidential nomination, after two massive wins in contests in the Virgin Islands and Puerto Rico over the weekend.

But despite her insurmountable lead, Sen. Bernie Sanders vowed once again to take his candidacy all the way to the Democratic National Convention in July.

"I have heard reports that Secretary Clinton has said it's all going to be over on Tuesday night. I have reports that the media, after the New Jersey results come in, are going to declare that it is all over. That simply is not accurate," Sanders said at a news conference in Los Angeles on Saturday.

Sanders' claims the convention will be contested because Clinton needs superdelegates — a group of party insiders and elected officials — to push her to the magic 2,383 delegate number to clinch the nomination.

However, unless Sanders wins all of the remaining contests on the calendar by about 40% margins, per statistics whiz Nate Silver, Clinton will end the nominating process with a majority of pledged delegates — or those doled out based on primary results.

And that would require Sanders to convince hundreds of superdelegates to flip sides and back his campaign, despite the fact that he's behind by millions of popular votes and hundreds of delegates — an unlikely scenario.

Sanders' campaign admitted as much to the Washington Post in May, saying if they didn't close the gap in pledged delegates, getting superdelegates to flip would be "practically impossible."

"I think it's going to be very, very difficult for us to persuade large numbers of superdelegates to move if we don't significantly make progress in the pledged delegate count," Sanders' senior adviser Tad Devine told the Post.

Since that interview, Sanders has barely closed the gap, shrinking the difference between his and Clinton's pledged delegates from 321 to 289.

It's not rare for superdelegates to push candidates over the delegate threshold needed to clinch the nomination.

In fact, in 2008, President Barack Obama was declared the presumptive nominee over Clinton, after superdelegates pushed him over the mark. And Clinton did not contest, conceding defeat and vowing to help get Obama elected.

Clinton is likely to reach the delegate threshold on Tuesday after polls close in New Jersey, where she enjoys a double-digit polling lead. She's likely to be declared the nominee before polls even close in California, the state Sanders has deemed a must-win for his long-shot bid.