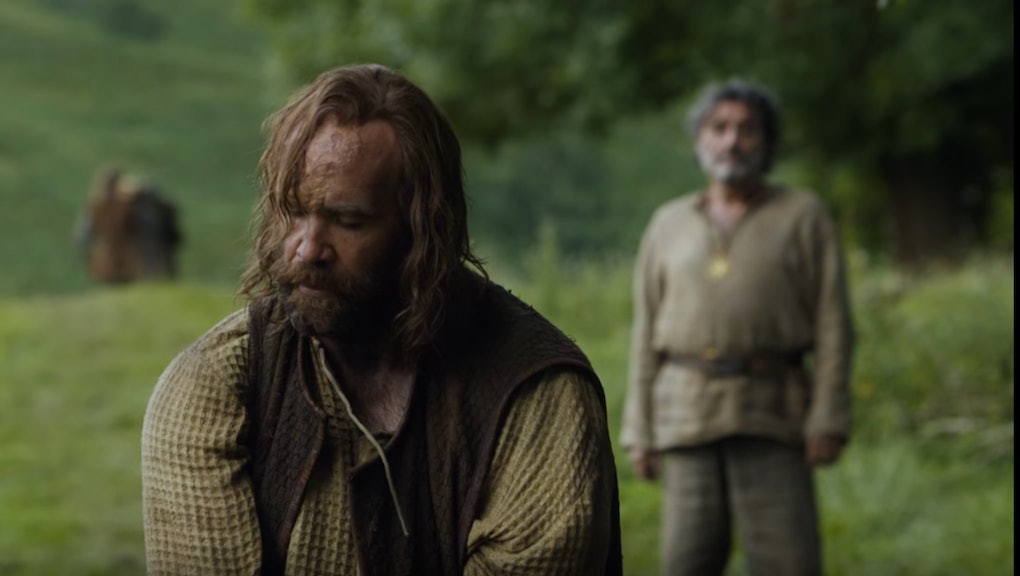 "The Broken Man," the seventh episode of the sixth season of Game of Thrones, began and ended with two of the seasons' most shocking moments to date — and that's saying something.

Sunday's episode continued its ongoing theme of mind-blowing resurrections and hotly anticipated returns with one of its biggest yet: In the episode's cold open — a seldom-used trick from the series' playbook — HBO treated fans to the return of Sandor Clegane (Rory McCann) — or the Hound, as most of Westeros knows him.

Having left his fighting days behind, we're reintroduced to the Hound as a member of a peaceful holy order led by Brother Ray (a delightful cameo by Ian McShane). Unfortunately, by the end of "The Broken Man," the Hound was fittingly left broken. Ray and the rest of his traveling companions were slaughtered — presumably by the Brotherhood Without Banners, with Ray left hanging from the would-be church they were building.

Thanks to this grim affair, chances are we're going to get our old, violent Hound back with little delay. But aside from the satisfaction of seeing the Hound hunt down the men who murdered his new companions, his return also lends credence to a widely popular fan theory that once seemed absurd.

Get ready for Cleganebowl.

Going back to the first season of the show, we got to meet the Hound and his imposing brother Gregor Clegane, also known as the Mountain (portrayed by Hafþór Júlíus Björnsson from season 4 onward), in King's Landing. As children, after catching the Hound playing with one of his toys, the Mountain pressed his little brother's face into burning coals — which totally isn't an overreaction.

There's a deep resentment between the two, but even in the midst of the series' constant battles, they've always been on the same side. However, they did come to blows very briefly during a tournament at King's Landing, after the Mountain was beaten by Ser Loras Tyrell (Finn Jones) in a joust. Infuriated, he butchered his own horse and attacked Ser Loras. The Hound quickly intervened, but the fight was quickly halted by King Robert Baratheon (Mark Addy).

Since then, the Mountain still lives, but is currently a Frankenstein-esque version of himself after his trial-by-combat with Oberyn Martell (Pedro Pascal). He serves as Cersei Lannister (Lena Headey)'s loyal bodyguard, and if the next episode preview is any indication, is poised to begin ripping apart members of the Faith Militant at her command.

Meanwhile, the Hound's been wandering across the Westerosi map since abruptly leaving the Kingsguard and King's Landing. He was imprisoned by the Brotherhood Without Banners before teaming up with Arya Stark (Maisie Williams). They formed an unlikely, albeit tense, friendship. Arya grew to depend on the Hound for survival, though she was still unwilling to forgive him for killing a butcher's boy on the road to King's Landing in season one.

Arya's thirst for vengeance ultimately wins out, as she chooses to leave the Hound to die after he suffers severe wounds in a fight with Brienne of Tarth (Gwendoline Christie).

That's where we last saw him at the end of season 4, but fans have been hyping up Cleganebowl — a showdown between the Clegane brothers — even prior to his return on Sunday. It's entertaining to think about, to be sure, but how would it work?

Going back to Cersei, she still has to stand trial for her crimes, despite her Walk of Atonement. Based on the aforementioned Faith Militant butchering in the next episode by the Mountain, it might force the High Sparrow (Jonathan Pryce)'s hand to begin the trial. Of course, Cersei is going to opt for a trial-by-combat, as she's explicitly stated in recent episodes. The Hound, meanwhile, is in good company with the Faith, for all intents and purposes, following his peaceful respite with Brother Ray. Who better to represent them in a fight that's basically against Frankenstein's monster?

The show hasn't offered any indicator that the High Sparrow might have anyone else on his side that could compete with the ferocity of the Mountain. Moreover, the narrative would align the Clegane family with a greater arc in the story: the future of Cersei and House Lannister. Though George R.R. Martin certainly maintains a lot of separate plotlines, they're going to have to start coming together as both the novels and the TV series begin their approach toward the endgame. This would be one great tie-in.

Now that the Hound is officially back, the concept of Cleganebowl has escalated from an excited, hopeful murmuring to a fever pitch. And Twitter can hardly wait for the showdown.