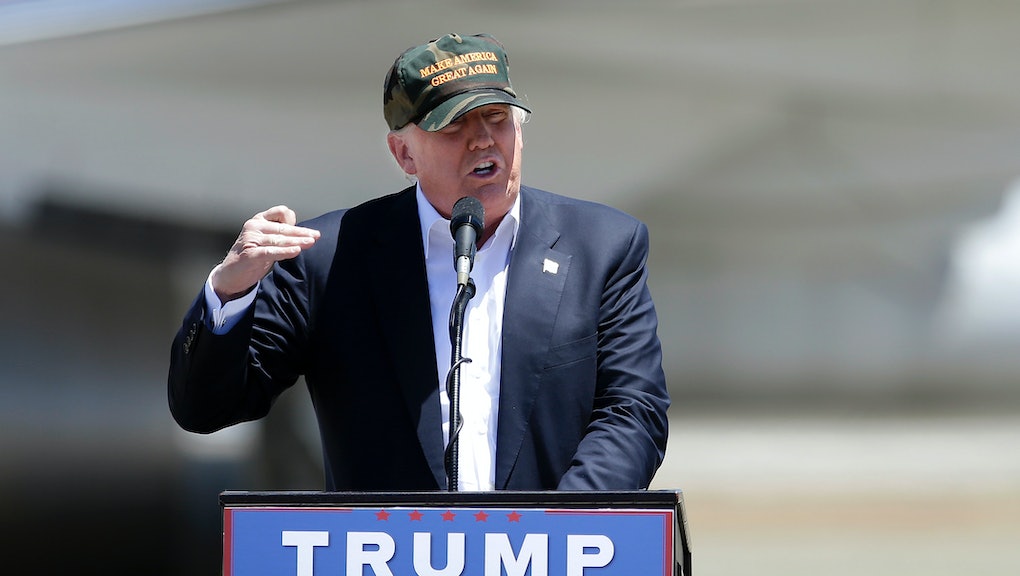 Presumptive Republican nominee Donald Trump seems to take any opportunity to tout his popularity with minority voters — even when it's completely fabricated.

On Saturday, Trump quoted a tweet from user @Don_Vito_08, who had written, "Thank you Mr. Trump for standing up for our country!" and called for his followers to #VoteTrump2016 and join him on the #TrumpTrain. Accompanying the tweet was a now-deleted photo of a black family alongside a meme reading, "American families for Trump. We need a common sense president."

It didn't take long for Twitter users to use their own common sense, and sleuthing skills, to figure out that the tweet was a sham. User @MarkCzerniec pointed out that the photo @Don_Vito_08 and Trump had shared was ripped from a WCPO Cincinnati story about the 27th Annual Midwest Black Family Reunion which took place in August 2015.

According to BuzzFeed, the family photo is among the first Google image results when searching "black family." And what's more, after speaking with Eddie Perry — one of the people in the photo — BuzzFeed determined that the family hadn't known Trump (or anyone else) would be using it.

"When I saw it, I immediately knew it was political propaganda," Perry told the site. He said a friend had sent him a screenshot of the tweet on Saturday morning.

He continued, "Why use it without asking for someone's permission? Why use our image without asking?" Perry told BuzzFeed that his family hasn't publicly endorsed Trump, or any candidate, this election season.

Trump has taken advantage of the sketchy stylings of @Don_Vito_08 before. The watermark on the family photo in the original tweet (@Don_Vito_08's Twitter avi) also appeared on a meme Trump tweeted out comparing his wife Melania Trump to Ted Cruz's spouse Heidi Cruz.

But this recent Twitter faux pas comes at a particularly coincidental moment. Trump was recently criticized for his comments at a rally on Friday, when he pointed to a black man in the audience and exclaimed, "Look at my African-American over here!" Trump singled out the man, who NPR identified as a man named Gregory Cheadle, as evidence of his "tremendous African-American support."

"I am not a Trump supporter," Cheadle told NPR. "I went to go hear Donald Trump because I have an open mind."

Read more: Donald Trump Blames "Thugs" and "Illegals" for Violence at His Rallies