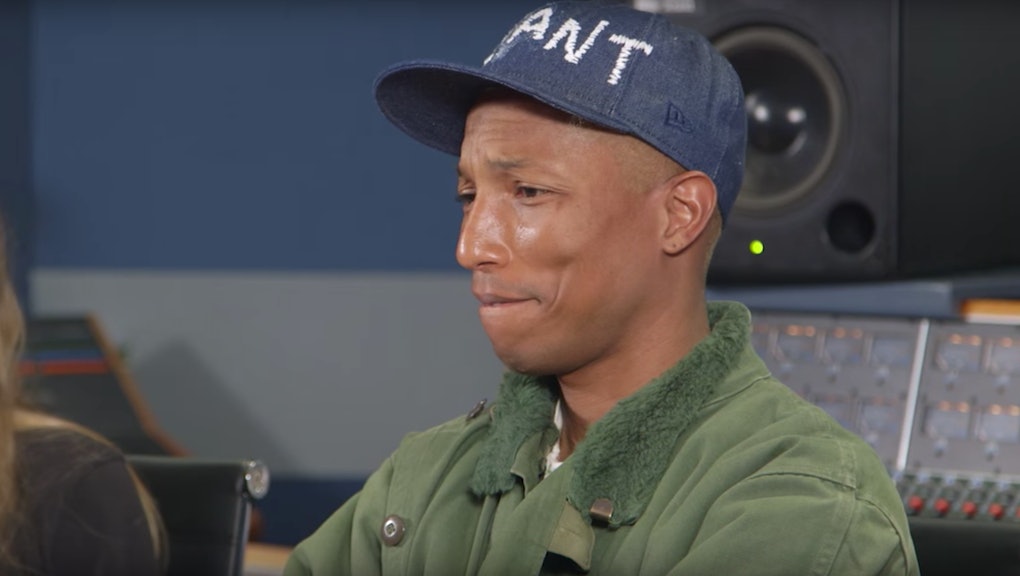 30 Seconds of This Music Student's Song Had Pharrell in Tears

Pharrell Williams has two of the most trusted ears in the entire music industry. He's got a decade of hits stashed in his Wikipedia covering folk, soul, hip-hop and chart-topping pop. When he hears and likes a song, it's likely one worth paying attention to. If he listens to a song and it turns his face into the crying Jordan meme, that's something else entirely.

In March, hitmaker Pharrell Williams hosted a masterclass at New York University's Tisch School of the Arts. In a video Jezebel dug up Saturday, the musician offers tips and feedback to young artist. Listening to the light, synth-y folk of one of young student, Maggie Rogers, he could barely summon a word.

Breaking it down play by play, the pop music veteran first appears stunned by what he's hearing.

As the beauty continues to wash over him, Pharrell is brought nearly to the point of tears. When they do come, he lets them show — composure is overrated.

"Wow," Pharrell says when her song ends. "I have zero, zero, zero notes for that, and I'll tell you why: You're doing your own thing. It's singular."

Trying to sum up his feelings, he compared the young folk singer's music to that of the Wu-Tang Clan.

"When the Wu-Tang Clan came out, no one could really judged it," he said. "You either liked it, or you didn't, but you couldn't compare it to anything else."

Maggie Rogers, the new Wu-Tang, keep an eye out and check out some of her music on Bandcamp or SoundCloud. You can watch Pharrell's epiphany below starting around 18:22.