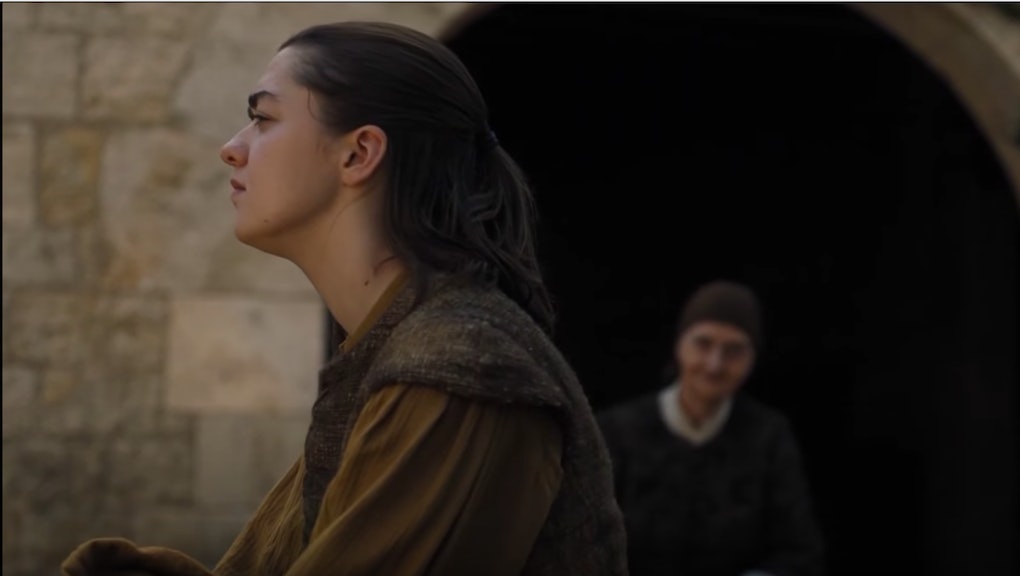 'Game of Thrones' Fans Are Freaking Out Over This Mindblowing Screenshot

While her siblings were dealing with the unrelenting sass of 10-year-old Lyanna Mormont — Game of Thrones' newest and youngest, badass — Arya Stark was trying to find a way to escape Braavos and the Faceless Men she defected from. She found a man sailing to Westeros, and offered him money for a cabin on his ship.

All was well and good, but as Arya was admiring the Titan of Braavos on a bridge, an old woman crept toward her, and soon enough, she was being stabbed in the gut multiple times. Unsurprisingly, that old woman was the Waif in disguise, but before she could finish her off, Arya pushed her back and jumped into the water.

Arya's obviously survived the outcome, but she's badly wounded and the reality she should've already been cognizant of hits home: The Faceless Men can attack her, as anybody. However, what if that wasn't actually Arya?

As Redditor woohiya points out in a screenshot, before Arya walks to the bridge, she passes a character who looks a lot like her. Perhaps, then, she was able to put her mask on another girl, to lure out any would-be attackers.

Moreover, Arya's previous attire supports this theory. While she was posing as Lana, an orphan who sells oysters (and clams and cockles), she wears an outfit and hairstyle that is strikingly similar to the person she passed on her way to the bridge. For comparison:

Conversely, as another redditor, passingwisdom, theorizes, even if it was Arya who was stabbed, it could also be part of an elaborate ploy to get the Waif out in the open. She could've utilized the help of the actress Lady Crane to get the same pouches of pig's blood used in the play around her body. With the Waif assuming she is hunting down an injured girl, it would be an unexpected reversal of fortune to encounter a fully healthy Arya, with Needle now in her possession.

We'll likely know the extent of Arya's injuries, or lack thereof, in Sunday's episode, "No One" — the name alone suggests a culmination to the Faceless Men narrative. Perhaps — as many fan theories suggest — Arya was playing the Waif the whole time, and we can now see the full extent of her training.

Either that, or Arya was simply stupid enough to walk around in public, despite faceless assassins on the hunt for her.

Read more: This 'Game of Thrones' Theory Is the Worst Thing to Happen to Sansa — Or Her Trump Card