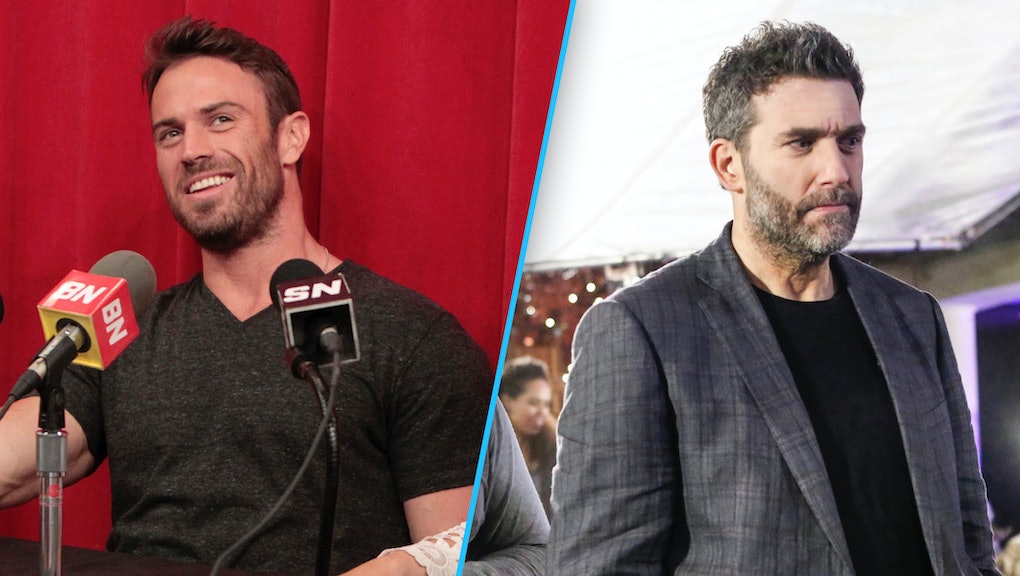 'The Bachelorette' and 'Unreal' Are Simultaneously Rejecting Men's Rights Activism

Logically, Lifetime's Unreal and ABC's The Bachelorette should have a lot in common. The former show is based on creator Sarah Gertrude Shapiro's experience behind the scenes of The Bachelor. Unreal's show-within-a-show Everlasting features its first black suitor this season, seemingly a response to The Bachelor franchise's own racial blindspot.

But there's one storyline the two series share this season that's a remarkable coincidence. Both shows feature men with beliefs remarkably consistent with those shared by men's rights activists: an almost carnal thirst for power and a deep desire for respect. And the shows feature something else in common, too: women rejecting those beliefs.

On Monday's episode of The Bachelorette, this season's resident jerk Chad continued his campaign of douchery from the previous week. In that episode, Chad manipulated Bachelorette JoJo by "negging" her: calling her "naggy," grabbing her ass instead of participating in the group date challenge, etc. It worked then, resulting in a passionate makeout session — but a similar strategy blew up in his face on the newest episode.

(Editor's note: Spoilers for Monday's episodes of The Bachelorette and Unreal ahead.)

In a group date challenge, JoJo's men were asked to share sex stories with the group. After being roasted by fellow contestant Evan, Chad got physically violent with him, ripping his shirt. Then, just like last week, he declined to participate in the challenge, not offering up a sex story. Instead, he attempted to kiss JoJo — and she demurred away from it by offering her cheek instead. Then, she gave Evan a rose for the date instead.

Chad is not explicitly a men's rights activist, but his "negging" tactic is remarkably in line with strategies used by MRAs. As the Huffington Post's Emma Gray put it in reaction to last week's episode, "Essentially, Chad is a caricature right out of the He-Man Woman Hater's Club or an MRA subreddit — toxic masculinity, personified."

On Unreal, which premiered its second season Monday, Everlasting producer Chet (Craig Bierko) has become an MRA during the show's hiatus. He's much more explicit in his beliefs; as MTV News describes it, he "reappears on the Everlasting set as an angry MRA tweet in human-garbage form after a six-month stay at a 'paleolithic retreat center.'" In the first episode alone, he protests the woman-first focus of Everlasting and insists on a show about sex and primal urges.

"This show needs a major revamp," he tells former mistress and Everlasting executive producer Quinn (Constance Zimmer). "We're telling men that it's OK to swoop out of the sky in diamond-studded helicopters. Women don't respect that. You know what they respect? A man who can kill with his bare hands."

Because of his power as a major producer on the show, Chet is a lot more threatening than Chad. "For better or worse, male rage, male entitlement is very powerful," Bierko told MTV News. "Chet's really been knocked back, and he's coming back into the second season with a lot to settle. He wants his kingdom back."

It's a strange coincidence that Unreal and The Bachelorette, two shows without much respect for each other, produced similar stories about MRA beliefs independently of each other — and with similarly named characters, too. But at least one of the shows' stance on MRA beliefs isn't avoiding notice.

On the MensRights subreddit two days before the Unreal season two premiere, user windkirby expressed his concerns with the announced MRA plot, calling creator Shapiro's description of the movement "inaccurate."

"I'm still interested in giving the show a watch at some point," the user wrote. But, he added, "I'm certainly not expecting much depth of thought in regards to this plot line."

Considering how Unreal treats Chet — as every bit the "human garbage" as MTV News described him — windkirby and other MRAs likely won't react well to the Lifetime drama's second season — or to The Bachelorette, frankly. Through their female protagonists, both Unreal and The Bachelorette firmly and fully dismiss the men's rights movement.

JoJo denied Chad in favor of a man who showed he appreciates her. One can safely assume he's not long for the show considering his temper and JoJo's rejection of his kiss. In Unreal, Chet's MRA ranting causes Quinn to declare war. Thus, in the second episode of the season (screened for press), Quinn fights tooth-and-nail to stop Chet from ruining the show.

The Bachelorette and Unreal are opposing shows in many ways, the latter designed to brutally satirize the former. But on this issue, the series are aligned: MRAs have no place in the televised search for love, either in front of or behind the camera.