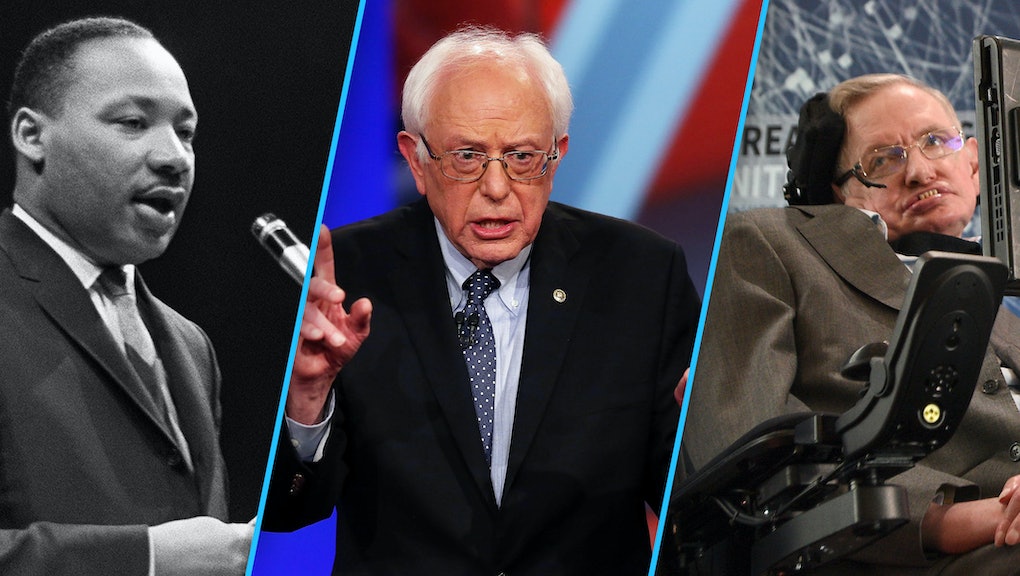 Basic income — the idea of radically redistributing wealth so that everyone would get a salary from the government just for being alive — is everywhere now. There are referendums in government, pilot programs and New York Times articles all examining whether basic income should be a part of America's future.

But basic income is not some new, futurist pipe-dream. Over the past century, some of the greatest philosophers, scholars, thinkers and activists in the world have suggested basic income as the ultimate solution to poverty and unemployment.

Here are their powerful words:

Martin Luther King Jr. is known ubiquitously for his work on racial equality in the United States, but central to King's political philosophy was protecting labor rights and abolishing poverty.

And an integral step in abolishing poverty, for King, was a minimum income measure.

"I am now convinced that the simplest approach will prove to be the most effective — the solution to poverty is to abolish it directly by a now widely discussed measure: the guaranteed income," he wrote his last book, Where Do We Go From Here: Chaos or Community?

During a Reddit Ask Me Anything session, a moderator asked world-renowned theoretical physicist Stephen Hawking, "Do you foresee a world where people work less because so much work is automated?"

"Everyone can enjoy a life of luxurious leisure if the machine-produced wealth is shared, or most people can end up miserably poor if the machine-owners successfully lobby against wealth redistribution," Hawking answered. "So far, the trend seems to be toward the second option, with technology driving ever-increasing inequality."

Hawking's reasoning speaks to the heart of why basic income is so popular in the past few years among Silicon Valley types: They believe if anything is going to push basic income from pipe-dream to necessity, it's going to be wide-spread technological unemployment.

Buckminster Fuller was a futurist architect, designer and inventor. You might know him as the geodesic dome guy.

In New York magazine in 1970, Fuller addressed the "challenge of abundance," asking why, if we have robots good enough to make all of the food and housing we need, everyone still has to have a job.

"We must do away with the absolutely specious notion that everybody has to earn a living," he said. "It is a fact today that one in 10 thousand of us can make a technological breakthrough capable of supporting all the rest."

Bernie Sanders put the words "democratic socialism" on the minds of America's youngest voters, starting a new leftist conversation around what the American government should provide citizens.

Sanders has been asked repeatedly on his stance on basic income, sometimes dodging the question. But in one Reddit AMA, he was more explicit.

"In my view, every American is entitled to at least a minimum standard of living," Sanders wrote. "There are different ways to get to that goal, but that's the goal that we should strive to reach."

Friedrich Hayek is one of the most discussed and influential thinkers in modern economics, and a champion of classical liberalism. Hayek's endorsement of basic income is often used when making the conservative and libertarian cases for basic income.

"The assurance of a certain minimum income for everyone, or a sort of floor below which nobody need fall even when he is unable to provide for himself, appears not only to be a wholly legitimate protection against a risk common to all, but a necessary part of the Great Society in which the individual no longer has specific claims on the members of the particular small group into which he was born," he wrote in part three of Law, Legislation and Liberty.

Robert Reich was the Secretary of Labor for the Clinton administration, and is now a professor, speaker, activist and author.

Reich is on the road these days trying to teach America how to fix capitalism, which he says has broken away from what makes it great. In a lengthy blog post examining the problem of unemployment, he finished by writing, "Ultimately, we'll need a guaranteed minimum basic income."

Bertrand Russell was a British philosopher, social scientist, mathematician and historian who was a part of the "first wave" of basic income thinking.

"A certain small income, sufficient for necessities, should be secured for all, whether they work or not," he wrote in Proposed Roads to Freedom, a book published in 1918 right before he went to jail for speaking out against American involvement in World War I.

Erich Fromm was a philosopher with a number of mainstream hits in the mid-20th Century, including The Art of Loving and Escape From Freedom.

In 1966, Fromm wrote a paper called "The Psychological Aspects of the Guaranteed Income," where he argued that basic income would offer humanity an unprecedented opportunity for personal freedom.

"Guaranteed income would not only establish freedom as a reality rather than a slogan, it would also establish a principle deeply rooted in Western religious and humanist tradition," he wrote "Man has the right to live, regardless!"