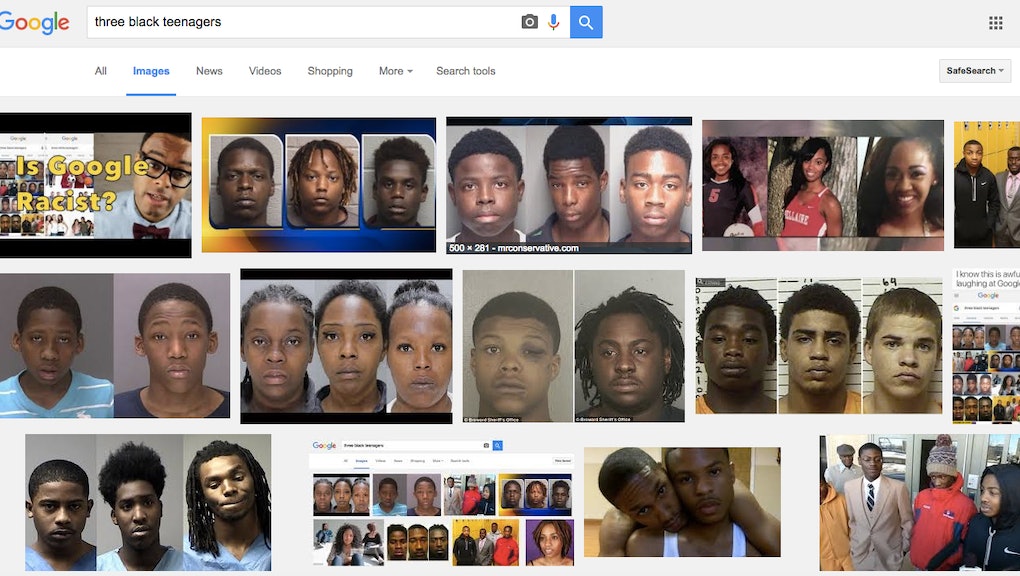 Curious, @iBeKabir says, "Let's just change the color" and swaps out "black" for "white." What appears is a sea of stock photos of blue-blooded white teenagers looking like they're having some good, clean fun.

Read more: Searching for This Racist Phrase on Google Maps Takes You to the White House

@iBeKabir isn't the first to notice the racist double standard: In March, U.K. blogger Antoine Speaks investigated whether there's a reason for the disparity and what the root cause of it may be. In a YouTube video, Speaks explains, "Google isn't racist — it literally shows you the most-wanted search results."

The stock photos of white people likely appear because there is a demand for them; individuals or companies are looking to purchase them, said Speaks, pushing them to the top of the page. On the flip side, the mug shots of black teens are typically associated with news stories about their arrests.

But, as Speaks points out, not all of the mugshots belong to convicted criminals. Many of them have been acquitted, yet the press continues to use their mugshots in articles about them.

The bias surrounding when outlets choose to share a mugshot has been playing out in real time as the press covers the case of Stanford sex offender Brock Turner, a white 20-year-old. Though he was convicted in March on three counts of sexual assault for assaulting an unconscious woman behind a dumpster, until Monday the Santa Clara county sheriff's office had yet to release Turner's mugshot. And, at first, the office only released Turner's sentencing photo, where he appears clean-cut and wearing a suit.

Back to the original question. Is Google racist? Yes — but only because we are.