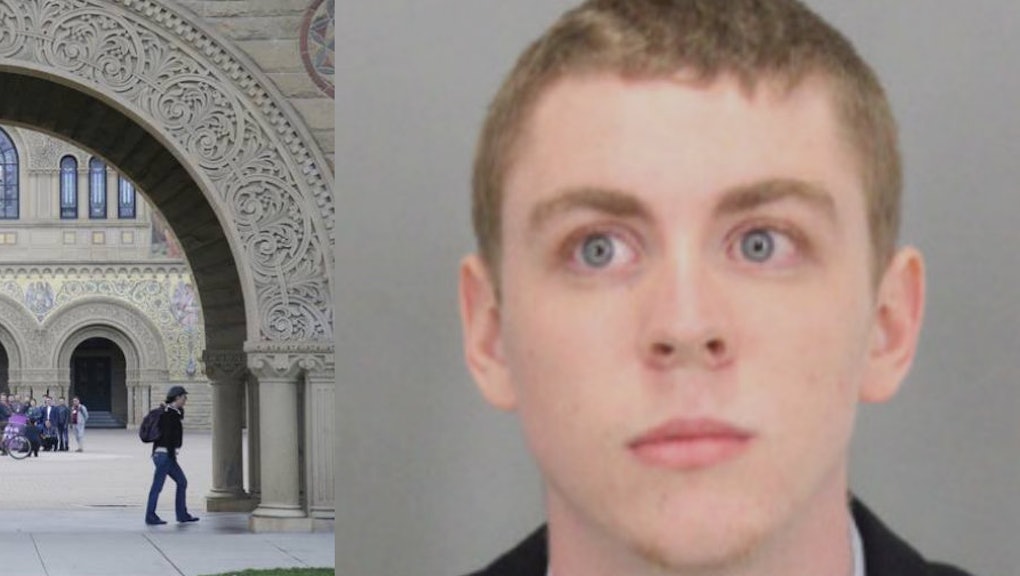 The case of 20-year-old Brock Turner, who was convicted of felony sexual assault charges last week, has drawn national attention for the controversy it sparked not just around Turner's sentencing, but for the way he has been portrayed in the media. In reporting on his story, media outlets — including Mic — were left to use what appeared to be a yearbook photo of Turner rather than his booking photos — because they weren't released to the public until Monday.

Among other things, the images used to illustrate Turner's story expose a double standard at play in the way the media treats young, white criminals versus young, black victims of violence. In the absence of Turner's mugshot, the convicted sex offender was pictured smiling in a suit and tie on the pages and screens of a plethora of news reports. However, black men like Sam DuBose and Michael Brown, who were victims of police violence, were not portrayed in the same light, but rather were portrayed in the media in discriminatory ways.

Many pointed out that using a yearbook photo of a well-dressed, smiling Turner only serves to support the narrative suggested by Judge Persky that he is somehow a special case or deserving of special treatment.

Turner's own family seems to subscribe to this narrative as well: In a leaked letter, Turner's father decried the loss of the life that his son "dreamed about and worked so hard to achieve."

Compare the seemingly benign images shared of Turner with some of the images that accompany news stories about black and brown men. According to Fusion, in 2015, NBC, BBC and CNN all used a mugshot from a previous, unrelated arrest to accompany reports about DuBose, an unarmed black man who was fatally shot by University of Cincinnati police officer Ray Tensing during a traffic stop. Tensing was indicted for DuBose's murder.

After 18-year-old Brown was fatally shot by Officer Darren Wilson in Ferguson, Missouri, in 2014, many criticized the media for circulating photos of Brown that helped to create bias.

The viral hashtag #IfTheyGunnedMeDown emerged as a way for people of color to call out the potential for manipulating a narrative by picking and choosing the photos that accompany news stories.

On Thursday, Turner was sentenced to only six months in county jail for sexually assaulting an unconscious woman outside a frat party. In handing down his decision, Santa Clara County Superior Court Judge Aaron Persky said that "a prison sentence would have a severe impact" on Turner, who, in addition to being a convicted sex offender, is also a former Stanford University student and competitive swimmer. The leniency sparked outrage among many people who pointed out that his sentence — six months — seemed disproportionate to the crimes committed.