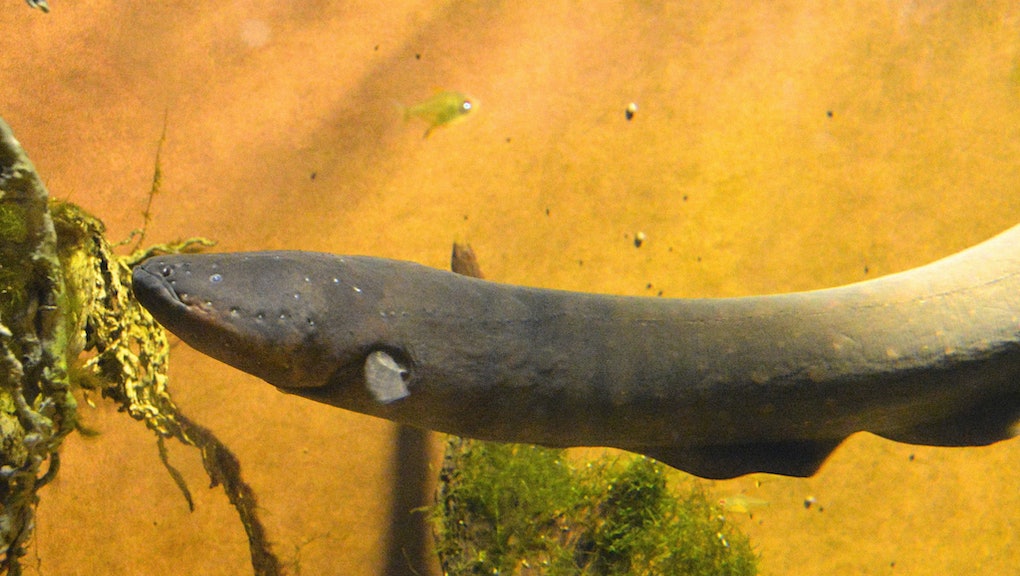 To add to the list of nightmarish situations to be caught in, it turns out that electric eels can jump out of water to electrocute their prey, according to a new video by Vanderbilt University.

Researcher Kenneth Catania observed that when caught in small bodies of water, electric eels — which can grow up to 8 feet long and weigh up to 44 pounds — will mimic a Taser by aggressively leaping up to attack something by smacking it with its chin.

With the eel's ability to deliver 600 volts, the victim's muscles will tense up and its entire body will freeze.

Catania noticed the eels' behavior when transferring them from the home cage to a smaller container in the lab. The eels would jump up and attack the scientists' metal net, fake hand (armed with LED lights when shocked) and a reptile head, which led Catania to think that the tasering is a form of self-defense. In nature, eels tend to breed during the dry season, which makes their aquatic habitats smaller and more susceptible to land predators.

But as a predator, electric eels can send electric pulses through the water, which wouldn't freeze the victim but instead cause it to twitch. The eel can then locate the prey based off the twitching movement and then stun it to eat it whole. But this only works if the prey is completely submerged.

This theory has been in question for about 200 years. In 1800, explorer Alexander von Humboldt documented how Venezuelan indigenous peoples would use horses to bait and hunt electric eels. The eels would leap up and attach themselves to the horses, making them visible to the trappers.

Now this behavior is confirmed (as if people needed another reason to avoid small pools of electric eels).

Watch Catania's video of an electric eel attack below:

Read more: The Irukandji Jellyfish Is a Thing of Nightmares — And It's About the Size of a Fingernail