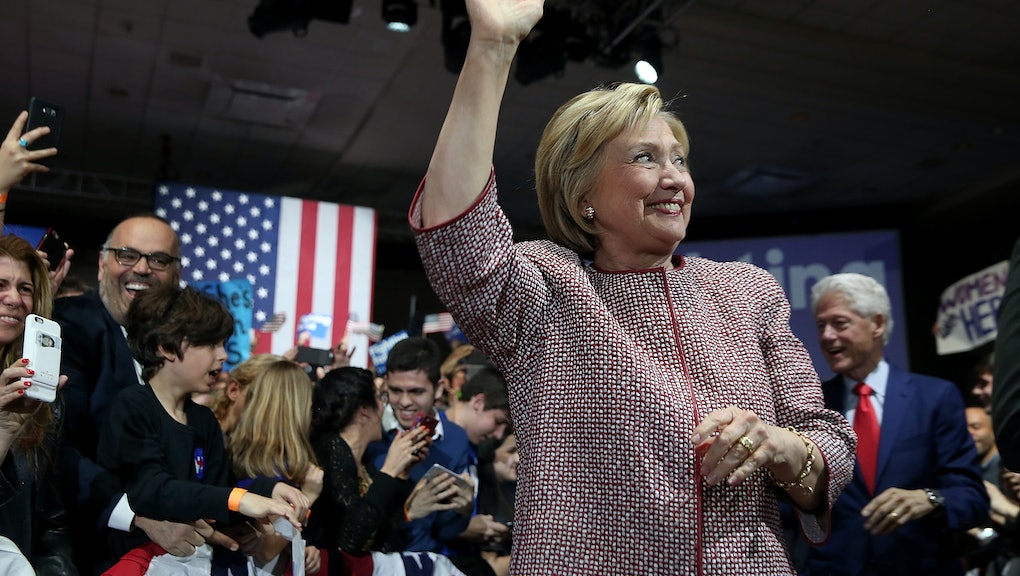 The Hidden Sexism in Calling Out Hillary Clinton's $12,000 Armani Jacket

During Hillary Clinton's victory speech after the New York primary in April, she talked about job creation, retirement schemes and inequality in America. And she just happened to do all of that while wearing a boxy, woven, mauve jacket designed by Giorgio Armani worth $12,495.

To some, the look was hypocritical. To others, it seemed like a massive oversight on her campaign's part.

How the Armani jacket came to exist probably has to do with the fact that Clinton recently hired a team of image experts, one of whom worked with Michelle Obama, that are in charge of taking her style and dress and making it more relatable. When's the last time you heard a rich man attempting to do the same? (That's right. Never.)

"She's had to have spent in the six figures on this wardrobe overhaul," political image consultant Patsy Cisneros told the New York Post.

This is what Hillary Clinton, the now-presumptive Democratic nominee for the president of the United States after big wins in California and New Jersey on Tuesday night, feels she must do in order to look acceptable.

What this latest instance of criticism really highlights is not just the attention that is paid toward what female politicians and public figures wear, but just how difficult it is to be deemed "acceptably dressed" by the American public when you are a woman. And unfortunately, this $12,000 jacket fiasco (which is now actually a $7,000 jacket fiasco, because the jacket is now on sale) is just the latest chapter in the long, tired history of political women around the world being called out for how much they spend on their appearance.

Clinton's not the first: In 2008, the Republican National Committee was blasted for paying about $150,000 for new clothing and accessories for their hopeful vice president Sarah Palin.

In 2011, then-Rep. Michele Bachmann was called out for spending $4,700 on hair and makeup in less than two months.

In 2012, Ann Romney, whose husband Mitt was running for president, almost took down a campaign when she wore a $990 shirt. "Does Ann Romney wear her $990 designer shirt while driving one of her two Cadillacs?" asked the Washington Post's Suzi Parker.

In 2013, German Chancellor Angela Merkel caught heat because she admitted to getting her hair and makeup done every day.

In 2014, Michelle Obama was criticized for wearing a $12,000 gown to a state dinner, when there's actually a good chance it was given to her as a gift.

"The reality is that the garment and textile trade has been a dying industry for the last 10 years. So why are we so excited when we see our first lady in cheap, imported clothes?" author Elizabeth Cline asked in the Huffington Post.

"Now we've got this system where you're either in designer clothes that no one can afford or you're in cheap, imported clothes," she continued. "I think, if anything, [Michelle Obama] should make people feel sad about the state of the fashion industry."

To add Clinton to this list, she was mocked in 2012 for not wearing any makeup at all as Secretary of State, with Fox News referencing an article stating that she looked "tired and withdrawn." Now, she wears a jacket worth more than $12,000 and without any proof that she actually paid that amount, people lash out. And, again, it is actually completely possible that she didn't pay $12,000 since high-ranking politicians (like Michelle Obama) are often gifted or loaned expensive pieces by the designers themselves.

More and more, it seems, with the attentiveness of the internet, female politicians are in a damned if they do, damned if they don't situation. Meanwhile, during all of this indignation over Clinton's jacket, Donald Trump has been open about his favoritism towards Brioni suits, which cost $7,000 a pop, and the media has so far been mum about them.

The political pink tax: What makes dressing as a female politician even more difficult now is what one might call the "political pink tax," or how much more clothing costs for women, versus men.

Just like razors and deodorant and shampoo, designer clothing for women is simply more extravagant. Take a shirt from Tom Ford. At Neiman Marcus, a button-down shirt for a woman by Tom Ford costs $1,490. A button-down shirt for a man by Tom Ford costs $570. At Saks Fifth Avenue, a sleeveless blouse by Burberry is $525. At that same store, a dress shirt for a man by Burberry is $250. When it comes to designer clothing, women often pay far more than men.

Another aspect of this political pink tax has to do with the additional attention paid toward what women wear, and how they simply cannot get away with wearing the same five suits over and over again on a cycle, like a man could. To show this fact exactly, an Australian TV news anchor conducted an experiment in which he wore the same suit for a year and absolutely no one noticed. Now, think about how the public usually reacts when famous women repeat outfits.

"I've worn the same suit on air for a year — except for a couple of times because of circumstance — to make a point," Australian newscaster Karl Stefanovic said. "I'm judged on my interviews, my appalling sense of humor — on how I do my job, basically. Whereas women are quite often judged on what they're wearing or how their hair is ... that's [what I wanted to test]."

In order to avoid criticism, women have to innovate — and that often means they have to spend money. Over the past few weeks alone, Clinton has worn blue and turquoise and black and white and purple and red and orange and even plaid. In the '08 cycle, she repeated outfits quite often, and obviously it ended up not paying off. So this cycle, she must innovate and, in turn, pay in order to avoid yet another uproar.

Amid this particular "scandal," what the real question may be for everyone is: Why do we care? Why, oh why, do we care enough to shame a woman who has a lot of money already, and has gone out and maybe paid $12,000 for a jacket? As first lady, seemingly the issue would be that some people think taxpayers pay the bill (they don't). Is it the fact that she was talking about inequality? In that case, has anyone pulled the price tags on President Barack Obama's suits?

What difference does it make if the woman who may very well have the nation's missile codes is wearing a $12,000 jacket or a $3 one from a bargain bin?