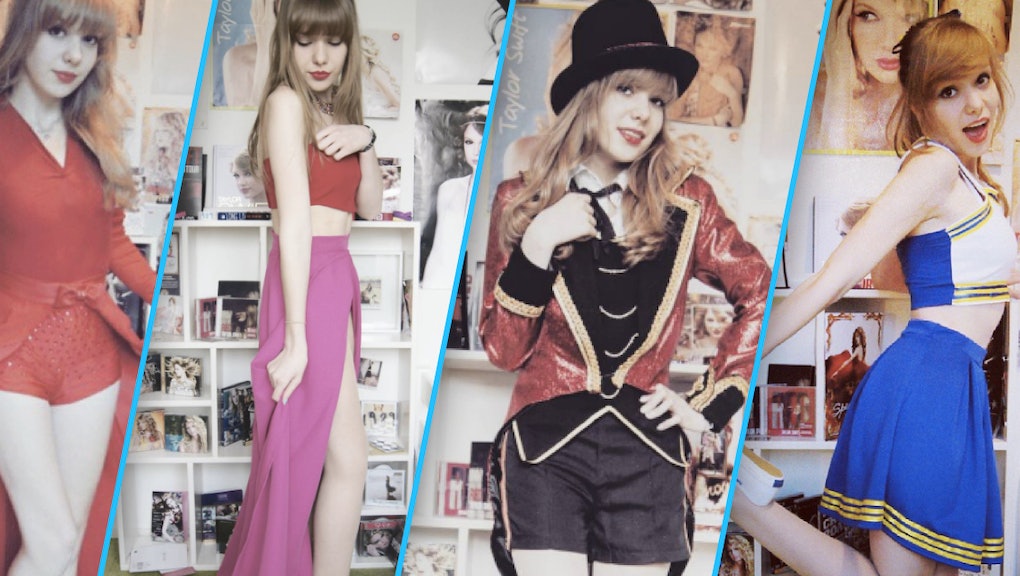 Teachers and supervisors are meant to inspire young people, to challenge them in their thinking while encouraging them to exceed any self-imposed confines. For 18-year old Netherlands native Lotte Lutjes, that was not the case, repeatedly being told "nobody cares and it won't get you anywhere."

"My school generally just doesn't really encourage art and creativity, so as someone who has a passion for those things I felt unwanted or wrong a lot," Lutjes said in an interview. "Whenever I'd mention wanting to do something creative after I graduated, I'd always be told not to, or 'Wow that's such a shame, you're so smart'. My supervisor once told me, 'Please just don't. Go do biology or something useful and keep that other stuff on the side.'"

Read more: T Swift Showed Up at a Couple's Wedding and Gave Them the Best Present Ever

Unbothered, or rather, keen to shake it off (#reference), Lutjes turned her love of Taylor Swift — not a teacher in the conventional sense, but no less influential to her myriad Swifties — into actionable inspiration. With an assist from her grandmother (and one trusty sewing machine), she turned some of her favorite Swift outfits into custom creations all her own.

"I had seen my grandma sew but I never thought I'd be able to learn it," Lutjes said. "I visited my grandma regularly and she'd help me out and teach me. I also started experimenting on my own and surprisingly, stuff actually worked. I also decided to start taking sewing lessons closer to home, as my grandma lives two hours away. I still do a lot of experimenting though, I never really know if something's actually going to turn out the way I had planned."

From tour outfits to video looks, even Tay's now-famous 2016 Grammy dress, Lutjes has not missed a beat when it comes to expertly memorializing some of Swift's most notable get-ups.

So why Swift? According to Lutjes, it's all in Swift's message.

"Taylor just has this amazing way of teaching people to follow their heart and dreams, no matter what other people think," she said. "I've had some issues with that in the past but thanks to her I feel so much more empowered. She taught me that there will be people trying to tear you down, tell you you can't do this and that, you'll never make it etc. but as long as you want it and are willing to fight for that goal, you will get there somehow."

Thankfully, her hard work paid off in March when Swift herself took notice of the teen's handiwork, reblogging one of her looks on Tumbr with the caption "Lol I thought that was me."

Naturally, Lutje turned the six-word callout into a T-shirt:

Her persistence is particularly noteworthy considering that in addition to a lack of inspiring leaders Lutjes has Charcot-Marie-Tooth disease, a common neurological disorder that makes it difficult for her to walk or stand for long periods of time. As a result, sewing garments turned out to be the perfect hobby — especially considering the fact that some of these outfits take months to make.

"The outfits are something different though, as it's not just making them and, oh it's done, next," Lutjes said. "I can wear them and feel proud and confident, something that can be quite a lot harder when your body doesn't cooperate and you sometimes feel like it hates you. I also feel less limited now that I've seen what I can do, disability or not."

As for other young who might be living with a disability, Lutjes has a message: "Don't let anyone tell you what to do or like you're less valuable than others," she said. "Your passions and actions define you, not your disability. If you love something, go for it and don't let anyone tear you down."