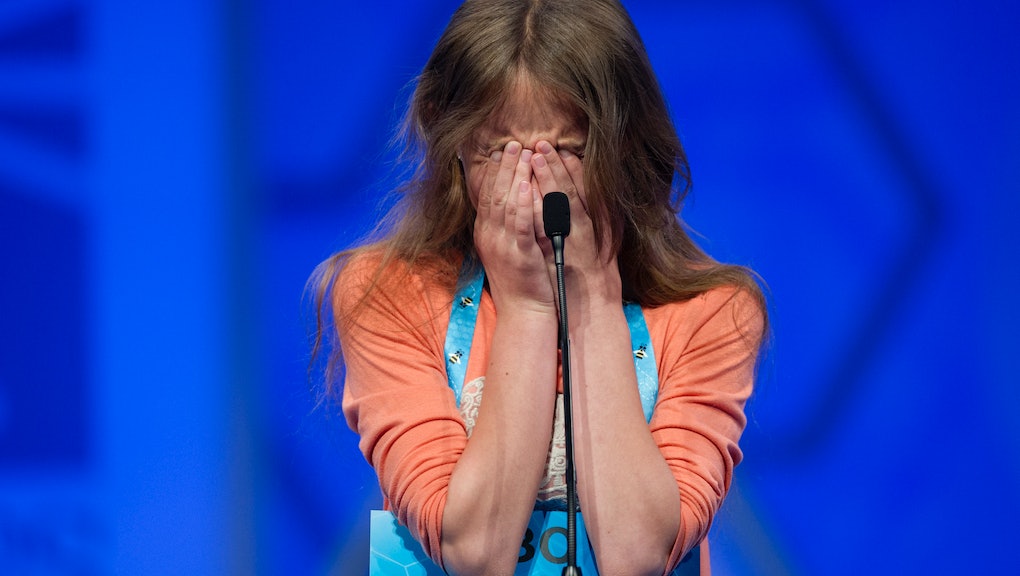 There's a member of my family who cannot, for the life of him, spell "definitely." He'll spell it with two f's or two t's, or leave out the e. No matter how hard he tries to get it right, he'll churn out something along the lines of "deffinatly."

He isn't alone. "Definitely" is among the most commonly misspelled words in the English language, according to the Oxford English Corpus. "Achieve," "believe," "friend," "weird," "independent," "successful" and "necessary" also made the list — among dozens more.

Some oft-misspelled words, like "foreign," have confusing "e-i" combinations; others, like "dilemma," have unusual sets of consecutive consonants. Whatever the reason, English speakers are getting them wrong again and again.

Why are some words harder to spell than others?

To get some answers, I first turned to Scott Isaacs, professional spelling coach and champion of the 1989 Scripps National Spelling Bee (his winning word: "spoliator").

If you ask Isaacs, it's the seemingly simple words that often prove hardest to spell — "simple words that have other words that are incredibly similar to them — not just in meaning, but also in spelling," he said Wednesday by phone. "It's easy to confuse the two."

Other words are tough to remember because they don't follow the rules of the English language, Dr. Hansa Bhargava, pediatrician and WebMD medical editor, said. Think "one," "two" or "shoe."

"The English language is difficult that way," Bhargava said Wednesday in a phone interview.

Why are some people better at spelling than others?

As with many human traits, it's a combination of genetic and environmental factors, Bhargava said.

The genetics: When we see words on a page, "some brains do tend to take photographs of those words better than other brains do," Bhargava said. Those people may naturally be able to recall words' spellings more readily than their stumped counterparts.

The environmental side: Your ability to spell may also have something to do with the way you were raised. Did you grow up surrounded by books — or was the culture in your home more TV focused?

"Reading is a big deal," Bhargava said. The English language doesn't always follow rules, so "the more you see certain words," she said, "it will help you spell those words."

Factors affecting cognitive development — such as diet and environmental toxins — may also have a positive or negative effect on a person's ability to spell, she said.

You can get better at spelling

If you definitely can't spell "definitely," there's hope: You can improve your spelling skills. Isaacs has a four-step trick for mastering a word you can never seem to get right.

1. Look at the word and spell it out loud.

"There are three general methods of learning: visual, auditory and kinesthetic," Isaacs explained. "This method uses all three."

Mnemonic devices also help — and the stranger they are, the better, Isaacs said.

He still recalls a middle school teacher who hated it when students spelled "a lot" without a space in the middle. The teacher "had all of us stand up in class one time and spell 'a lot,' but we had to stamp our feet in between the 'a' and the 'lot,'" Isaacs said. "We did that over and over and over again.

"No one, from that point forward, ever forgot that 'a lot' was two separate words."

In general, increase your exposure to different words, Bhargava said.

"The most important thing is just to read a lot more," she said. "Find parts of your day where you can fit that in."