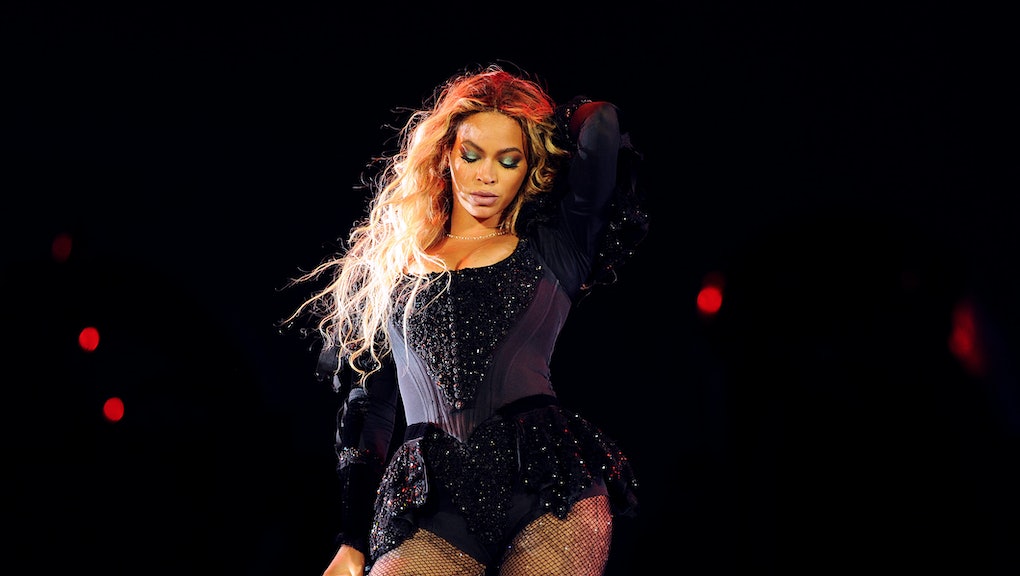 A New York woman says she was handcuffed and removed from a performance of Beyoncé's Formation World Tour at Citi Field on Tuesday because her female partner used the men's restroom.

According to 26-year-old Allison, who declined to use her full name for fear she might face repercussions at work, stadium security guards refused to explain why they had allegedly forced her girlfriend, Siobhán, from the men's restroom and directed her to leave the premises. The couple claims Citi Field security guards singled out Siobhán among many women who opted to use the men's room in the face of "excruciatingly long" lines for the women's facilities.

"[The security guards] said that I had to be ejected because I wasn't allowed to go in the men's [restroom] and I did," Siobhán said in a phone call. "[They] didn't mention a policy or rules or anything — just kept repeating, 'Get your stuff and let's go.'"

The security guards then confiscated Siobhán's ticket, she said, prompting Allison to intervene. "When I continued to ask these questions, and said that many women, including myself, had been using the men's restroom throughout the night, the security officers told me I was now also being thrown out and police would be called," Allison said by phone on Wednesday.

While both Allison and her partner identify as cisgender women, the pair believes the incident erupted because of the security guards' speculation about Siobhán's gender identity. The incident comes two months after New York City announced that it would ban municipal employees from checking or inquiring about people's gender as they attempt to use the restroom. Technically, however, that policy does not apply to employees at Citi Field, which is privately owned by the New York Mets Major League Baseball team.

Measures like New York's are part of a larger push nationwide to ensure safe bathroom use for trans people. Last month, President Barack Obama issued a historic declaration urging public school districts to allow students to use restrooms in accordance with their gender identity.

Although the stadium's security guidelines state that "disorderly guests" are "subject to ejection and arrest," Allison claims neither she nor her partner had been disorderly. When she told the police she wanted to know if Citi Field had a policy prohibiting women's use of men's bathroom facilities, the officer reportedly took her into custody.

"I told him that I wanted to know exactly why I was being asked to leave, at which point he told me to turn around and handcuffed me," Allison said. "I was then separated from my friends and taken to a holding area, where eventually a supervisor came and told me that they had decided not to arrest me."

A Citi Field spokesman declined to comment on the incident. The stadium's website does not specify any policies prohibiting the use of restrooms based on a person's gender.

Allison was released from police custody after about 20 minutes, then taken to the stadium gate and told she could not return to the concert. She and Siobhán, along with their friends, left Citi Field approximately half an hour after Beyoncé took the stage.

"I told him that I wanted to know exactly why I was being asked to leave, at which point he told me to turn around and handcuffed me."

Although the couple does not believe Siobhán was targeted because the security guards confused her gender identity, they say the lack of explanation for their ejection from the stadium — not to mention law enforcement's quickness to place Allison in handcuffs — has left them deeply unsettled. According to Allison, even though the repercussions were mild compared to the violence, harassment and abuse many people face simply for trying to go to the bathroom, the way Citi Field treated her and her girlfriend was completely unwarranted.

"I don't remember the last time I was so angry," Allison said. "They literally wouldn't give me any information [about why we were being removed]. ... I can't believe I missed Beyoncé because some old white dude was policing where I pee."