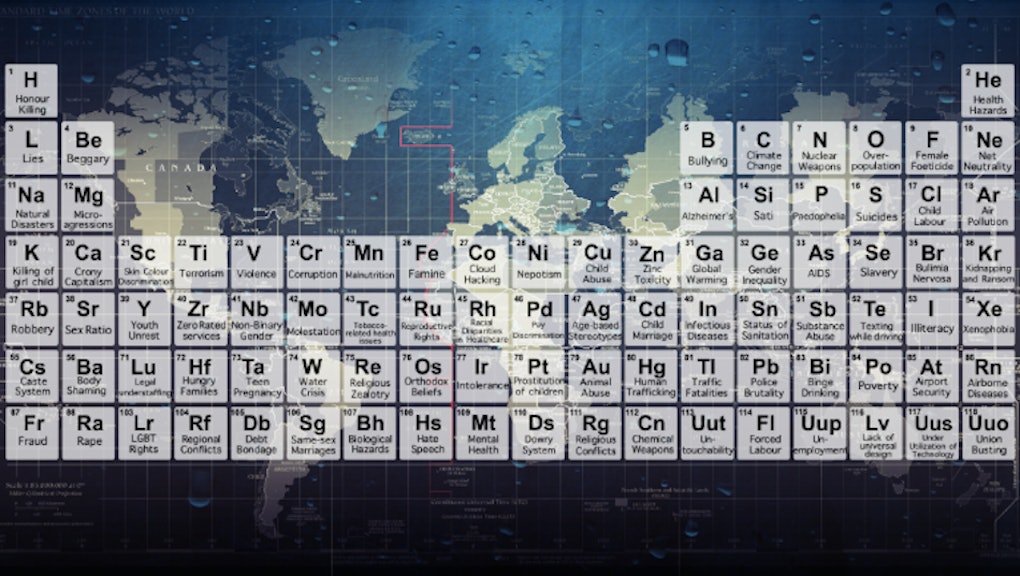 Kaanchi Chopra just made remembering all of the elements on the periodic table a little easier — and ignoring the world's issues a little harder.

When the 17-year-old student from Delhi was studying the elements, she realized that each symbol on the table could correspond to a social ill or injustice of some kind.

On Chopra's periodic table, "C" stands for climate change instead of carbon; "O" for oxygen becomes "O" for overpopulation; Boron's "B" takes on bullying.

The acronyms "could be expanded to form a word which represented one of humanity's worst vices," writes Chopra on her website. "A few words in this table also represent the various movements and social issues which have gained a lot of attention in the recent times."

On her site, Chopra highlights Alzheimer's, pedophelia, nepotism, xenophobia, nonbinary gender, lack of universal design (or the lack of accessible spaces) and binge drinking, including definitions, statistics and even solutions.

"I made this table to spread awareness about these issues and the immediate need to work harder to solve them," Chopra told Mashable. "I hope to encourage people to become more inclusive and talk about these movements and rights more openly."

Read more: 30 Second of This Music Student's Song Had Pharrell in Tears