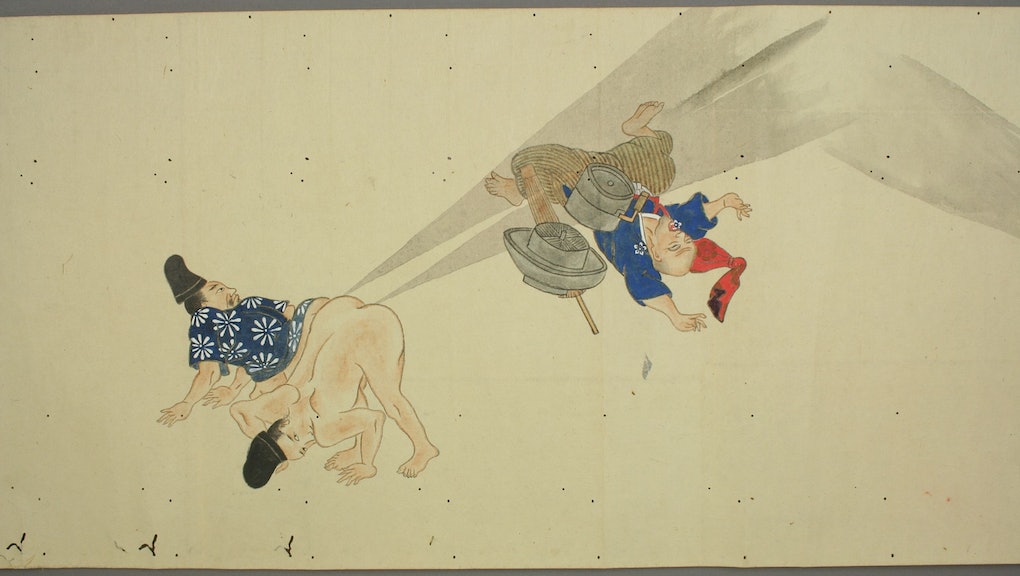 These scrolls put the "art" in "fart."

Yes, they are real, and yes, the figures in these artistic renderings are passing gas at one another. They're part of a scroll called the He-gassen.

Reportedly created in the mid-1800s, during Japan's Edo Period, this scroll could have been locked away in an archive or hidden away in a museum to languish in obscurity, but thanks to the internet, it's online for everyone to see.

And you really should see it. It's unbelievable.

Check out this fart attack:

Look at these farts powerful enough to punch a hole through a wall:

And check out these jerks ruining a perfectly good pot of tea:

The women got in on it too:

Hold on to your cats. Nothing is safe.

Is there a deeper meaning?

He-gassen is actually hilarious scatological satire. According to the Huffington Post:

The bizarre act of farting was likely used comically to shed light on the politics of the day — the gas is thought to have been a metaphor, referring to the rampant xenophobia of the Tokugawa shogunate.

A 1986 article in the Chicago Tribune explains further:

During the Tokugawa shogunate ... Japan was effectively sealed off from the rest of the world. The nation`s all-powerful shoguns expelled thousands of foreigners or restricted their presence to the port city of Nagasaki. Then they proceeded ruthlessly to stamp out such Western influences as Christianity and the enlightened political and social philosophies that were beginning to emerge in Europe.

According to Open Culture, the flatulence made fun of Westerners' influence:

Japan was closed off from the outside world and they were feeling more and more pressure from the West until finally American gun boats led by Commodore Matthew Perry forced the country open in 1853. What better way to thwart these Western interlopers than with a cavalcade of industrial strength gas?

Where can I find the whole thing?

Photos of the scroll are available online thanks to Waseda University Library in Japan.

As Tofugo pointed out, scrolls like these have been sold at auction for more than $1,500. A small price to pay for such a memorable piece of art.