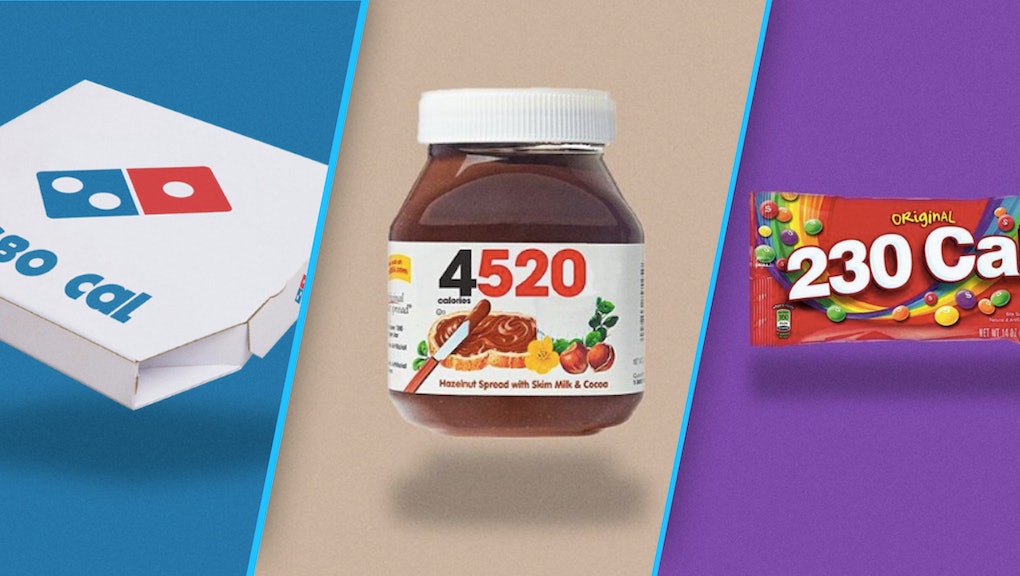 When Junk Food Logos Are Replaced With Calorie Counts, Even Nutella Looks Unappealing

Consumers usually have to physically turn over a product to examine the nutrition facts that hide on the back of its packaging.

But one Instagram account called @caloriebrands is flipping the script when it comes to junk food packaging.

The masterminds behind this account are Alessia Mordini and Rodrigo Domínguez, two advertising students at the Miami Ad School Madrid. The duo replaced brand logos with calorie counts in realistic recreations of food packaging. They manage the account in their spare time.

"Every nutrition fact in products gives the information in the little space behind the pack and it doesn't reveal the exact amount of the full product," they wrote in an email. "We though it would be interesting for the people to see how products would look like if the calories of the whole snack were shown as a logo."

Some more of the foods packing the highest number of calories per package are shown in the Instagrams below:

Would prominent calorie counts make any difference for the average American's diet?

Research on calorie labeling in restaurants suggests that consumers don't make different choices even when they're face-to-face with the cold, hard numbers. A study from NYU Langone Medical Center found that New Yorkers haven't consumed fewer calories since the city ordered chain restaurants to display calorie counts on menus.

Even so, the illustrations from Mordini and Domínguez would probably give consumers pause. Because who wants to be reminded that they're wolfing down 1,200 calories the next time they're eating an entire pint of Ben & Jerry's?

The Food and Drug Administration recently revealed a nutrition label overhaul, in which calories will be printed in a larger font but will remain on the back of the package.

Mordini and Domínguez said they plan to keep posting illustrations each day for as long as they can.