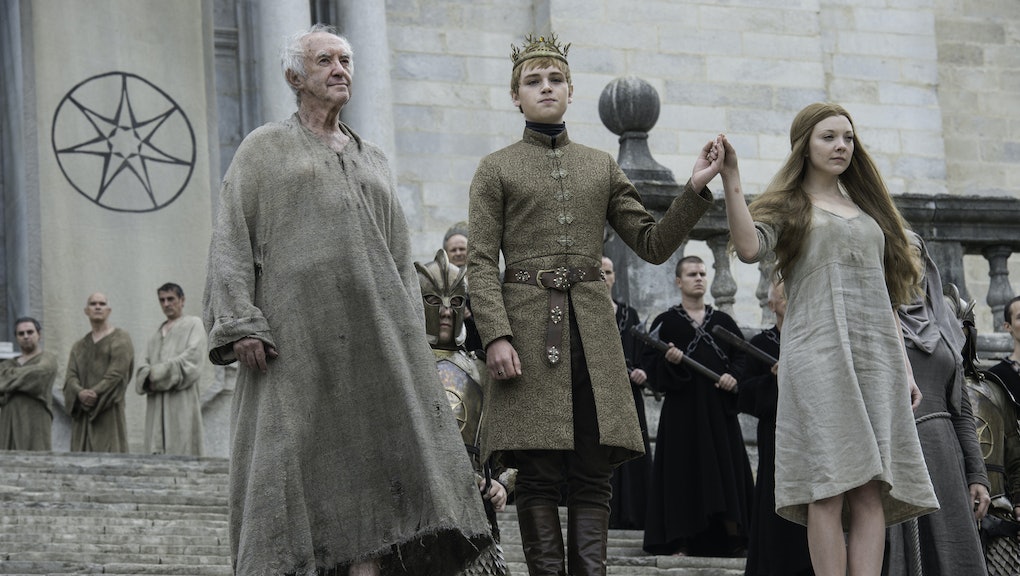 Tommen has now sided with the High Sparrow, the leader of the Faith Militant, that, among other things, forced his mother to atone for her sins by walking naked on the streets of King's Landing. The common folk are certainly happy with the alliance between the Crown and the Faith, but Cersei and Jaime aren't, with the latter stripped of his title as Lord Commander of the Kingsguard.

Cersei and Tommen have had, at best, a contentious relationship since he became king. But though their communications have frosted over since he took the throne, many characters contend that one of Cersei's redeeming characteristics is her love of her children. This fact would make it all the more heartbreaking if Tommen, her last surviving child, were to die this season — even more so from an unlikely source.

But that's the theory from Redditor Matt_Something, which posits that Cersei's trusty, Frankenstein-esque bodyguard, the Mountain, will murder the king. How? Prepare to have your mind blown — or more fittingly, your head smashed.

The theory puts the conflict between Cersei and Queen Margaery to cause a further rift between Cersei and Tommen. However, as the user writes, "[the Mountain's] blind obedience to Cersei knows no other loyalty, not even to that of his King." Until now, we haven't really seen the extent to what the Mountain can comprehend and process — all we know is that he's compelled to crush any and all of Cersei's enemies.

But would he be able to distinguish an actual threat to her life from a squabble between a mother and son? Cersei and Joffrey had their fair share of arguments — she even slapped him once in the series, much to the audience's delight — but she was never in any danger, and she certainly isn't at the hands of a timid Tommen.

At surface level, it might be a stretch to assume so much of the Mountain and what he can understand, but it harps back to the dreaded witch's prophecy hanging over Cersei's head. According to the prophecy, she will lose everything to a future queen (Margaery: check) and all of her children will die. Specifically, though, "gold will be their crowns, gold their shrouds."

Joffrey and Myrcella were already killed, and the prophecy rings true for both. Joffrey was the king, with a gold crown; Myrcella wore a gold dress at her funeral. The theorized gold for Tommen, then, isn't his crown, but the Mountain himself, who dons shiny gold Kingsguard armor.

Moreover, the theory, which was posted to Reddit a month ago, is even more relevant in light of the preview for Sunday's episode, "No One." It's shaping up to be the episode where Cersei finally unleashes the Mountain's wrath on members of the Faith Militant, with enough in the preview to show that we should expect to see at least a few of them wiped out, brutally.

The audience might enjoy this move, but Tommen's new alliance with the Faith (that hadn't occurred when the theory was placed on Reddit) means this power play will only cause problems between him and Cersei. Perhaps, even, the catalyst for his eventual, gruesome demise.

It's an interesting theory, although there are other ways in which Tommen could die. Others theorize it could be Margaery, who has been playing her own games with Tommen and the High Sparrow; the Sand Snakes (who were last seen in King's Landing and hate the Lannisters); or the High Sparrow himself.

What's unanimous, however, is that we should expect a new player on the Iron Throne soon.