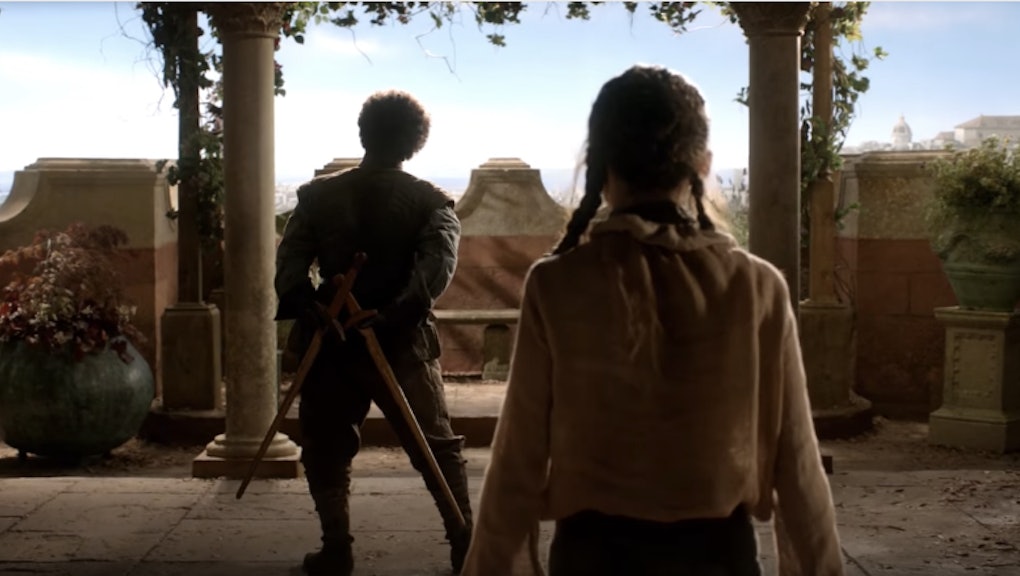 There are seemingly endless Game of Thrones fan theories on what happened to Arya Stark after her bloody confrontation with the Waif on Sunday (or whether that really was her). Regardless of which one fans are drawn to, all conclude that Arya Stark's narrative is not ending with a shocking death anytime soon. Six Stark-centric seasons in, we're too invested in her diversion to the House of Black and White to think otherwise.

But a girl is still on the run from the Waif, and quite simply, in fear for her life. How could she escape a Faceless Man who holds a grudge against her? Perhaps from an unlikely and presumed dead source. The Game of Thrones fan site Watchers on the Wall posted photos for the upcoming episode "No One," some of which have also been released on the HBO media relations website.

One image not available on HBO's press site (which Mic has access to) shows the Waif, dagger in hand, and the silhouette of a man behind her. What's noteworthy, however, is that the figure bears some likeness to Arya's water dancing teacher from season one, Syrio Forel.

Judging from this Reddit thread started by user b_walker08, fans are clearly on board with the notion that Syrio has made his return. One comment on the thread took the theory even further by comparing the silhouette to Syrio from season one, and the resemblance is striking.

Syrio's return six seasons in would be quite a shock — though if it were to happen at any point, it would be this year. Resurrection has been the primary theme of this season, with Jon Snow, Benjen Stark and the Hound already returned. Plus, others are convinced still that we're going to see Lady Stoneheart by season's end.

It certainly helps that Syrio's presumptive death at the hands of Ser Meryn Trant occurred off-screen, which has given credence to theories about how he might have survived. The most popular of which posits that Syrio is actually Jaqen H'ghar, and — if that comes true — perhaps this image ties into the reveal. (Though it should be noted that this theory was shot down by the show-runners).

However, especially because HBO didn't release the image themselves, the photo and subsequent rumors should be taken with a grain of salt. Moreover, even if it were real, it could just as easily be an extra who is physically similar to Syrio.

Of course, maybe Syrio just decided to tell the God of Death, "Not today."

Mic has reached out to HBO for comment, and will update this story as it develops.