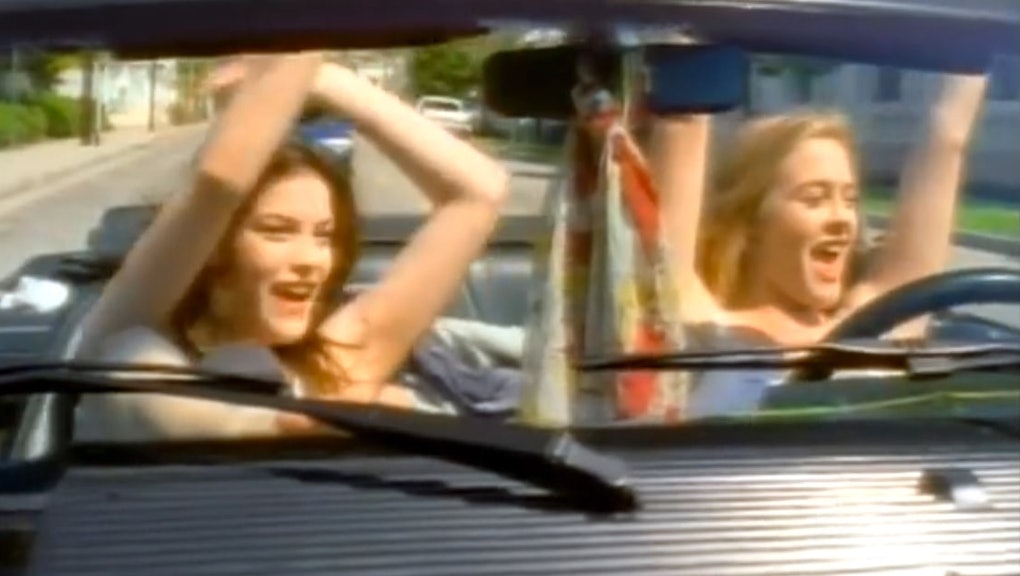 An Ode to "Crazy," the Ultimate 90s Ode to Female Friendship and Empowerment

In 1994, Liv Tyler and Alicia Silverstone blessed us with their shared performance as an iconic pair of badass teen besties in Aerosmith's music video for "Crazy." Now, 22 years later, they have blessed us with a black and white selfie featured on both of their Instagram accounts.

"Look who came to visit today!" Tyler wrote in her caption. "A lovely reunion with my girl," Silverstone wrote in hers, which also featured a throwback pic of them as teens.

It's fitting that the music video appears to have resulted in a lifelong friendship between Tyler and Silverstone. Because at its core, the power of female friendship is what the entire video was all about.

Aerosmith released "Crazy," otherwise known as the single greatest music video of all time, back in 1994.

The clip follows a pre-Empire Records Tyler and a pre-Clueless Silverstone as a pair of hot Catholic schoolgirls who skip class to go on a carefree adventure in a black convertible. If you have somehow lived the past 22 years without seeing it, heal your obviously broken life and watch it right now.

Given Aerosmith's predominantly male fan base and the fact that it came out in the early nineties, the standard interpretation of the video has always been to dismiss Tyler and Silverstone's characters as nothing more than a pair of rock and roll sex objects, or perhaps a "hyper-sexualized, underage, ambiguously lesbionic duo."

But a closer look at the video's narrative indicates that it actually tells the tale of the most fun-loving, inspirational, chicks-before-dicks-y friendship ever. Boys barely even factor into the world of "Crazy." All the men who do appear in the video serve as nothing more than a means of money, amusement or free shit for our vivacious protagonists.

Whether it's Liv suggestively pumping gas so that she can fill up Alicia's tank for free or Alicia dressing up as a man at a strip club so that Liv doesn't have to give a lap dance to an actual dude, the girls' loyalty to each other is consistently on display throughout.

The vibe of "Crazy" echoes that of another friendship-oriented classic of the early nineties: Thelma and Louise, in which Susan Sarandon and Geena Davis star as best friends who shoot a rapist (and do lots of other illegal stuff) on an epic road trip.

With the women's friendship serving as the heart and soul of the movie, it quickly became a feminist classic. When Thelma and Louise debuted in 1991, Roger Ebert wrote that he felt like the fictional duo was "shouting at the maw of the universe that men are no longer going to make their decisions for them."

One could say the same thing for our boyfriend-less teen heroines of "Crazy." After all, the only people they ever make decisions for are each other.

The fact that "Crazy" resulted in an actual lifelong friendship behind the scenes just makes it that much more perfect. When the video turned 20 a couple years ago, Tyler even pondered the idea of a modern-day recreation of the video in an interview with MTV News.

"Me and Alicia walking around, the MILFs or something?" she joked. "With our children running around behind us?"

While that may sound amazing, we'll take what we can get and settle for a good old fashioned Insta selfie.