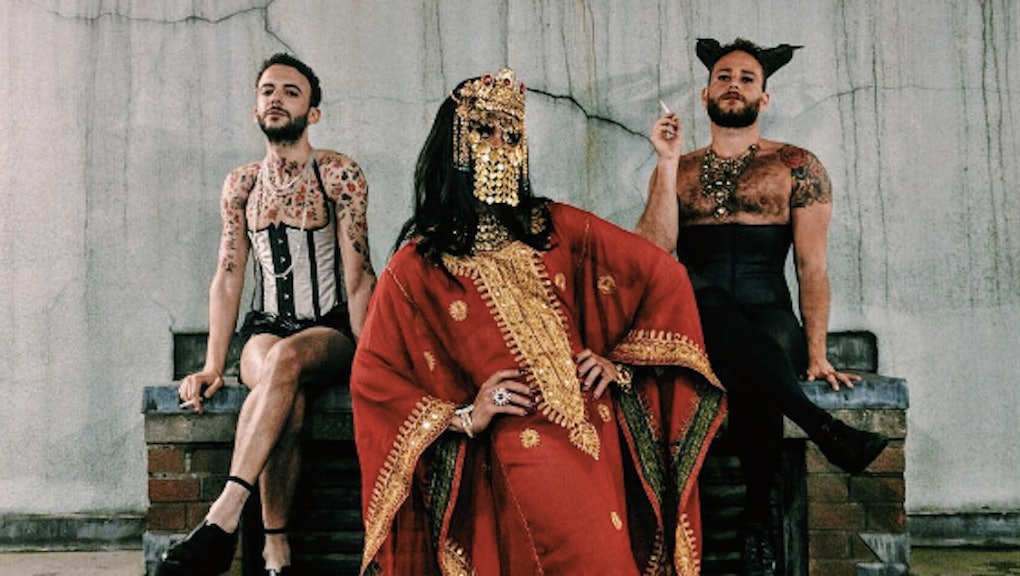 A photo of three Arab men in drag is going viral in the wake of the Pulse nightclub shooting, the largest mass shooting in American history.

Eman A, a U.K.-based photographer and artist behind the photo, took the picture of three friends posing near a rustic fireplace in drag. One man wears horns and smokes a cigarette; the other has low-cut shorts and a halter top; the subject in front is wearing a gown called a jalabiya and face mask with decorative gold ornaments, striking a fierce pose with their hands placed in front of their hips.

It's a shot that embodies strength, resilience, beauty and complexity. And it was the perfect backdrop for writer Salem Haddad's heartfelt Facebook post on the Orlando massacre, who wrote, "My heart goes out to the victims of the homophobic attack in Orlando. So here is a photo of three Arab men in drag. Because fuck homophobia and fuck Islamophobia, and fuck the hypocrites who use one to justify the other. You all have blood on your hands."

"And if this photo offends you, you have blood on your hands too," he concluded. The photo has received over 9,000 likes and shares.

"And if this photo offends you, you have blood on your hands too."

Eman didn't realize her photo, taken the same night of the shootings, would have such an enormous impact online.

"Woah, I came out of the cinema and all hell has broken loose on social media," the photographer wrote in an Instagram post. "This is a photo of my beautiful friends that I took on Saturday night expressing themselves openly and freely and not a staged one of them 'posing in solidarity'. I'm dizzy. My thoughts and prayers go out to all the families of the victims. So much hate in people's hearts it makes me sick. When will the ethnic, religious and sexual hate and prejudice stop?"

Sunday morning's early shooting Orlando gay nightclub left at least 50 dead and another 53 wounded. Omar Mateen was identified by authorities as the suspect behind the shooting, a 29-year-old whose father said the sight of two men kissing once enraged him, and that "this had nothing to do with religion," he said.

Mateen has reportedly claimed allegiance to ISIS, which has claimed responsibility for the attack.