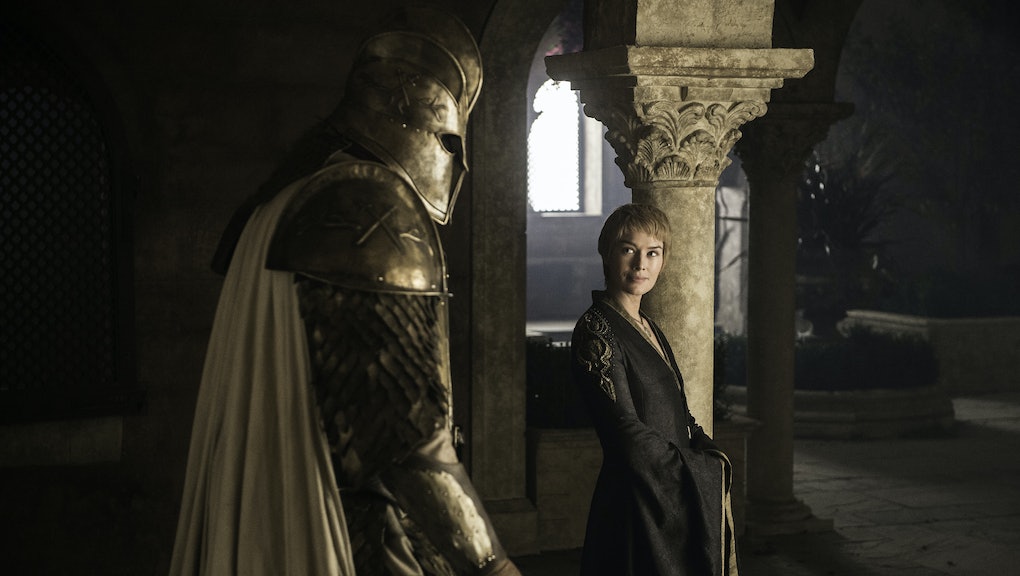 It's tough to call a show like Game of Thrones "fan servicey" when its writers seem to love torturing, raping and murdering beloved characters — but season six has been a departure from the norm in several ways. For one, the series has all but surpassed the plot progression in George R.R. Martin's novels, and is moving at a frenetic pace where characters can jump all over the Westerosi map from one episode to another at its convenience.

This, too, has led to the return of several characters and storylines long dropped, such as Jon Snow's resurrection; the return of long-lost characters like Benjen Stark and the Hound; and areas of the map we've ignored for years — namely, Riverrun and the Iron Islands. Even smaller moments, like the incessant flirting from Tormund in the direction of Brienne, seem there purely to entertain the fanbase.

However, "No One" was a stark reminder that the series — as the episode title indicates — doesn't cater to anyone. In particular, two long-held theories that appeared inevitable were swiftly shot down. And if we're to believe Game of Thrones is in the home stretch, with as few as 13 episodes to go in the next two seasons, they might never be addressed on-screen. Here are two highly popular show theories that, while still not impossible, are now extremely unlikely.

Cleganebowl: The Hound's return in the previous episode laid credence to a highly popular theory for both the novels and the show: Cleganebowl. Essentially, this would pit the Hound against his now-zombified brother, the Mountain, in an epic trial by combat — with the former representing the Faith and the latter Cersei Lannister.

The Clegane brothers appear to have a lot of fighting ahead of them, just not with one another. Cersei was relying on the Mountain's brute strength to claim victory against the Faith in a trial by combat (and few in Westeros would even stand a chance, the Hound being one of them).

However, the High Sparrow's influence on King Tommen proved key. In unsurprisingly convenient timing, Tommen decreed that trials by combat are a barbaric practice no longer allowed, and this ruling throws Cersei into a corner. She may still get out of her trial — some theorize with the help of wildfire under the Red Keep — but it may come down to her own actions, rather than the Mountain's. Though at least he was able to rip off the head of a Faith Militant member to let off some steam.

The Hound, meanwhile, came face-to-face with the men that once tried to kill him: the Brotherhood Without Banners. Given the massacre of Brother Ray's group in episode seven, it appeared as if the Brotherhood had abandoned its mission of helping the smallfolk and instead were intent on their own survival. The men who attacked Brother Ray and Co., however, went rogue, and were being executed for their crimes by Thoros of Myr and Beric Dondarrion when the Hound intervened.

Thoros and Beric want the Hound the join them, as they want as many men as possible while they head North to the Wall — apparently, they've caught wind of the White Walker threat themselves. Oddly, despite literally killing Beric (only for him to be brought back to life) in season three, the Hound is a suitable fit for the current Brotherhood.

However, if the Hound joins the Brotherhood, as "No One" indicated, that would mean he'll be heading North — and thus, farther away from his brother. While it may not be the return fans expected, the Hound could still be an important catalyst for a conflict that's, quite frankly, much more important than the political games in King's Landing. As Ser Davos noted in the previous episode, the war between the living and the dead is the most important of all. Perhaps it's better a fighter as capable as the Hound is heading that way, too.

(Editor's note: Spoilers ahead for Martin's A Song of Ice and Fire novels).

The appearance of Lady Stoneheart: The Brotherhood's on-screen return ostensibly dispelled the long-anticipated resurrection of a book character: Lady Stoneheart. In the novels, Lady Stoneheart is the zombielike form of Catelyn Stark, slain during the Red Wedding but brought back to life to lead the Brotherhood to exact vengeance on the Freys.

But Lady Stoneheart's return hinges on the death of a character who was reintroduced. Beric sacrifices his own life to bring Catelyn back, but here we see him still in charge of the Brotherhood. What's more, while we don't know exactly how much time has passed since the Red Wedding in the show, Catelyn's body is found three days after the event. It's obviously been more than a few days, and if Beric is still around, it's not as if they'd find her corpse now.

Rather, it appears HBO is more content with endlessly teasing its book-reading fanbase about Lady Stoneheart, and they were at their most deliberate here. The Brotherhood are hanging people now — Lady Stoneheart's trademark form of execution. Moreover, several conversations in "No One" revolved around Catelyn, in discussions between Brienne and Jaime, Jaime and Edmure and Brienne and the Blackfish.

They certainly wanted us to remember Catelyn's ferocity and character, but served apparently little purpose beyond narrative exposition. In Jaime's case, it was a callback to the initial conflict between the Lannisters and the Starks, and the fierceness of both Cersei and Catelyn for their children.

Yet Cleganebowl's unlikelihood and Lady Stoneheart's absence don't detract from what's been one of Game of Thrones' strongest seasons to date. Instead — much like the news of the show potentially ending in two years — it's evident that the showrunners aren't going to change their conventions just to please fans.

The show's not going to last forever, and not every conceivable meeting or fight on the fans' wishlists will bear fruit. But there are still moments that can satisfy both showrunners and fans. Viewers can take some necessary solace with what's going down in the next episode: We're getting the much-anticipated "Battle of the Bastards" between Jon Snow and Ramsay Bolton.

Where we lost two theories, we're going to gain an epic battle — and in the meantime, Twitter can hardly contain its excitement.