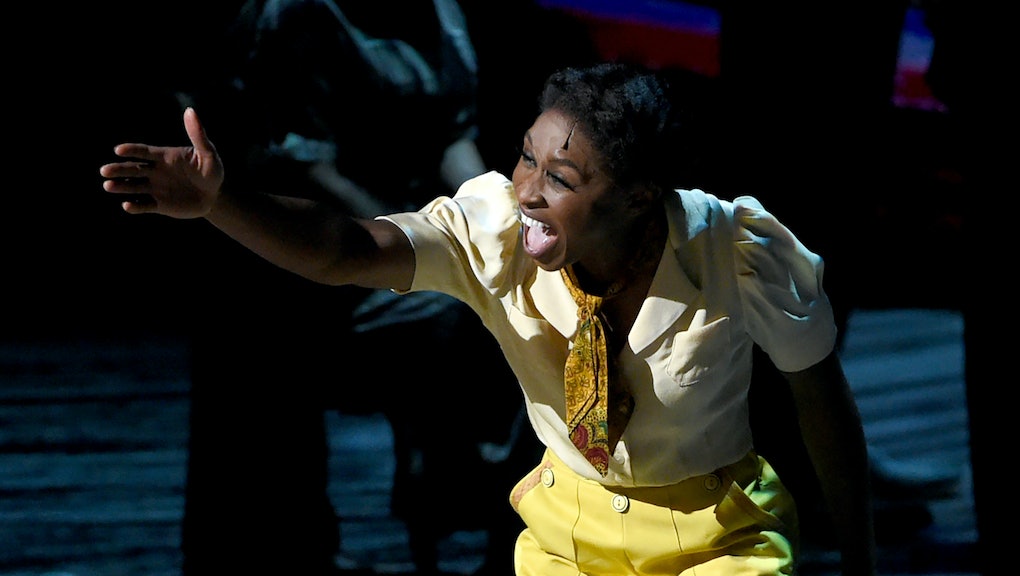 It was impossible not to think of the Orlando, Florida, mass shooting while watching the 70th annual Tony Awards Sunday night. There were reminders everywhere, from ribbons adorning attendees' dresses to the content of acceptance speeches.

The show set the tone right at the start, with host James Corden dedicating what would follow to the victims of the shooting at Orlando gay club Pulse. "Hate will never win," he said. "We have to make sure of that. Tonight's show stands as a symbol and a celebration of that principle."

It's to the show's credit, however, that even after a somber beginning, the Tonys never felt like a dour eulogy. Instead, they were a joyous celebration of pride, and of an art form where queer people have often felt most welcome: theater.

Messages of love and acceptance dominated the proceedings. Corden started the show with a number that highlighted how kids of all backgrounds find a home in theatre. He was followed by an emotional Lin-Manuel Miranda, accepting the best score Tony for Hamilton with a sonnet dedicated to Orlando.

Then there was Frank Langella, who used his acceptance speech for best actor in a play to reassure Orlando that the Broadway community stood with them.

"Today in Orlando, we had a hideous dose of reality," the actor said. "I urge you, Orlando, to be strong. Because I'm standing in a room full of the most generous human beings on earth. And we will be with you every step of the way."

And then there was Cynthia Erivo.

Erivo, a member of the history-making quartet of musical acting winners, performed her signature The Color Purple number "I'm Here." In the show, Erivo's character Celie is a queer woman who is constantly disparaged, used and told she's ugly. "I'm Here" is a moment of overwhelming defiance, of declaring that she loves herself — that she is beautiful.

Onstage last night, the performance was a total knockout. Part of that was in her vocal performance, flawless as it is eight times a week at the Bernard B. Jacobs Theatre on Broadway. But the other part was in the song's message, more resonant than ever: "Most of all, I'm thankful for loving who I really am. I'm beautiful, and I'm here."

The motive behind the Orlando shooting is clear: It was an act of hate upon and against queer people, who have dealt with hate for centuries. It was meant to inspire fear. If a deliberately queer space like a gay club — on Latin night during Pride Month, no less — isn't safe, where is?

But here's the thing about queer people: While we've been the recipients of hate for so long, we've never given up. We, like Celie, take deep breaths, hold our heads high, put our shoulders back and look those who would seek to terrorize us straight in the eye.

Sunday night's Tonys were a celebration, but they also sent a clear and powerful message: Acceptance will win the day. Each battle can feel more difficult than the last, but none have been insurmountable. Pride isn't just a month; it's a feeling. It's a community united by that feeling. One can find that community in theaters, in gay bars, in friends and in family.